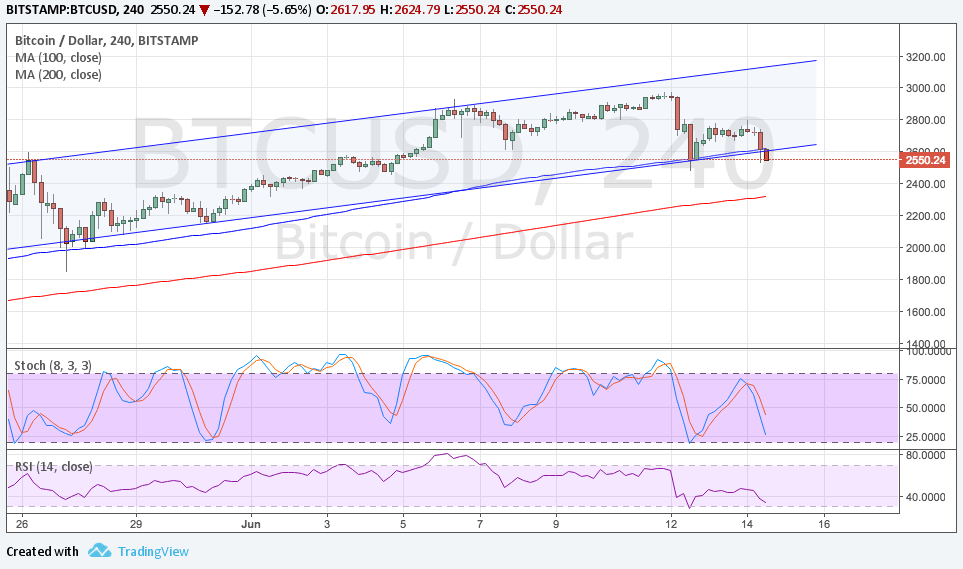 Bitcoin price is starting to break below key support levels, signaling that bearish pressure is picking up.

The 100 SMA is above the longer-term 200 SMA on this time frame so the path of least resistance is to the upside. In addition, the 100 SMA lines up with the channel support around $2500-2550, adding to its strength as a floor.

This means that a break below the support area, which has previously served as resistance, could mark a significant return in selling momentum. Bitcoin price could be on track towards testing the 200 SMA dynamic support at $2300 next.

Stochastic is pointing down to indicate that sellers are on top of their game and could push for more bitcoin price losses. RSI is also heading south after cruising sideways for some time. US economic reports actually turned out weaker than expected and led to dollar losses in the forex market, so it’s surprising to see the currency advancing against bitcoin. This could be because traders are expecting weaker rate hike expectations beyond June, something that is supportive of business and consumer activity.

Still, the bigger catalyst is the FOMC statement during which the Fed could shed more light on its future policy plans. A 0.25% rate hike is in the cards but traders are more interested to find out what’s lined up for the latter half of this year.

For now, the main factor dragging bitcoin price down is Goldman Sachs’ bearish forecast on the cryptocurrency. “It’s on track to forming a bearish key day reversal if today’s (June 12) close settles below 2,749. It will also form a key week version if Friday’s close is below 2,475. Both daily/weekly oscillators are diverging negatively. All of this to say that the balance of signals are looking broadly heavy,” chief technician Sheba Jafari wrote.