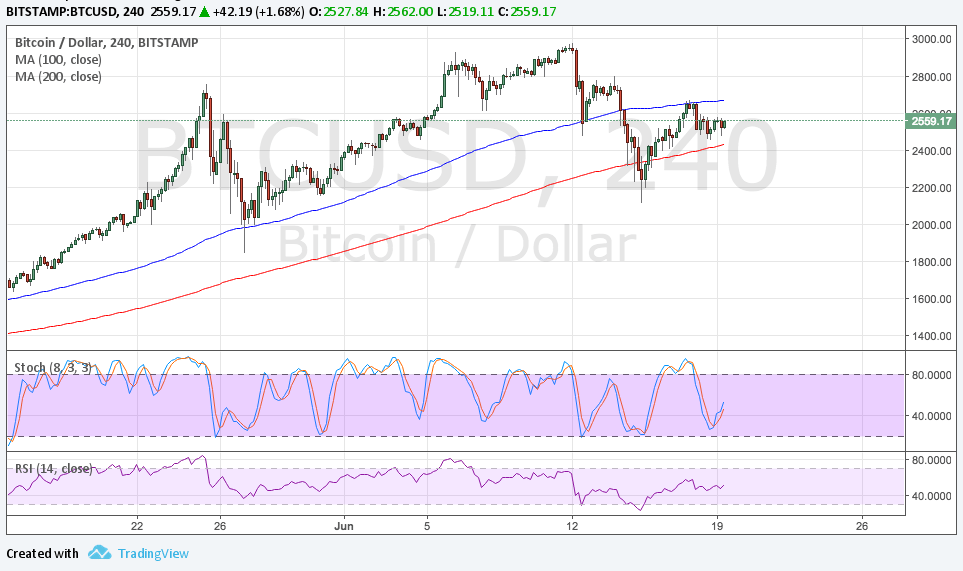 Bitcoin price seems to be forming a head and shoulders pattern on its 4-hour time frame, signaling that a long-term selloff is in the cards.

Price is finding resistance at the 100 SMA dynamic inflection point and if it is able to keep gains in check, bitcoin could fall back to the recent lows around $2200. A break below that level, which is also the neckline of the reversal formation, could confirm that bearish momentum is kicking into high gear.

Note that the potential head and shoulders span $2200 to $3000 so the resulting selloff could last by $800, taking bitcoin price down to $1400. However, the 100 SMA is still above the long-term 200 SMA so the path of least resistance is still to the upside.

With that, a break past the 100 SMA dynamic resistance around $2700 could take bitcoin price back up to the all-time highs and beyond. If bears regain control from here, the right shoulder could be completed soon.

Stochastic is pointing up to indicate that buyers are regaining control of the game even without hitting oversold conditions. RSI, meanwhile, is treading sideways to suggest that consolidation could be underway. The gap between the moving averages is still sufficiently wide so there seems to be no immediate chance of a downward crossover just yet. There’s not much in the way of US data that could influence dollar price action this week, although it’s worth noting that the special elections in Georgia could prove to be a barometer of support for the Trump administration. A win by a Democrat could lead to an unwinding of the Trump rally, which might be bearish for the dollar and bullish for Bitcoin price.

Meanwhile, Brexit talks and the Queen’s speech in the U.K. could influence overall risk sentiment, along with ongoing discussions to form a coalition government.