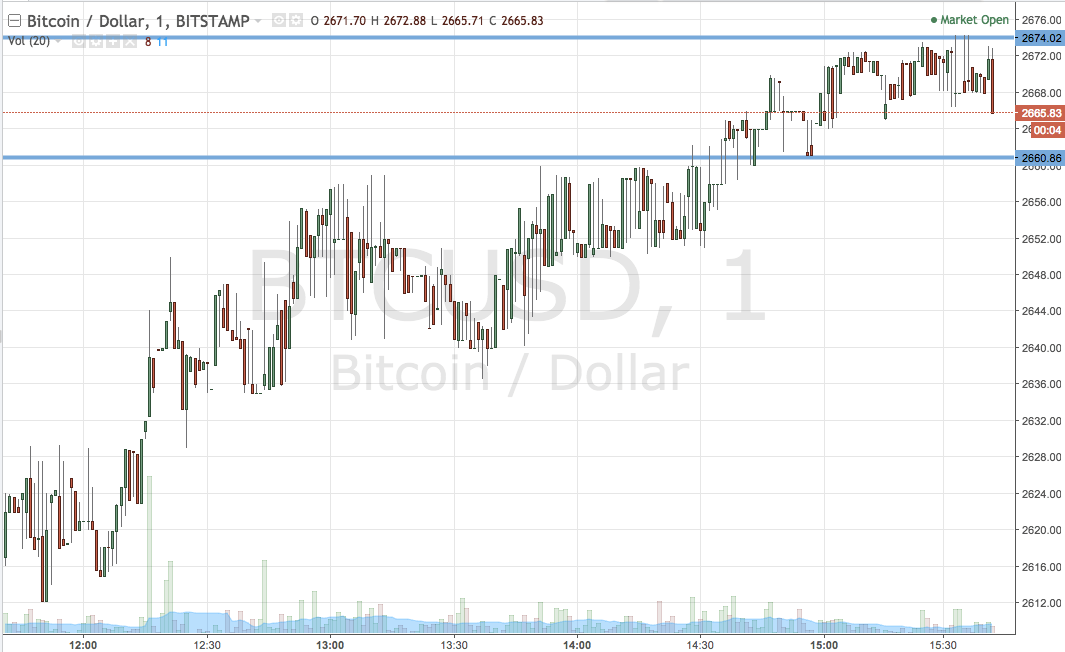 Another day done in the bitcoin price and things are really starting to get back on track in terms of long-term price appreciation. We’ve seen price run up from in and around 2550 earlier this morning (out of Europe) to current levels around 2670, with no real pullbacks or serious corrections. Those that have traded with us for a while will know that this sort of action is perfect for our breakout strategy – we can get in on breaks of key levels, set some tight stop losses and ride out the sustained run to a profitable exit (as defined by our preset take profit levels).

When we get the opposite of this, a sort of choppy/sideways trading type of price action, it’s a little more difficult to consistently draw a profit from the markets. With that sort of action, we generally have to bring our intrarange strategy into play. Why mention this now, after a day of solid runs? Because it’s after a run like this that we often see sideways action, as the markets consolidate and the shorter term operators take profits off the table.

We’ve got to keep in mind, then, that we might need to switch up the angle with which we are approaching the markets this evening if conditions change.

For now, at least, all we can really do is set up against what we see. So, take a look at the chart below to get an idea what’s on and where things stand right now. As the chart shows, the range we’ve got for this evening is defined by support to the downside at 2660 and resistance to the upside at 2674. We’re going to watch out for a close above resistance to get us into a long trade towards 2690. Conversely, a close below support will have us in short towards 2640. Stops on both trades define risk – several dollars either way.