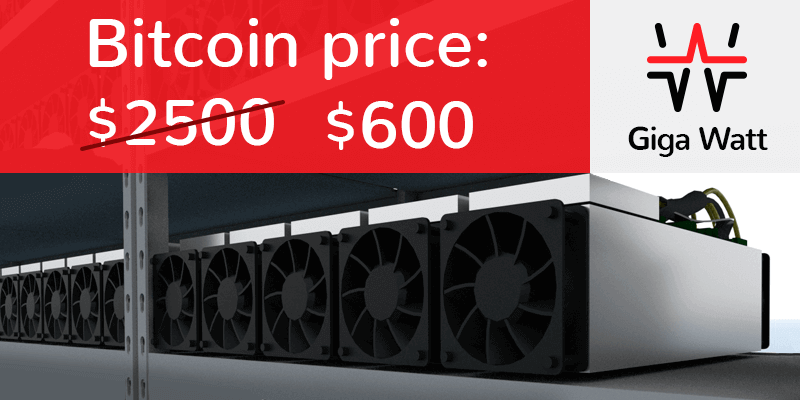 Cryptocurrencies can’t exist without mining. The miners are the backbone of the networks, providing the necessary processing power. Without them, none of the cryptocurrency transactions would be possible. But with the constant increase in mining difficulty it has become virtually impossible for individual miners to derive economic benefits from mining. As cryptocurrency mining gets more and more cost intensive, Giga Watt project has come up with an innovative solution, WTT tokens, which democratizes the mining process by making it more affordable.

Giga Watt has announced the crowdsale of its WTT crypto tokens, which went live on June 2, 2017, allowing cryptocurrency community and even newcomers to blockchain to become part of its initiative. The crowdsale, which will go on until July 31, 2017, is open to the public across the world. The cap is set at 30 million WTT, offered at a price range of $1-$1.2 during the ICO.

The WTT Token Launch is conducted by Cryptonomos platform, and the token holders are offered an opportunity to take advantage of the Giga Watt’s full-service mining solution at attractive prices. Each WTT token gives the owner access to 1 watt of the mining facility’s capacity for a duration of 50 years. The number of WTT tokens a miner would need to purchase is determined by the wattage of their particular mining equipment. Token holders can either choose to use the allocated power themselves to run their own equipment or rent it out to other miners and earn from it. In other words, WTT tokens represent space on the shelves to allocate mining equipment at the company’s facility. Also, WTT owners are charged a hosting fee at less than half the standard rates, which makes running own mining equipment more attractive.

The founder and CEO of Giga Watt Dave Carlson explained the advantage of the token sale initiative over other cloud mining services by saying,

“By tokenizing our mining infrastructure, Giga Watt is finally able to extend our huge economic advantage to anyone in the world, large or small, to run their own mining business and be successful by having our expert team build and manage it… This is a move to decentralize the global balance of mining power and put it back in the hands of the little guy. The home miner built bitcoin, and I want anyone to succeed as a true participant in the explosive growth of cryptocurrency mining.”

Giga Watt has announced that for every 100 WTT tokens sold in the ICO, the company will expand the facility’s capacity by 115 watts (15% extra). By factoring in the benefits, WTT holders can mine cryptocurrencies at less than half the price it would cost otherwise, which, when combined with the potential value appreciation, may bring huge financial benefits in the long term.

The platform has already sold over 9 million tokens in 15 days of the ICO, putting the capacity of the facility at around 10 MW. With this Token Launch, Giga Watt has gained the distinction of organizing the first ever hardware-backed ICO. And, given the increasing interest in cryptocurrency mining among the community and the people behind this project, Giga Watt token sale presents itself as an attractive opportunity for those who want to be part of this revolutionary concept.