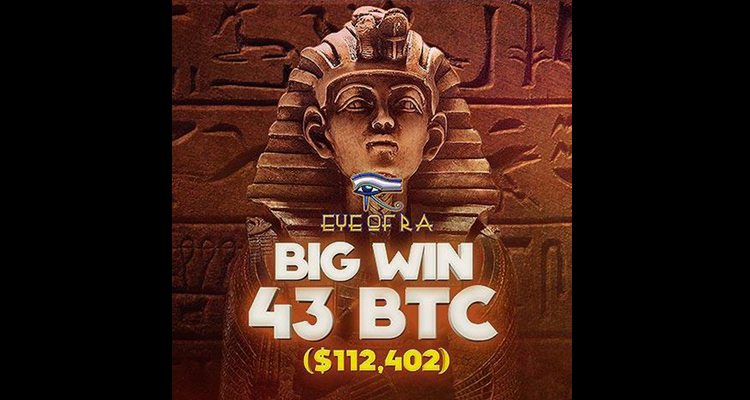 Next Article: Blockchain Raises $40M from Google Ventures, Virgin Group and Others

An evening of intense playing turned fortunate for a player, as he bagged a whopping $112,400 win from his online bets.

The crazy outcome took place at BitStarz, one of the leading online Bitcoin casinos, in one of their games. Amatic, as the group of games is titled, has been credited for resulting massive wins in the past. This time, it was Eye of Ra, an ancient Egyptian-themed game, which raked in a $67,522 profit for the lucky player.

BitStarz confirmed the aforementioned win as its third-largest till date, further claiming that 4 out of the 5 biggest wins on its casino has come from the Amatic games. The casino’s Marketing Manager, Srdjan Kapor, coupled his thoughts further, and chuckled as he said:

“Amatic, again? That was the first thing that crossed my mind when I saw this big win. It’s fantastic to see yet another player here land a massive win and at this point, I’m willing to put my money on that next big win will be on an Amatic game as well. Congratulations to the lucky player!”.

The massive wins have further validated BitStarz as one of the hottest casinos in the Bitcoin town. Their slots, specifically, continue to attract the players from all around the globe, mostly because of the sheer randomness in the outcomes and a higher probability of winnings they ensure.

“So, if you’re looking for the hottest slots provider out there, you can stop searching right now. It’s not a question of “If” these slots will pay out big again, but “when” they will do it,” added Kapor.

BitStarz has more than 850 games in its portfolio and is most known for their lightning speed cashouts with an average payout time of 10 minutes, as well as their personal customer service agents. It holds a gaming license issued from Antillephone N.V., based in Curacao.