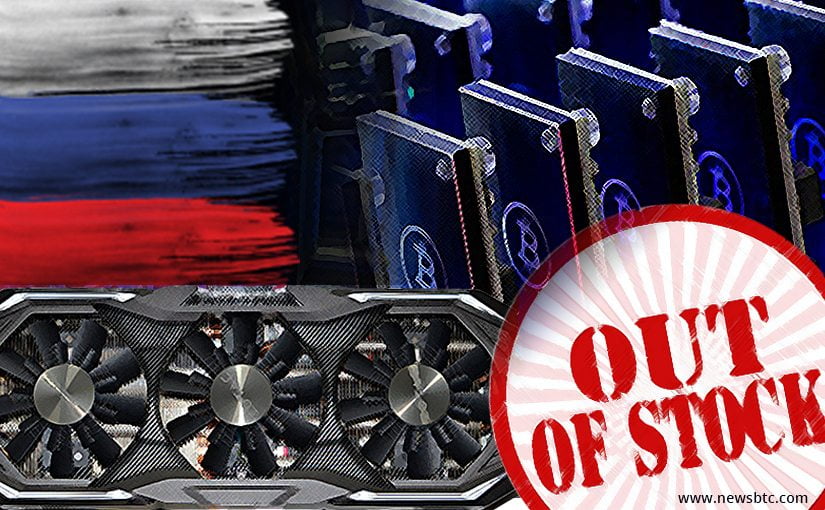 There is still a large shortage of graphics cards in various parts of the world. Things are getting out of hand in Russia, that much is evident. A new article shows how cryptocurrency mining in the country is picking up. As a result, the shortage of video cards becomes a lot more apparent. It is unclear if this situation will grow worse over time. For the manufacturers, this is good news, though.

About two weeks ago, it became apparent cryptocurrency mining is intensifying all over the world. Given the recent price surges of Bitcoin, Ethereum, and Litecoin, that is to be expected. Not everyone wants to buy specific hard to mine cryptocurrency. Instead, a lot of people are reverting to using graphics cards. This has become somewhat of a problem for the global supply of these products, though. Russia seems to be affected the most by this development right now.

Graphics Cards Supplies in Russia are Drying up

As we have seen over the past few weeks, prices for graphics cards are skyrocketing. That is only normal, as demand is intensifying as well. In Russia, GPU’s are up by as much as 80% in price. This affects both retail and second-hand prices. Some people are buying hundreds of graphics cards at once, which puts a lot of strain on the available supply. Manufacturers such as AMD and NVIDIA will not be too bothered about this sudden demand, though.

A lot of media outlets still think people buy graphics cards to mine Bitcoin. That is not the case, as GPUs have been incredibly inefficient for some time now. Instead, users will mine Ethereum, Litecoin, ZCash, or even Monero. All of these currencies can be mined easily with graphics cards. Users will still need a proper motherboard which supports as many graphics cards as possible, though. Setting up a GPU mining farm is not as easy as most people would think.

It is rather interesting to see this trend extend to Russia. The country has always had an uneasy relationship with cryptocurrency. Now that the country is keeping an open mind toward Bitcoin and consorts, mining is growing in popularity. It is good to see graphics cards getting more love, as they were rendered nearly obsolete not too long ago. Thanks to popular alternative currencies, this hardware gets a second lease on life.

Tags: Bitcoin NewscryptocurrencyGraphics Cardsminingrussia
TweetShare
BitStarz Player Lands $2,459,124 Record Win! Could you be next big winner? Win up to $1,000,000 in One Spin at CryptoSlots