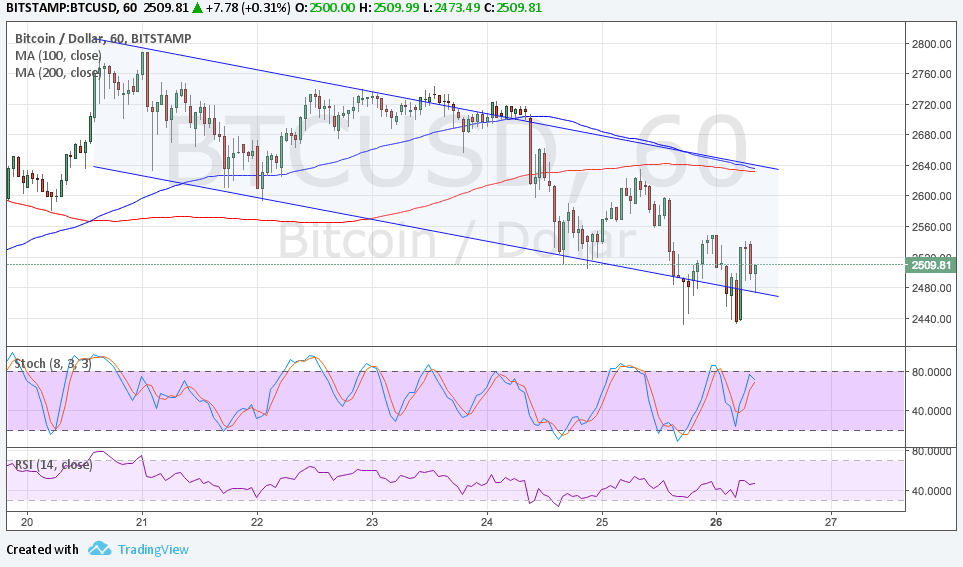 Bitcoin price is starting a new downtrend now that it broke below a short-term rising channel support.

The 100 SMA is above the longer-term 200 SMA for now but a downward crossover seems imminent. If this materializes, bearish pressure could kick in stronger and allow the selloff to carry on. In addition, the moving averages line up with the channel resistance at $2650.

Stochastic is still pointing up to show that there’s some buying pressure left. In that case, bitcoin price could still be able to pull up to the channel resistance before resuming its drop.

RSI is also heading north so bitcoin price could follow suit. Once both indicators hit overbought levels, bearish pressure could return and lead to another test or even a breakdown of support. There’s not much in the way of market-moving data releases or events on the calendar for the week, which means that traders could be extra sensitive to headlines and other catalysts. Apart from that, it’s almost the end of the month and quarter, opening up opportunities for profit-taking from the period’s moves.

Scepticism for bitcoin’s strong gains in the earlier weeks has weighed on its climb after Goldman Sachs analysts Sheba Jafari noted that the cryptocurrency was looking heavy while investor Mark Cuban warned that it could be in a bubble. Apart from that, the flash crash in Ethereum brought back investors’ misgivings about cryptocurrencies in general, dragging Bitcoin price down in the process as well.

These sentiments could continue to dampen gains for bitcoin in the next few days unless there is strong positive news that gives it a fresh boost. A few months back, Japan’s decision to accept bitcoin as a legal form of payment drove it to record highs.