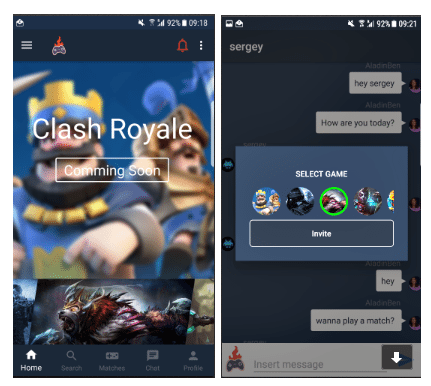 Blockchain community members, especially those belonging to gaming industry, are pleased to know that GameCredits and MobileGo eSports will be available on PC and mobile platforms very soon. This exciting announcement was made in a recent interview collaboratively responded by Sergey Sholom, the CEO of the GameCredits, and Aladin Ben, the Managing Director of GCeports. The interview also revealed the much-awaited updates about the development of GameCredits store, MobileGo and eSports. It is to be noted that the release of the mobile store was supposed to be followed by the launch of GCesports application.

According to the Sholom, this newly developed ecosystem, developed with MobileGo and GameCredits, is going to change the gaming industry, while Ben asserts that this brings a cutting edge technology that is accommodated with a lot of benefits for both gamers and game developers.

GameCredits Inc. is the global, multi-cultural entity, gathering experts from blockchain and gaming industry to develop the first crypto mobile gaming store, which is accessible as an android application. The store holds thousands of most popular mobile games, and has more than 300 games to be expanded to 1000s by end of 2017. GAME tokens are used to trade virtual items and content by the players in decentralized virtual market place of GameCredits. These credits can be purchased via credit card and other local payment modes.

It is the biggest eSports platform that GameCredits is going to be involved being a fast growing esports community.

GameCredits has acquired more than 150 industry professionals and is seeking partnerships with eSports companies and their tournaments. GameCredits has become the official partner for two Bulgaria based gaming tournaments named ESL Southeast Europe Championship and ESL Play Zone, which are the center of attraction in a bigger Onfest event, characterized by cosplay, street art display, live music, gaming tournaments and huge media coverage. The event took place in between June 24th and June 25th 2017 in which over 5,000 Euro cash prizes were awarded to the winning CSGO and League of Legends teams.

GameCredit is expanding faster and hence gaining a lot of interested investors on-board who anticipate huge rewards in the future. To know more about MobileGo tokens, check this link https://mobilego.io/

Tags: GamecreditsgceMobileGo
TweetShare
BitStarz Player Lands $2,459,124 Record Win! Could you be next big winner? Win up to $1,000,000 in One Spin at CryptoSlots