Apptrade Offers a Platform for Investors and App Developers 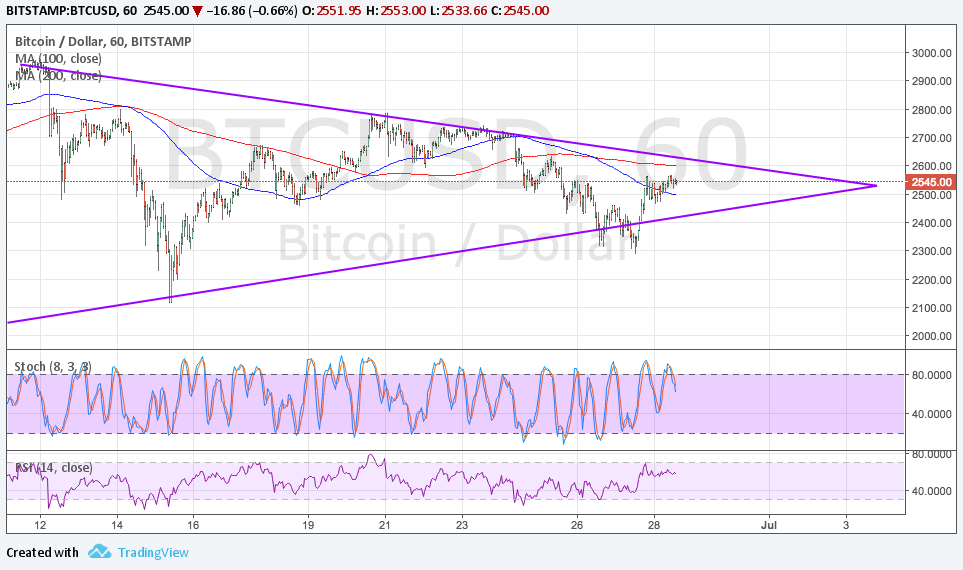 Bitcoin price has been mostly consolidating due to the lack of major market catalysts so far.

The 100 SMA is below the longer-term 200 SMA so the path of least resistance is to the downside. The 200 SMA is close to the triangle resistance, adding to its strength as a ceiling. If it holds, another move to support at the $2500 area could take place.

Stochastic is indicating overbought conditions and is turning lower to reflect a return in bearish pressure. RSI is also pointing down to signal that sellers are in control of bitcoin price action. In that case, a downside break of support could be in the cards, taking the price down to around $800 or the same height as the chart pattern. Bitcoin price has been taking advantage of dollar weakness recently as economic data has been coming in below expectations. Apart from that, some degree of profit-taking is starting to kick in leading up to the end of the week, month, and quarter.

The cryptocurrency is also shrugging off negative updates from earlier in the month when investor Mark Cuban warned that bitcoin could be a bubble and a Goldman Sachs analyst also gave a bearish analysis. It should also be noted that a couple of bitcoin exchanges suffered outages due to high levels of traffic and trading activity then.

Also, herd mentality tends to influence most of bitcoin and cryptocurrency movements as a lot of it is based on speculation and demand. It could require another strong positive catalyst to yield sustained rallies again.

With that, there is still some potential downside for bitcoin price, especially since risk appetite has been returning to financial markets. Stocks and commodities appear prime for a bounce while uncertainties subside, but of course, there’s still a chance that geopolitical risks could shore up alternative assets like bitcoin once more in the latter half of the year.