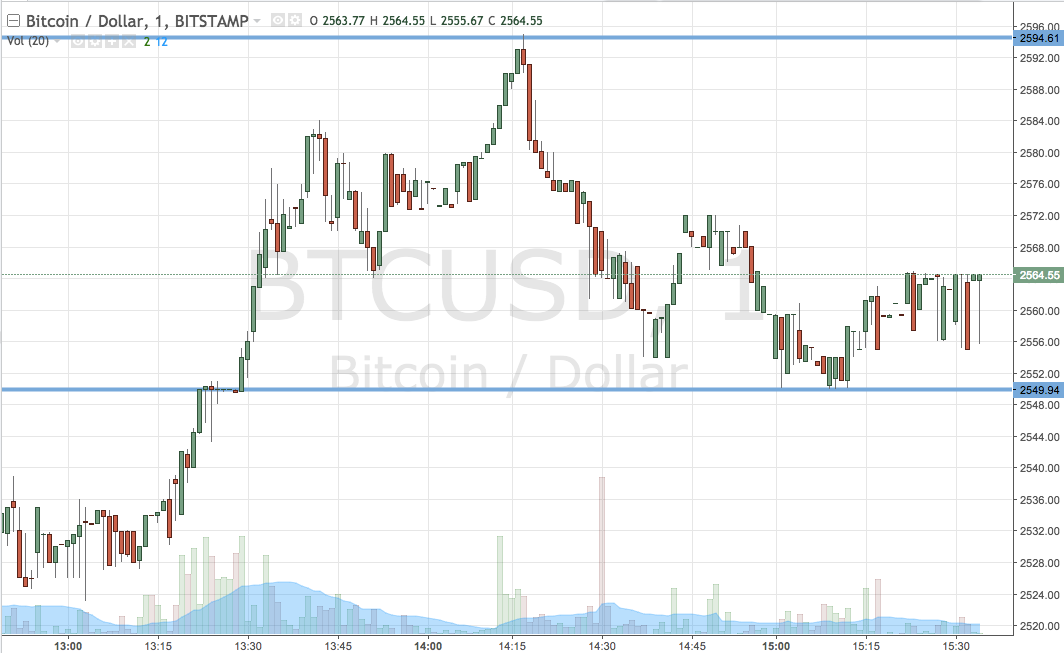 Ok then – that’s another day done in our bitcoin price trading efforts and one that has gone pretty much exactly as we’d hoped it would. For readers that caught our analysis this morning, we were looking for a little bit of upside momentum throughout the early morning session to set the tone for the day. The idea was that any breakout would capture the attention of the markets and – in turn – help to sort of compound itself. To put this another way, if price started to look like it was moving upwards and appreciating in value, it would more than likely become a self-fulfilling prophecy. On the back of a little bit of weakness over the weekend, this is what we wanted to see and – as noted above, it’s what we got.

The Bitcoin price reached intraday highs just shy of 2600 earlier on in the day before correcting a little bit towards the 2550 mark. The latter noted dip was the bottoming out of the correction, however, and the price has since resumed its upside momentum to trade at current levels in and around 2570.

With all this noted, then, here’s where we are looking next and what we intend to do as and when price moves tonight. As ever, take a quick look at the chart below to get an idea of what’s on and where we are looking to get I and out of the markets according to the rules of our intraday strategy. As the chart shows, the range we are looking at tonight comes in at support to the downside at 2549 and resistance to the upside at 2594. We are going to get in long on a close above resistance towards a target of 2630 and short on a close below support towards 2510. We’ll have ‘stops’ in place as ever to define risk on both positions.