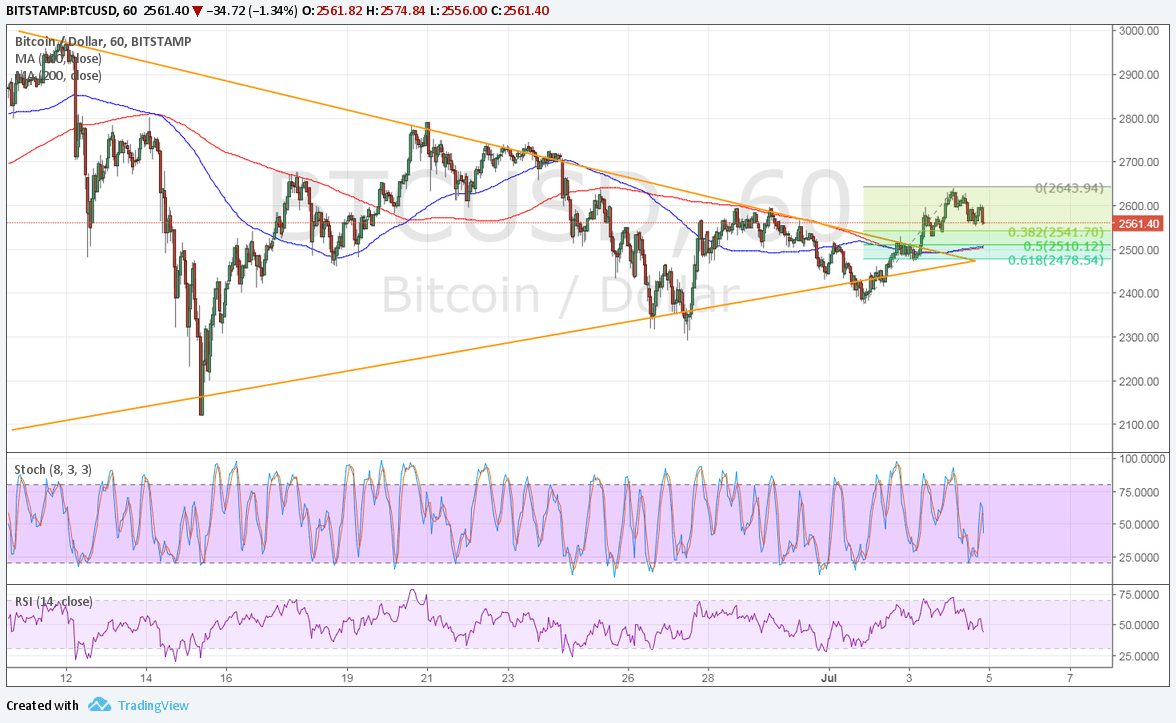 Bitcoin price is in the middle of a correction from its upside breakout move, providing a chance for more Bulls to join in.

The moving averages are still moving close together, with the 100 SMA attempting to seal the deal on an upward crossover. If this materializes, more bullish momentum could kick in and take bitcoin price back up to the swing high and beyond.

These dynamic inflection points are in line with the 50% Fibonacci retracement level just slightly above the $2500 major psychological level. A larger pullback could last until the 61.8% Fib near the triangle support, and a break below this area could signal that bears are putting up a fight.

The chart pattern spans $2100 to around $2900 so the resulting rally could be of the same size, taking bitcoin price well beyond its all-time highs near $3000. Goldman Sachs analyst Sheba Jafari did mention that the cryptocurrency is on its fifth wave of gains, possibly taking it up to the $3615 level next. Stochastic is pointing up to signal that buyers are in control of bitcoin price action for now, but RSI is turning lower to suggest that profit-taking off the recent rally is happening. If the bearish pressure stays in play, a move below the triangle support around $2450 could mean that the upside break was a fake out.

The return in geopolitical risk from the North Korean missile launch tests could support bitcoin price once more as it did earlier this year. At that time, though, there were a number of other uncertainties in play and the risk environment seems a bit different now.

Dollar price action could also hinge on the upcoming FOMC minutes and the NFP release, both of which could have more clues on when the Fed is likely to start unwinding its balance sheet.