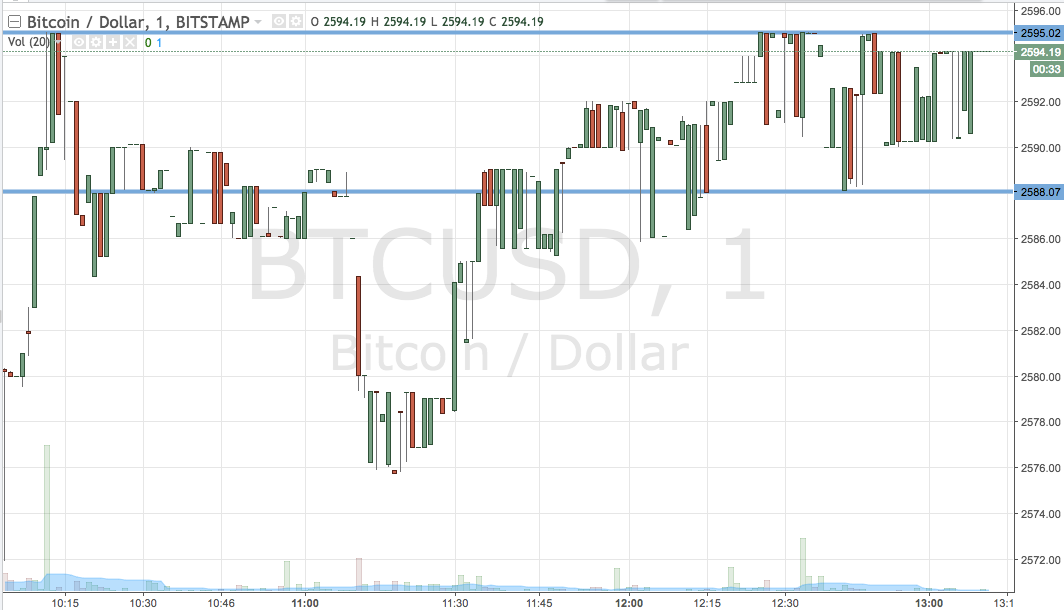 So that’s another day done out of Europe for our bitcoin price trading efforts and the end of the week is creeping up on us pretty fast. We noted this morning that the action we had seen over the last few days was pretty volatile (despite a dip in volume rooted in the holiday period in the US) and that – on the back of this volatility – we were able to jump in and out of the markets pretty cleanly on a number of occasions.

As it turns out, we’ve seen a continuation of this sort of action today.

Price started out with a bit of a flash crash first thing, but the crash recovered pretty much straight away and looks as though it’s not going to affect sentiment too much going forward. With any luck, we will see a continuation of this sort of bullish sentiment (and corresponding upside action) throughout the US session this afternoon and – beyond that – into the Asian session early Friday morning.

As ever, we’re going to set up on either side of the market just in case we don’t get the exact type of action we are hoping for. This means we should be able to profit from movement in either direction and removes a degree of risk from the equation as far as our operations over the next ten to twelve hours are concerned.

So, take a quick look at the chart below to get an idea of what’s on before we get our key levels in place.

As the chart shows, the range we’re using this evening is defined by support to the downside at 2588 and resistance to the upside at 2598. This is far tighter than our normal range, so we’ve got to keep our stops tight as well.

If we see a close above resistance, we’ll be in long towards an upside target of 2620. Conversely, a close below support will have us in short towards 2550.