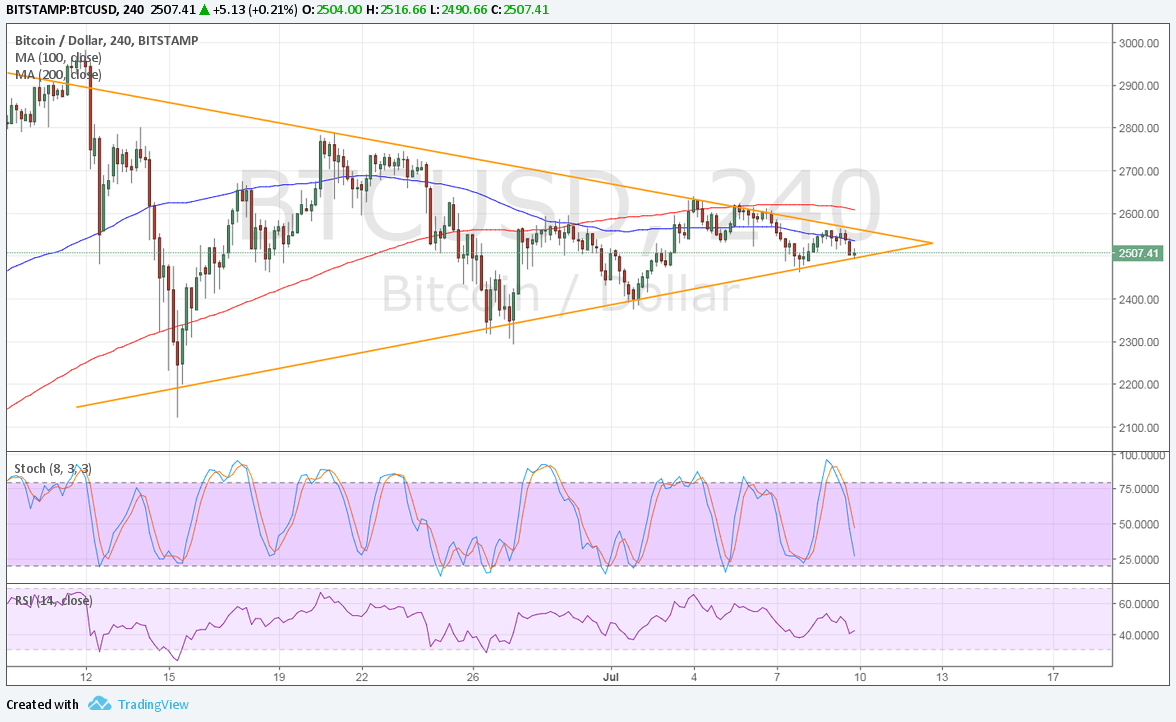 Bitcoin price is moving closer to the peak of its triangle pattern, so traders are on the lookout for a big breakout.

The 100 SMA is below the longer-term 200 SMA so the path of least resistance is to the downside. In addition, bitcoin price bounced off the 100 SMA dynamic inflection point, which might continue to hold as resistance. A move higher could still hit the ceiling at the 200 SMA dynamic resistance.

Stochastic is heading down so bitcoin price might follow suit. RSI is also moving lower to indicate that sellers are in control for now. Once both oscillators hit oversold levels and turn higher, bullish momentum could return and trigger an upside break.

A move past the $2600 level could be enough to confirm an upside breakout while a candle closing below the $2500 level could indicate a downside break. The chart pattern spans $2100 to $2900 so the resulting rally or selloff could last by $800. Bitcoin bulls got a boost earlier last week when Goldman Sachs analyst Sheba Jafari acknowledged that the cryptocurrency is in its fifth wave of gains, possibly taking it up to new highs around $3615. However, the dollar was able to put up a fight against the digital asset later on.

The NFP report came in stronger than expected at 222K versus the projected 175K gain for June while the May reading was upgraded from 138K to 152K. However, the unemployment rate ticked higher from 4.3% to 4.4% while the average hourly earnings printed a meager 0.2% uptick instead of the estimated 0.3% increase.

Even so, the dollar was able to recoup losses versus bitcoin price on renewed September hike expectations while the cryptocurrency awaits stronger market catalysts.