Bitcoin Price Watch; Here Are Two Trades For This Evening 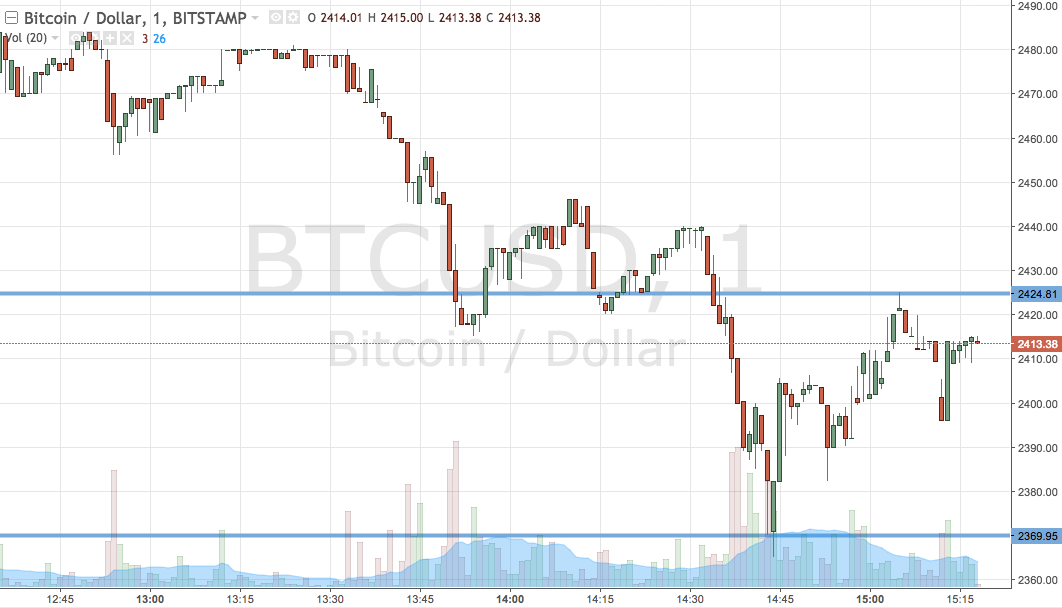 So that’s Monday out of the way and action in the bitcoin price has made for a pretty volatile session throughout Europe today. We suggested in this morning’s analysis that we might see some up and down action based on the fact that action over the weekend was similarly volatile and that said volatility would likely carry through into the start of play this week. While we got what we expected to a degree, price hasn’t moved in the direction we had hoped it might, with bitcoin currently trading in and around the 2400 mark – a good couple of hundred dollars cheaper than we were looking at the end of last week. This doesn’t mean we won’t see a near-term recovery, but it does lend itself to a nearer term bearish bias as things stand.

So, as we move into the US afternoon and beyond into this evening’s session, here is a look at what we are focusing on in the bitcoin price and where we intend to get in and out of the markets according to the rules of our strategy. As ever, take a quick look at the chart below before we get started to get an idea of where things stand. It is a one-minute candlestick chart and it has our key range overlaid invalid. As the chart shows, we are looking at a relatively wide range this evening, as defined by support to the downside at 2369 and resistance to the upside at 2424. If we see price break above resistance, we are going to look at getting in long towards an immediate upside target of 2450. That’s the more optimistic of our two trades for tonight. Looking the other way, at what likely amounts to a more realistic trade, if we see price break below support, we will enter short towards a downside target of 2313. A stop loss on this one at 2370 works well.