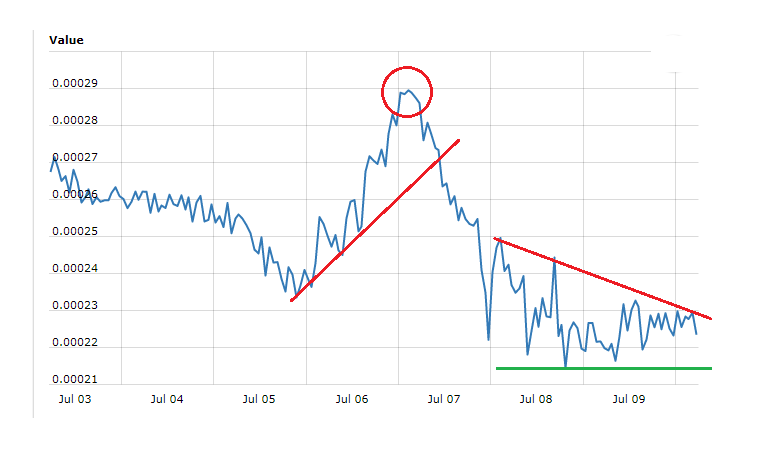 Creditbit price failed to overtake offers on the upside against the US Dollar and Bitcoin, and CRB/BTC is now back trading near the 0.00022BTC support.

In the last analysis, we saw a rise above 0.00025BTC in Creditbit price against the Bitcoin. Later, the price traded towards the 0.00030BTC level where it faced a strong selling interest. The barrier was such that it ignited a downside move in CRB below 0.00028BTC. During the downside move, the price broke the 23.6% Fib retracement level of the last wave from the 0.00023BTC low to 0.00029BTC high. Also, there was a break below a bullish trend line with support at 0.00027BTC on the 7-day chart of CRB/BTC.

These breaks ignited a downside wave, as the price even broke the 61.8% Fib retracement level of the last wave from the 0.00023BTC low to 0.00029BTC high. The price is now trading around the most important support zone near 0.00022BTC. It attempted a recovery on a couple of occasions, but got blocked by a bearish trend line at 0.00023BTC. It seems like a recovery back above 0.00025BTC won’t be easy in the near term. Hourly MACD – The MACD for the CRBIT/BTC pair is moving in the bearish zone.

Hourly RSI – The RSI for the CRBIT/BTC pair is below the 50 level.