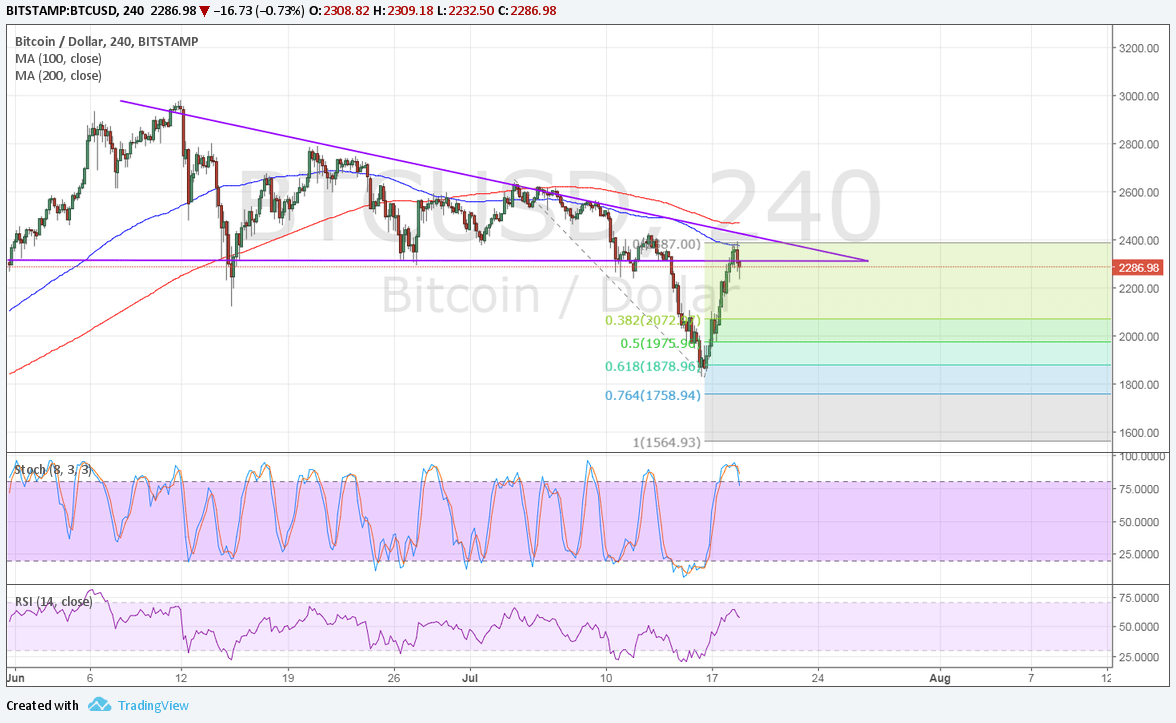 Bitcoin price might be done with its correction and the Fibonacci extension tool shows how low it could go from here.

The 100 SMA is below the longer-term 200 SMA to confirm that the path of least resistance is to the downside. At the same time, the 100 SMA lines up with the broken triangle support to add to its strength as resistance. The 200 SMA dynamic inflection point is closer to the triangle top, which might be the last line of defense in this downtrend pullback.

Stochastic is already indicating overbought conditions to reflect rally exhaustion, and the oscillator is turning lower to show an increase in bearish pressure. RSI hasn’t quite reached the overbought area yet but it is also starting to point down to signal that sellers are gaining the upper hand.

With that, Bitcoin price could set its sights on the following support levels: The US dollar has taken another beating on weaker prospects of fiscal reform from the Trump administration. Headlines are showing that Senate is unlikely to pass the Obamacare repeal as three Republicans have expressed opposition, along with the Democrat lawmakers.

This reminded investors that the US government might not be able to implement tax reform, which is a key component of their infrastructure spending proposals, within the year or early next year. This could also limit the Fed’s ability to hike interest rates as the economy could slow later on.

Meanwhile, bitcoin price has been able to benefit from the return in risk aversion in the markets on lower commodity prices and fresh catalysts. Also, miners are reporting progress in solving hard fork issues, shoring up confidence in the industry as well.

Tags: bitcoin pricebitcoin signalsbitcoin technical analysisbitcoin tradingbtcusd price
TweetShare2
BitStarz Player Lands $2,459,124 Record Win! Could you be next big winner? Win up to $1,000,000 in One Spin at CryptoSlots