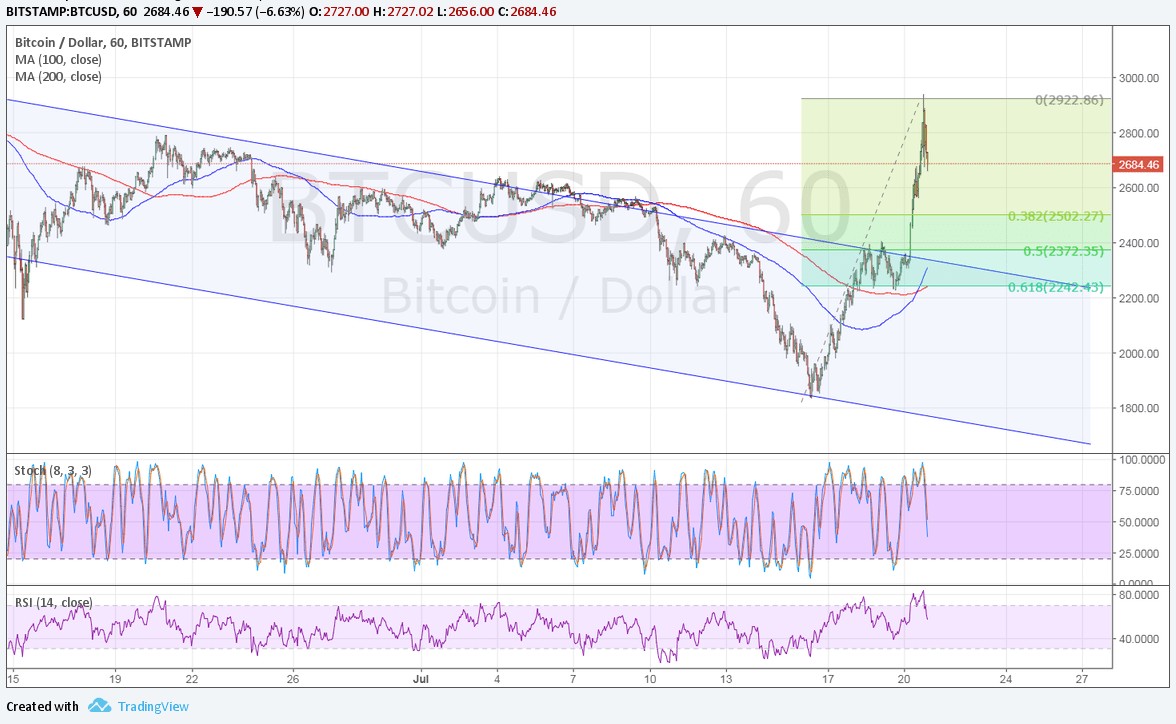 Bitcoin price made a strong rally to its record highs, and more bulls could be waiting to join on a pullback.

The 100 SMA just crossed above the longer-term 200 SMA so the path of least resistance is to the upside. Also, these moving averages are close to the broken channel resistance, adding to its strength as a floor in the event of a large selloff.

Speaking of this area of interest, the broken channel resistance is also in line with the 50% Fibonacci retracement level close to the $2400 handle in which several buy or sell orders are usually located.

Stochastic is turning lower from the overbought region, though, which means that profit-taking could happen while buyers take a break. RSI is also heading south so bitcoin price might follow from here. Once both oscillators hit oversold levels and turn higher, buying pressure could return and take bitcoin to its swing high and beyond. Dollar weakness has been in play for the past few days as the Trump administration continues to face several challenges. For one, the failure to pass the Obamacare repeal in Senate has reminded market watchers of likely delays in tax reform and infrastructure spending. More recently, former FBI head Mueller who is heading the special council looking into Trump’s Russian dealings has mentioned that they will be looking into the President’s previous business transactions with them.

As for bitcoin price, news on BIP 91 being locked in has eased concerns about several hard fork issues. This is in line with the larger effort to upgrade bitcoin to SegWit2x, which could basically handle more transactions through the network while avoiding incompatibility problems. Of course this is just the first step in the process and traders are now turning their attention to the grace period which lasts for nearly a year.