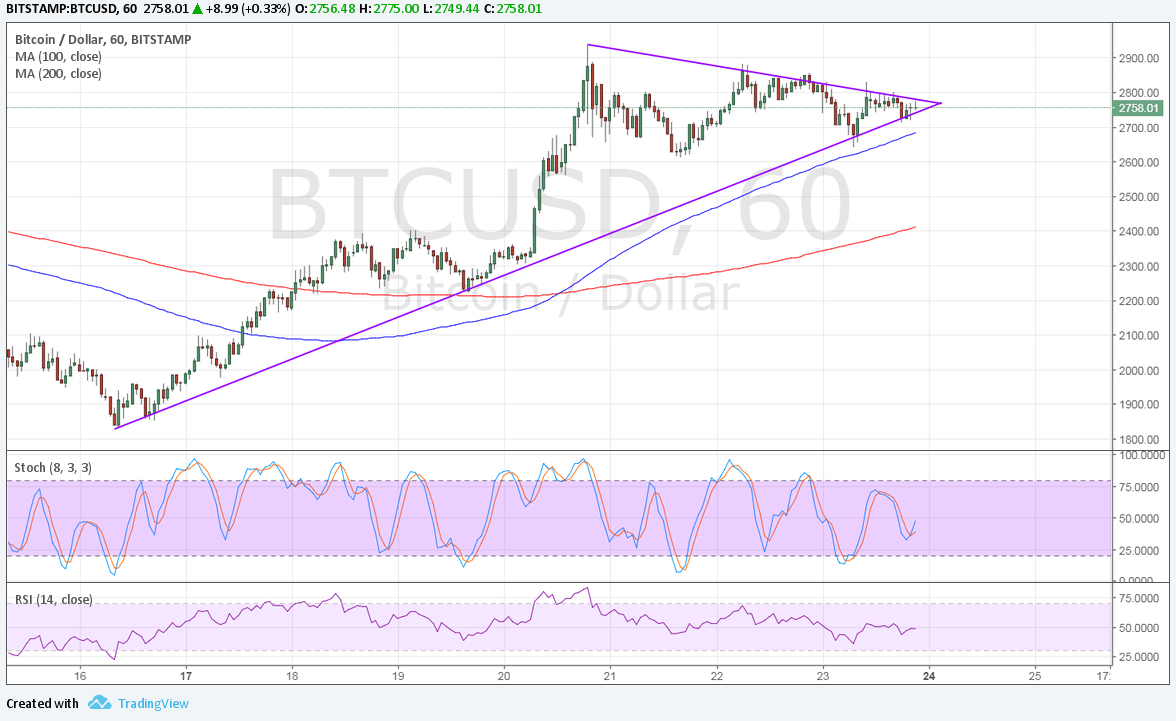 Bitcoin price is trading sideways for the time being as buyers are gathering more energy to push for a continuation of the rally.

The 100 SMA is above the longer-term 200 SMA so the path of least resistance is to the upside. In other words, the uptrend is more likely to carry on than to reverse. In addition, the 100 SMA is close to the rising trend line support, adding to its strength as a floor.

A break below the trend line around 2700 could lead to a larger pullback to the 200 SMA dynamic inflection point. This lines up with an area of interest at the 2400 level. A break below this region could signal that stronger selling pressure is in play.

Stochastic seems to be turning higher but is still on the middle ground, so it could be anybody’s game at this point. RSI is also cruising sideways to signal further consolidation. However, the price is already at the peak of its triangle formation so a breakout is bound to happen anytime soon. The FOMC statement could be the main event risk this week as traders are keen to find out when the balance sheet unwinding could start. If policymakers confirm that they would begin the runoff in the coming months, speculations of another interest rate hike in September could weaken, which would be bullish for Bitcoin price.

On the other hand, if the Fed reiterates its hawkish stance and maintains that the runoff would have nothing to do with their tightening time line, the dollar could hold on to its gains and go for more.

As for Bitcoin, the cryptocurrency managed to skirt hard fork issues after the upgrade was recently locked in. BIP 91, which is supported by around 80% of the network, marks the start of a larger move to upgrade to SegWit2x.