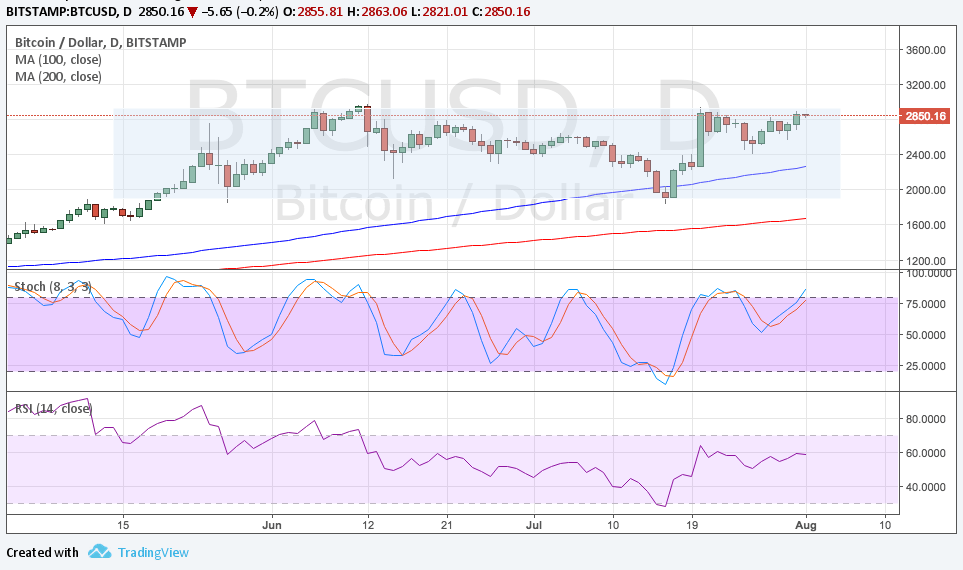 Bitcoin price is testing a major inflection point as the cryptocurrency waits to find out if it will face a hard fork or not.

The 100 SMA is above the longer-term 200 SMA to signal that the path of least resistance is to the upside. This short-term MA is also around the middle of the range, adding an extra layer of support in the event of a dip to the $2300-2400 levels. The 200 SMA is closer to the bottom of the range and might be the line in the sand for the ongoing climb.

Stochastic is still pointing up to signal that there’s some bullish pressure left. RSI is also on the move up but is starting to tread sideways to reflect more consolidation. Both oscillators are near overbought levels, though, so bullish momentum could weaken soon. If they do turn lower, selling pressure could return and spur a selloff. The magnitude of potential moves hinges mostly on the bitcoin hard fork scenario as industry players are all waiting to see if the cryptocurrency will have to be split into different versions or not. In this case, incompatibility issues may arise even as the network is able to accommodate more transactions.

On the other hand, a smooth transition to the SegWit2x upgrade with strong consensus acceptance could erase hard fork concerns and trigger more gains for bitcoin price.

Keep in mind that the dollar is also under some selling pressure due to the chaos in the White House and concerns about North Korea’s nuclear missile tests. President Trump has just fired his communications director again after appointing a new chief of staff. Intelligence officials have noted that Pyongyang can be capable of hitting most of the US based on the latest launch results.