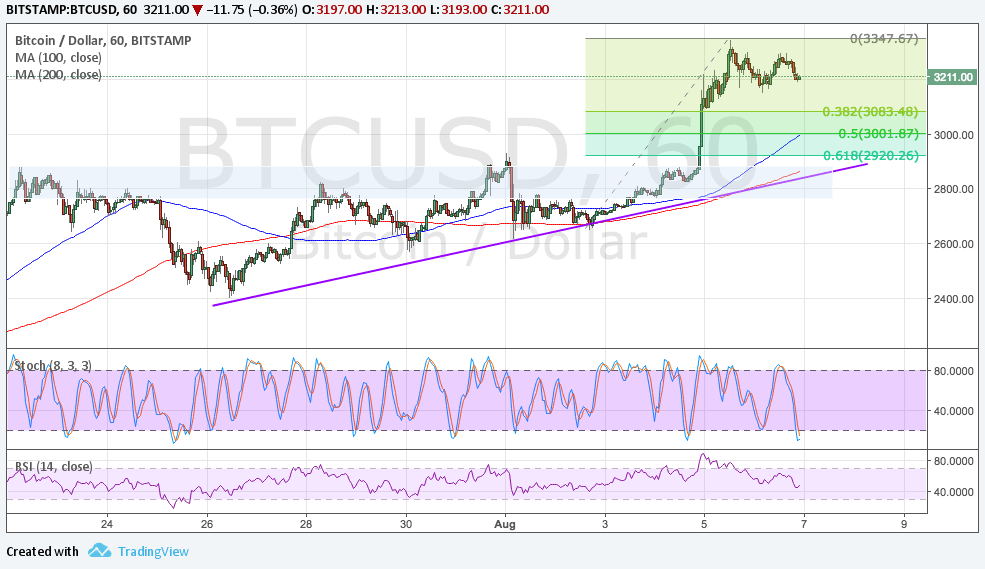 Bitcoin price surged to new all-time highs and might be due for a correction before heading further north.

The 100 SMA is above the long-term 200 SMA so the path of least resistance is to the upside. Also, the gap between the moving averages is widening to reflect stronger bullish momentum. The 200 SMA lines up with the rising trend line connecting the recent lows of Bitcoin price action and the area of interest at the former resistance.

The 100 SMA dynamic support lines up with the 50% Fibonacci retracement level at the $3000 major psychological level at which several buy orders are likely located. A shallow pullback could find support at the 38.2% Fib before bouncing back to the latest highs and beyond.

Stochastic is on the move down to signal that sellers are regaining control of Bitcoin price action. RSI is also turning lower so Bitcoin might follow suit. Once both oscillators hit oversold levels and turn higher, buying pressure could return and allow the uptrend to resume. Although Bitcoin split into two versions of the cryptocurrency, the lack of incompatibility issues for the past few days has allowed it to regain ground after a bit of uncertainty.

However, dollar demand has also picked up on Friday after the release of the NFP report as the economy added more jobs than expected in July. This kept September rate hike expectations in play, along with speculations that the central bank could start its balance sheet run off later this year.

Looking ahead, traders could stay on the lookout for any industry news related to the Bitcoin hardfork. Note that the upgrade of the main version to SegWit2x has still allowed the network to handle more transactions than before, even with Bitcoin Cash also being accepted by some exchanges.