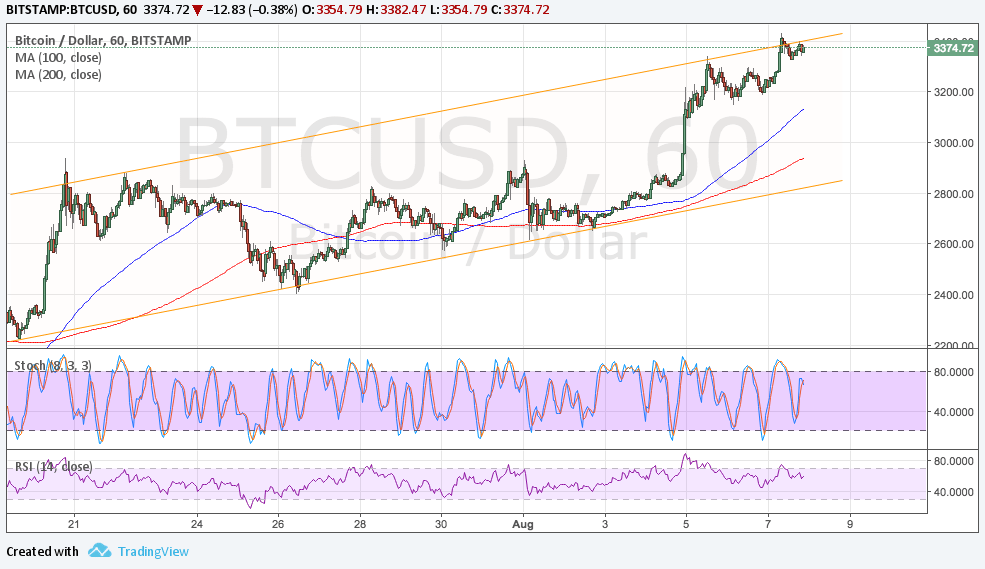 Bitcoin price is testing the resistance at the top of its ascending channel and might be due for a drop before resuming the rally.

The 100 SMA is above the longer-term 200 SMA, confirming that the path of least resistance is still to the upside. The gap between the two moving averages is widening to reflect stronger bullish pressure. Stochastic is also pointing higher to indicate that buyers are in control of bitcoin price action.

However, RSI is heading lower so bitcoin price might follow suit. In addition, bitcoin formed higher highs while this oscillator showed lower highs, reflecting a bearish divergence that might draw some sellers in.

A dip to the mid-channel area of interest around the $3100 mark could happen before bitcoin resumes the rally. This is close to the 100 SMA dynamic support level. Once both oscillators indicate oversold conditions and turn higher, more bulls could join in the game. The cryptocurrency enjoyed strong support on the lack of negative industry updates following the hard fork at the start of August. Two different versions of the software are in existence, with the newer version being accepted by only a few exchanges so there have been no incompatibility concerns just yet. Either way, the upgrade has paved the way for the network to handle more transactions than before.

Meanwhile, the dollar is consolidating against its peers as traders wait for the next big catalyst. A couple of Fed officials have urged starting the balance sheet runoff soon but investors seem more interested in rate hike odds. US CPI is due on Friday and a strong read could boost the dollar if it revives September tightening expectations.