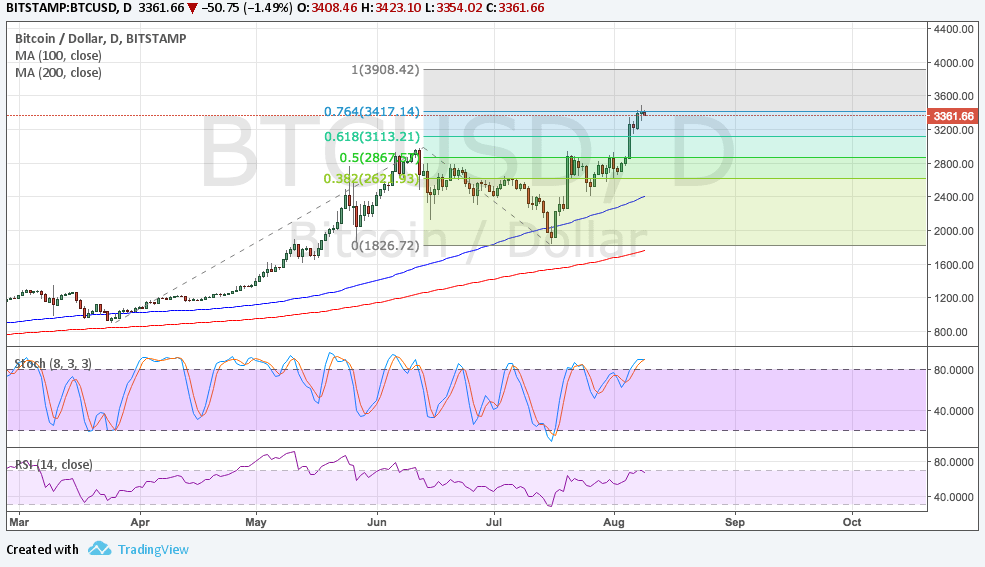 Bitcoin price is testing a major resistance level and it remains to be seen whether bulls have enough energy to push for new highs or not.

The 100 SMA is above the longer-term 200 SMA so the path of least resistance is to the upside. In addition, the gap between the two moving averages is widening to reflect stronger buying momentum.

However, stochastic on the daily time frame is already indicating overbought conditions so profit-taking could be due. RSI also looks ready to head south, which signals that buyers need to take a break and let sellers take over from here. It has been nearly a week since bitcoin has completed the hard fork without any major issues popping up. This is positive for the cryptocurrency even against its other digital asset rivals since the network is able to handle more transactions than usual.

Also, geopolitical risk is back in the spotlight since North Korea has threatened to launch a missile strike on the nearby U.S. Pacific territory of Guam. Trump has mentioned that this will be met with “fire and fury” so traders must be looking to move their stock and commodity holdings out.

Then again, the dollar remains supported against most of its peers since it does serve as a safe-haven after all. Besides, medium-tier reports are hinting at a strong pickup in hiring and spending in the coming months, supporting the idea of a Fed rate hike in September.