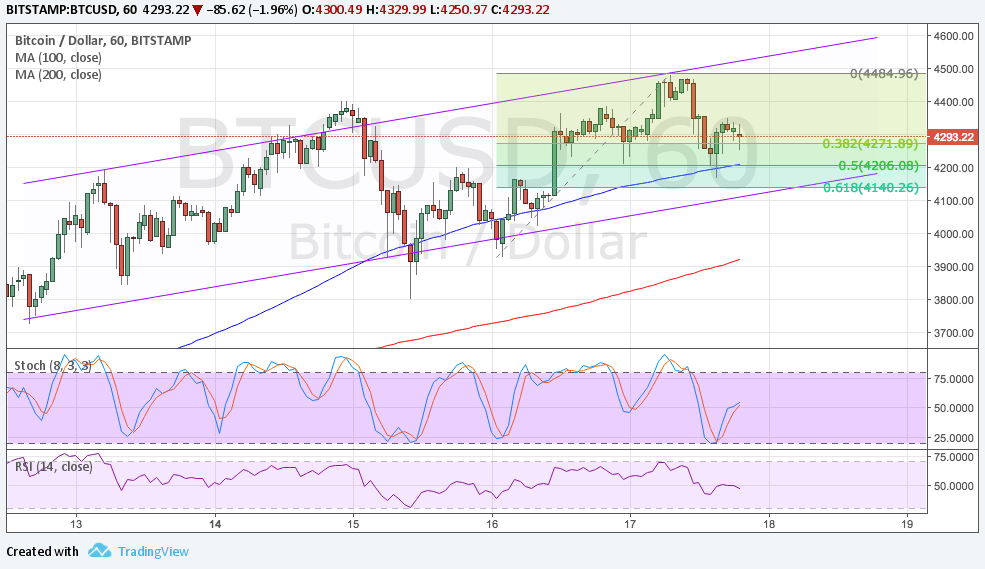 Bitcoin price appears to be making a much-needed pullback to the ascending channel support and Fib levels.

The 100 SMA is above the longer-term 200 SMA so the path of least resistance is to the upside. The gap also appears to be getting wider to reflect strengthening bullish momentum. The 100 SMA already seems to be holding as dynamic support as bitcoin price bounced off of it and could be headed back to the swing high just below the $4500 level.

A larger correction, however, could last until the 200 SMA which might be the line in the sand for the ongoing uptrend. Stochastic is already pulling up to indicate a return in buying pressure but RSI has room to head lower so bitcoin price might follow suit.

A break below the 200 SMA dynamic inflection point around the area of interest at $4000 could mark the start of a longer-term selloff. There are plenty of factors supporting more bitcoin price rallies at the moment, including the drop in risk appetite after the terror attack in Barcelona and the political risk stemming from the US government. After Trump disbanded his business council advising him on policy, there have been talks that senior officials are looking to resign, weighing on fiscal policy reform hopes.

Apart from that, the FOMC minutes have been very dollar bearish since policymakers refrained from committing to a timeline on the balance sheet runoff. There have also been inflation concerns voiced out, so the September hike isn’t set in stone yet.

As for bitcoin itself, the lack of negative news following the hard fork and network upgrade has allowed the cryptocurrency to hold on to its gains and go for more.