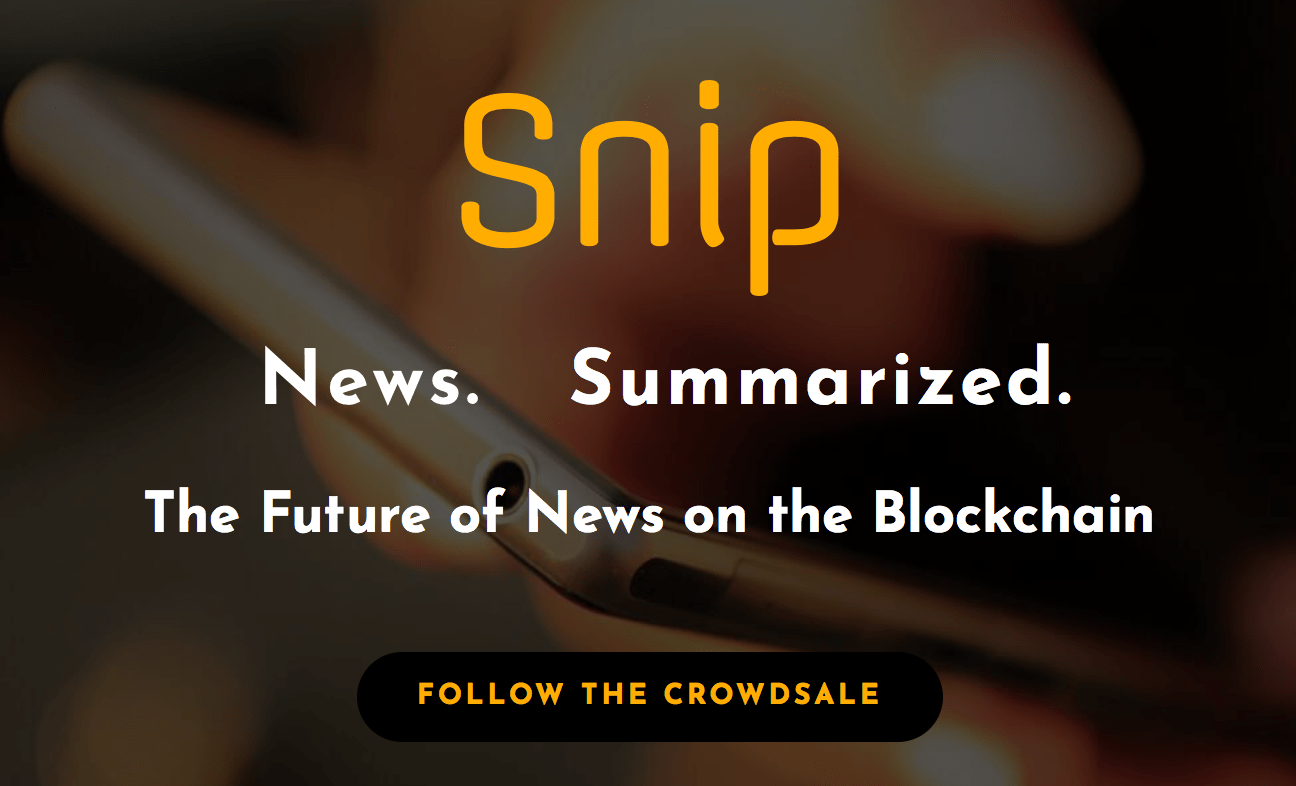 Snip announced this week that it will be launching a crowdsale to raise funds for the development of its decentralized, user-generated news platform.

The blockchain startup in its press statement confirmed that the public sale of its institutionalized token, SnipCoin (SNP), will be held on September 29th, 2017. In the entire lifetime, the total supply of SnipCoin is limited to 10 billion SNP. But for the upcoming token sale, only 3 billion will be made available, with an aim to raise a minimum of $8 million.

What is SNP token?

In detail, SNP is an Ethereum-based ERC20 standard token which will be used to conduct in-house finance operations of the Snip platform. Snip proposes to build a decentralized, censorship-free platform for online readers and contributors. The community-driven platform will allow users to publish their stories and, in return, will provide them with monetary rewards. At the same time, Snip will also allow businesses to use SNP tokens during the purchase of advertising products on the Snip news network.

SNP is launched with an inherent demand structure. As Snip news platform gains momentum due to its fear-free journalism, the demand for the SNP tokens will also grow. Coupled with revenue from subscriptions and ads, the total SNP pool size value could also increase exponentially, the benefit of which will directly be routed to SNP holders.

Also, SnipCoin is a public cryptocurrency and is not in control of the Snip team.

“News is broken”, says the very first statement of Snip whitepaper. It is sad but true. A small group of corporations is using news networks as a mean to manipulate public opinions. They promote clickbait and biased articles in large, while the actual journalists get sidelined despite delivering powerful and true stories of the society.

The advent of a platform like Snip becomes necessary in such times. Most because Snip is never controlled by a group of businessmen. It belongs to people, and is completely powered by its community — however small or large it may be.

“On Snip,” stated the whitepaper, “anyone can write a news story about any topic, and readers can find news that matters to them. A community-based news site, owned by the community, can become the top news site in the world and cover any subject, from breaking news to entertainment and everything in between.”

To know more about the technology behind the Snip platform, and why should you be a part of it, please visit here.