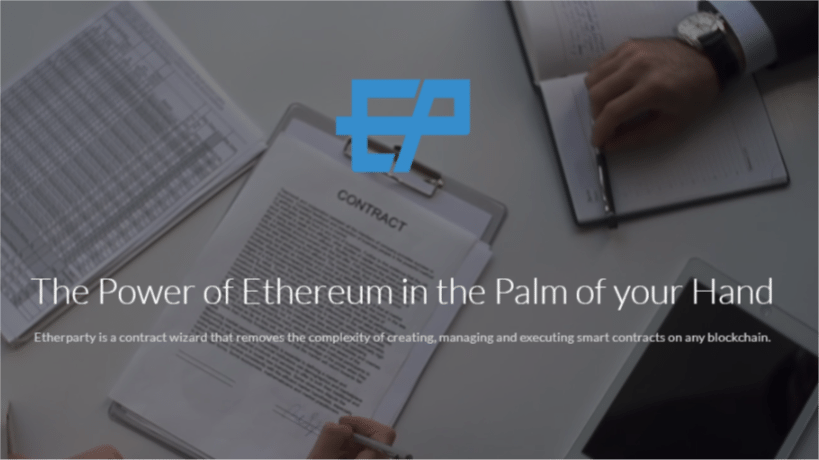 Etherparty is a new fintech-related startup that will soon launch its ICO (Initial Coin Offering). It aims at managing smart contracts in an easier and better way even in the case of a user without any knowledge of computer programming.

Users will have the chance to choose from a wide range of data-sources, oracles, and clauses from the platform where they can simply use the drag and drop tools to visually manage and construct custom contracts.

Etherparty conducts continuous security tests on all the smart contracts on the testnet before they are made available in the template library. This is possible thanks to security experts who fully audit Solidity language code of any custom contract so that are no surprises in store after they are launched on the mainnet.

Etherparty aims at being a fully managed solution that handles everything from creating digital agreements on the blockchain to security testing, launching and monitoring tools during the whole process, making it easier even for a user with no prior experience.

These are the potential applications, but they are just a small part of the possibilities allowed by Etherparty.

Etherparty is launching its ICO, starting from September 15th, 2017 at 10:00 PDT. Those interested in being part of the revolutionary platform can make use of this opportunity and participate in the crowdsale.

Currently, the team is working on a mobile app in alpha, enabling end-to-end contracts management based on the Ethereum blockchain.

FUEL is the name of the Etherparty-created ERC20 token that powers the platform. Etherparty has decided to hold an ICO in order to build a network of worldwide users who will use FUEL for many contract use cases: from gaming to supply chain, from peer-to-peer contracts to crowdfunding. And, of course, to do so, they need to kickstart the movement.

There are a lot of exciting things in store and in the coming days, Etherparty will emerge as the DIY smart contracts and DApps platform for everyone irrespective of whether they are professional developers or not.

Tags: blockchainblockchain technologyethereumEtherpartyICOtools
TweetShare
BitStarz Player Lands $2,459,124 Record Win! Could you be next big winner? Win up to $1,000,000 in One Spin at CryptoSlots