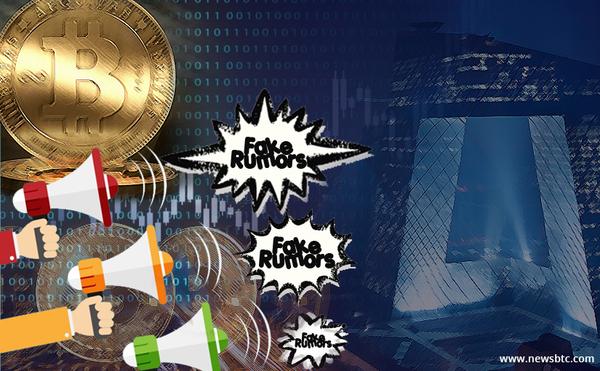 It has been a tough weekend for Bitcoin and all other cryptocurrencies. More specifically, unconfirmed sources claim the Chinese government wants to ban Bitcoin exchanges. Various Western news outlets have run this story as well despite not having a credible source for this information. It is highly unlikely such drastic measures will be taken, though. All Chinese exchanges recently underwent major KYC and AML upgrades, after all.

On paper, there is no reason for the Chinese government to ban exchanges whatsoever. All platforms adhere to PBoC regulation as we speak. A few months ago, all platforms had to undergo AML upgrades and everyone complied. There is no reason to think the government will undo that hard work less than six months later. It is true, they are cracking down on cryptocurrency ICOs and platforms trading said tokens, though.

Both Bloomberg and WSJ report identical stories on what the Chinese government has planned. While both are somewhat reputable outlets, it is unclear where they got their information from. No Chinese exchange has been ordered to shut down or limit its services as we speak. Moreover, there are plenty of theories as to why this news is distributed in such an orchestrated manner. Some community members speculate this is a massive price manipulation attempt to bring the Bitcoin value down. Even if that is true, it will be incredibly difficult to prove, that much is certain.

What is remarkable is how the Chinese government will allegedly still allow OTC Bitcoin trades. This dual-pronged approach makes no sense whatsoever. Exchanges adhere to PBoC regulation and share information with the bank willingly. OTC Service providers have no advantage over exchanges in this regard. Moreover, all Chinese exchanges collect plenty of user information, including ID scans and bank information. Clamping down on Bitcoin exchanges at this point makes no sense. That should have been done years ago, if it ever was a plan of action, to begin with.

It is certainly true China has a colorful history with Bitcoin so far. The PBoC initially issued warnings about cryptocurrency.Earlier this year, they got a change of heart and decided to regulate exchange activities. So much work has been done to build up a credible Bitcoin ecosystem in China. There is no possible reason to undo all of this work on a whim’s notice. With no exchanges receiving any official notice to wind down, this rumor is nothing more than just that. It is sad to see potentially fake news make mainstream media headlines.

Tags: bitcoinBitcoin NewsChinese Governmentexchangespboc
TweetShare
BitStarz Player Lands $2,459,124 Record Win! Could you be next big winner? Win up to $1,000,000 in One Spin at CryptoSlots