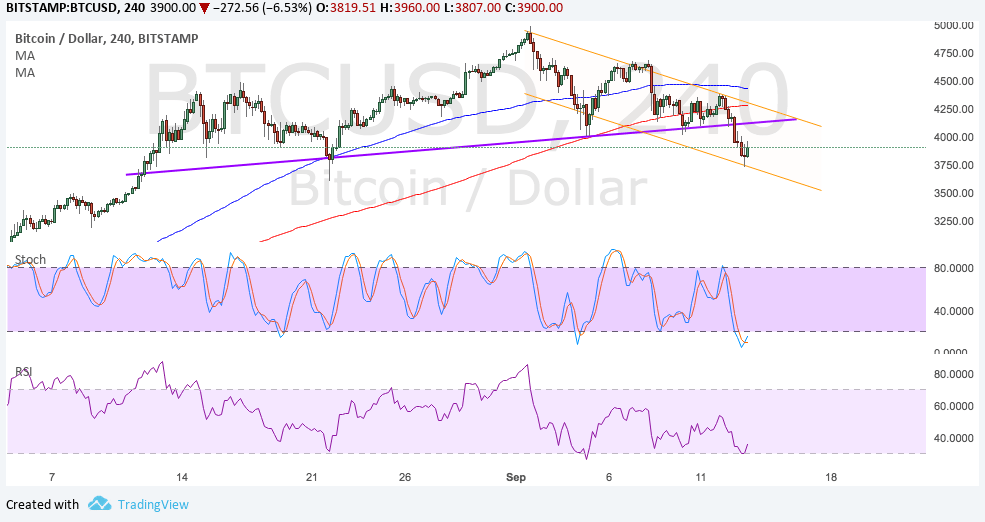 Bitcoin price confirmed its head and shoulders reversal signal but might still be due for a quick pullback to the broken neckline.

The 100 SMA is above the longer-term 200 SMA so the path of least resistance might still be to the upside. However, the gap has been narrowing to signal that a downward crossover is imminent, likely drawing more sellers in the mix.

For now, a pullback to the broken neckline support at $4200 seems possible. This lines up with the 200 SMA dynamic inflection point and the top of the descending channel.

Stochastic is indicating oversold conditions so sellers might take a break and let buyers take over from here. RSI hasn’t quite reached oversold levels yet but appears to be turning higher to signal a return in buying momentum. Dollar demand has kicked higher on renewed attention on tax reform by the Trump administration. The US President had a meeting with 13 lawmakers, 8 of which are Democrats, to discuss details and to show that political differences can be put aside to pursue reform that is pro-jobs, pro-families, and pro-American.

At the same time, expectations for an upbeat CPI release are increasing even after the PPI report disappointed. A rebound was seen for both headline and core readings but these were slightly lower than consensus. Still, leading indicators such as PMI surveys have reflected higher input costs that would’ve been likely passed on to consumers.

Meanwhile, bitcoin price appears to be reeling from JPMorgan CEO Jamie Dimon’s comments on how the cryptocurrency is a fraud and that the bubble is about to burst soon. Traders appear to be running out of reasons to prop up bitcoin price for now as rumors that China will shut down bitcoin exchanges continues to spook bulls.