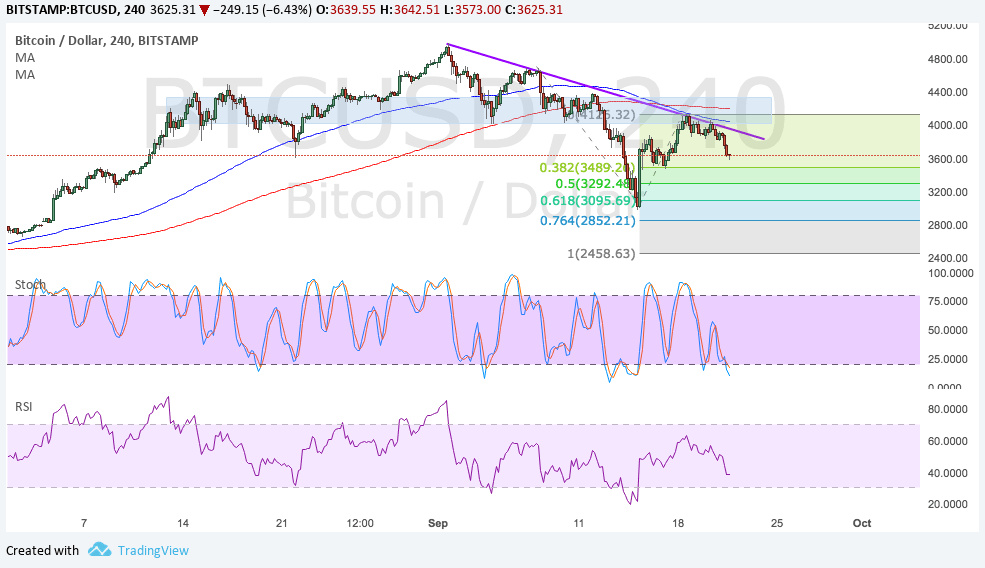 Bitcoin price bounced off the resistance of the descending trend line and area of interest, setting its sights on the next potential support levels.

The 100 SMA is below the longer-term 200 SMA on this time frame so the path of least resistance is to the downside. This means that the selloff is more likely to continue than to reverse. Also, the 100 SMA lines up with the trend line resistance, adding to its strength as a ceiling.

Stochastic is on the move down to confirm that bearish momentum is present, but the oscillator is also nearing oversold conditions so seller exhaustion could come around soon. RSI has more room to fall so bitcoin price might follow suit. Dollar demand has picked up following the FOMC decision, which revealed that the US central bank is maintaining its upbeat outlook and tightening bias even after the recent hurricanes took their toll on growth. The Fed also shared its plan to trim its balance sheet reinvestments by $10 million per month starting in October.

The latest batch of medium-tier reports came in stronger than expected, underscoring the idea that the Fed can be able to hike interest rates by December. Riskier assets like commodities are also giving up ground to the dollar, dragging bitcoin price along with it.

Then again, there’s always the prospect of renewed geopolitical risk waiting in the shadows as additional sanctions will reportedly imposed on North Korea and a response could be made over the weekend. Escalating tensions could still revive demand for digital gold or bitcoin.