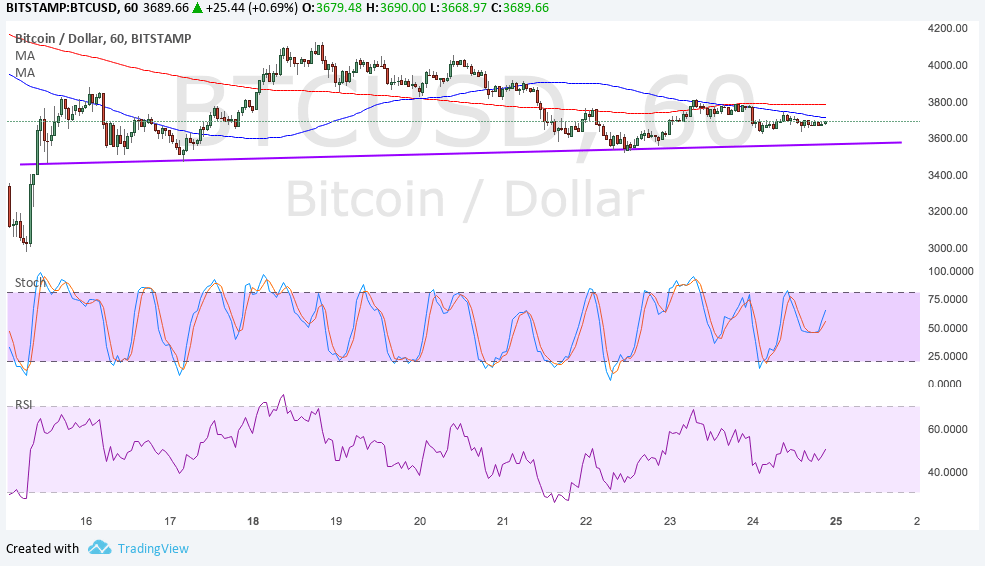 Bitcoin price is forming a head and shoulders reversal pattern on its short-term time frame, signaling that more losses are in the cards.

The 100 SMA is below the longer-term 200 SMA so the path of least resistance is to the downside. However, the moving averages are also oscillating to indicate that further consolidation is possible.

Stochastic seems to be headed higher to indicate that buyers still have enough energy left in them, but reaching overbought levels could draw sellers back in. RSI is also treading sideways to indicate consolidation action for now.

If the neckline support holds, a bounce back to the shoulders around $3800 or until the head at $4100 could be underway. A break lower could also bring bitcoin price down to the $3000 major psychological support. Dollar demand has been in play last week after the FOMC gave a relatively upbeat statement. Not only did they hint that a December interest rate hike is still on the table, but they also confirmed that balance sheet unwinding will proceed in October. Apart from that, the Fed upgraded this year’s growth forecast and assessed that the impact of the recent hurricanes is just temporary.

Looking ahead, traders are still waiting for the next big market catalyst to determine direction but it looks like the low volatility environment might be here to stay as the lower volumes in China are influencing activity. Bulls are hopeful that bitcoin exchanges in the country could still come up with a way to resume operations in a manner that is compliant with government regulation.

One potential factor that could prove bullish for bitcoin and other cryptocurrencies is resurfacing threats from North Korea as this could revive geopolitical risk and spur demand for digital gold.