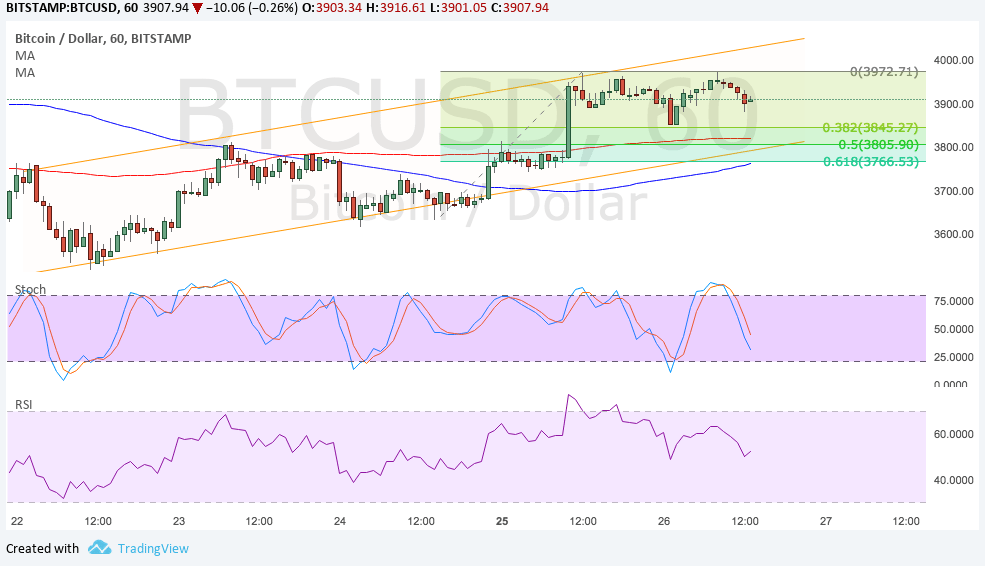 Bitcoin price is trading inside an ascending channel and a short-term pullback to support seems underway.

The 100 SMA is still below the longer-term 200 SMA so the path of least resistance is to the downside, which means that the selloff could carry on. However, the gap between the moving averages is narrowing to reflect slowing bearish pressure and a potential upside crossover.

Stochastic is also pointing down to signal that bearish pressure is still present, which means that the correction is still in play. RSI is also heading south so bitcoin price might follow suit until the oscillators hit oversold levels to reflect exhaustion among sellers. Demand for bitcoin or digital gold has gotten a boost as the war of words between North Korea and Trump has resumed earlier this week. For many, it’s only a matter of when or who fires the first shot. For now, though, there have been no new headlines on this matter so a bit of profit-taking from the earlier risk-off flows is happening.

As for the dollar, Fed Chairperson Yellen seemed to backpedal on the FOMC’s hawkish tone during this month’s statement as she admitted that they may have overestimated the tightness of the labor market and the potential for inflation to pick up. Nonetheless, she stressed the importance of modest tightening to prevent the economy from overheating.

Looking ahead, market sentiment could be the key driver of bitcoin price as traders continue to keep close tabs on the North Kore situation to assess whether or not another flight to safety is warranted.