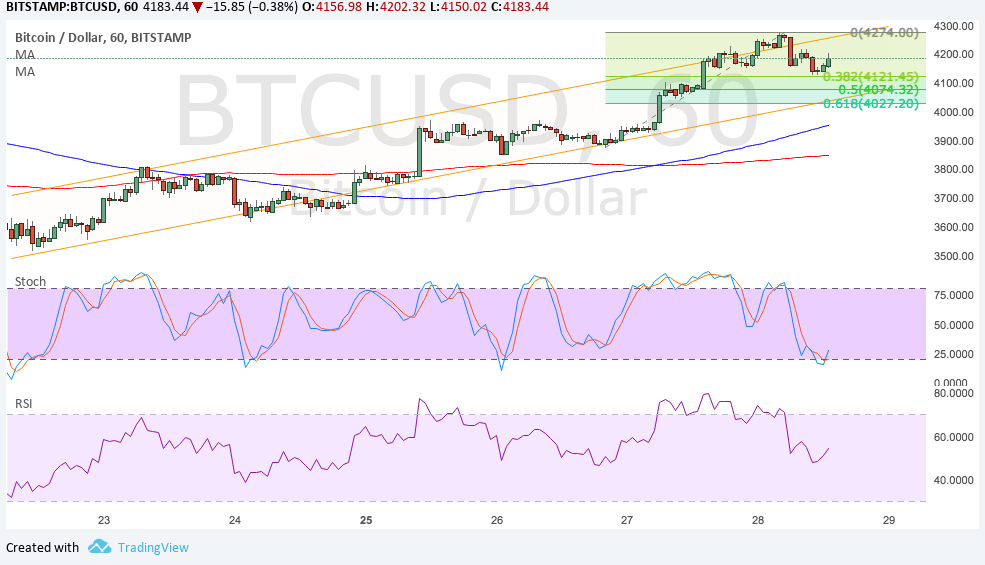 Bitcoin price is starting a new short-term uptrend on its 1-hour time frame and might offer an opportunity to go long on a pullback.

The 100 SMA is above the longer-term 200 SMA to show that the path of least resistance is to the upside. In other words, the uptrend is more likely to resume than to reverse.

The short-term MA is close to the channel support and might add to its strength as a floor as it moves higher. The line in the sand for the uptrend is the 200 SMA dynamic inflection point around $3800 for now.

Stochastic is already pulling up from the oversold region to signal selloff exhaustion and a potential return in buying pressure. RSI, on the other hand, has room to drop so the correction could stay in play until this oscillator hits oversold levels and turns higher. Profit-taking is expected to come into play now that it’s the end of the month and quarter. This could lead to big moves for bitcoin price before traders adjust their positions for the last stretch of the year.

The cryptocurrency got a boost from positive remarks by Morgan Stanley CEO Gorman who said that it’s more than a fad. This runs counter to remarks from JP Morgan CEO Dimon who said that it is in a bubble that might burst soon.

Meanwhile, the dollar is supported by Fed December hike expectations and the prospect of tax cuts from the Trump administration. Looking ahead, the attention could shift back to North Korea as the weekend approaches as geopolitical risk could lead to another strong rally in digital gold on escalating tensions.