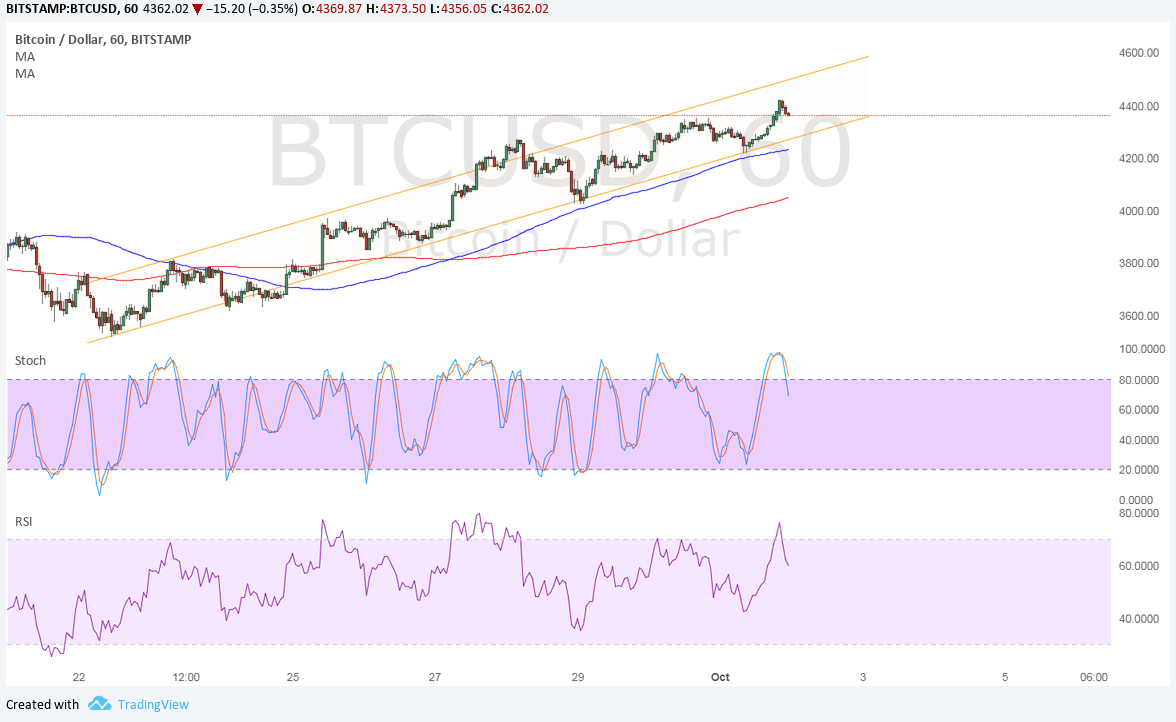 Next Article: An Interview with Robin Lee, the CEO of HelloGold

Bitcoin price continues to trend higher inside a bullish channel, despite the dip in volatility over the past weeks.

The 100 SMA is above the longer-term 200 SMA so the path of least resistance is to the upside. This means that the uptrend is more likely to continue than to reverse. In addition, the 100 SMA coincides with the channel support to add to its strength as a floor.

However, stochastic is turning lower from the overbought zone to signal that bearish momentum could kick in. This could lead to a test of support around 4300.00 or even a break lower. If the latter happens, bitcoin price could aim for the dynamic support at the 200 SMA next.

RSI is also pointing down to show that sellers could regain control of bitcoin price action. But if bitcoin bulls return, a test of the channel resistance around 4500 could be underway. The presence of risk aversion in the financial markets is enough to shore up bitcoin price even with the shutdown of exchanges in China or downbeat remarks from CEOs. There’s always the chance that North Korea could launch a missile strike and this has kept investors cautious of putting funds in riskier assets like stocks and commodities, choosing to hold on to digital gold instead.

Apart from that, the enthusiasm over the US tax reform proposal seems to have quickly faded on the lack of follow-through towards the end of the week. Traders are also paying close attention to the upcoming NFP report as Yellen previously mentioned that they may have overestimated the strength of the labor market.

Analysts are expecting to see a feeble 88K gain in hiring, around half the previous 156K gain and enough to signal slowing momentum in employment.