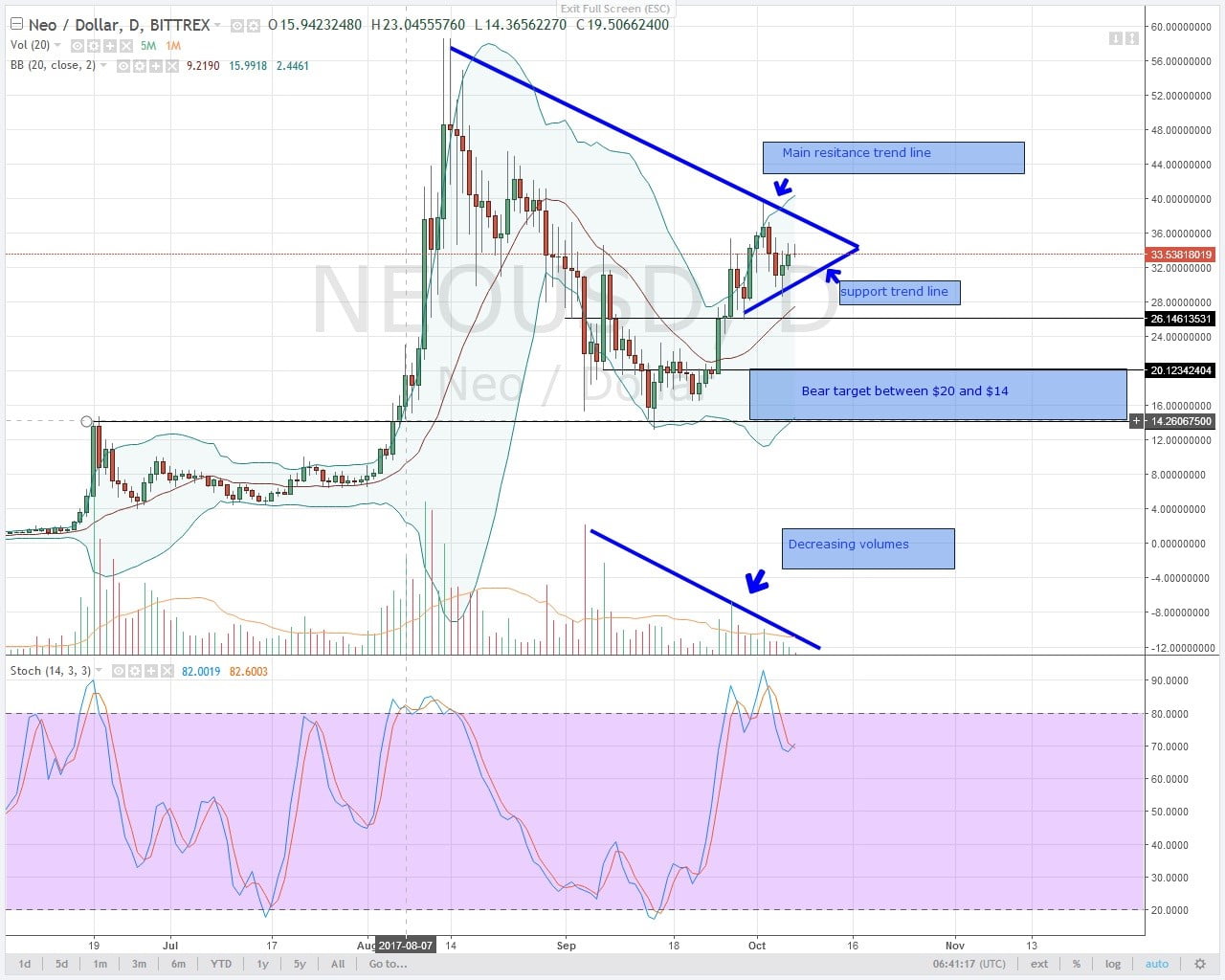 Even though there was a clear job reduction in September 2017, the USD managed to stay stable. Data shows that unemployment contracted while average hourly earnings surged by 0.5% last month. Earnings data is a metric used by the Feds and is a subtle inflation indicator. Therefore, any increase should be positive for the greenback. As evidenced, price action failed to break above $35 which was our bull trigger level and sellers actually took charge in the later stages. Check out the long upper wick on yesterday’s candlestick. I will set out new triggers defined by that wedge. As a bear, it is most likely that price action will gravitate lower and break out below support. Break out above $38 will invalidate our bear projection. Refer Figure 1(above): NEOUSD-Daily Chart-07.10.2017 After 04.10.2017, two things have been clear: The slow but steady DASH appreciation and the almost stable volumes. As noted, there is a stochastic buy signal and bulls are pumping prices up. Price action is bouncing off the lower BB as sellers and buyers try to cancel each other out. Because of this, resulting have been dojis. Our reasonable resistance line will be above 02.10.2017 highs of $325 and the 50 period MA. Of course, any bearish engulfing candlestick which breaks below the wedge means short entries. Overly, I remain a bear on this pair with ideal targets at $270 and $220. Because of a USD fundamental event yesterday, there was a little volume spike to $13M relative to 05.10.2017. Consequently, the minor support at $0.52 was broken by that strong bear candlestick.  After that retest on 04.10.2017, bears have been in charge and the 50 period MA is doing its job. Since stochastic bear pressure is still on, our initial targets remain in place. As flat as price action is, the 50 period MA and the resistance trend line are repulsing any attempted breakouts. For 5 trading days, price action has been consolidating below $95. With series of lower lows over 3 days, bears are slowly taking the lead. Furthermore, because of stochastics sell signal dropping from the overbought territory, we can assign a high probability of volatility to the downside with a view of the break below $87 and the support trend line. If it does, our stop loss should be above $95 with first and second take profit levels at $80 and $60 respectively. I was waiting for a break below support trend line yesterday and it did happen. Since bear momentum is high and a sell signal is still in place, I recommend a sell position as we take advantage of this breakout. First, take profit level is at $5 and then $4 before we expect buyers to jump in at that resistance turned support at June highs and September lows.

Read More
Tags:altcoinanalysiscryptocurrencyDashIOTAliskLSKmoneroneotradingXMR BitStarz Player Lands $2,459,124 Record Win! Could you be next big winner?
Next Post