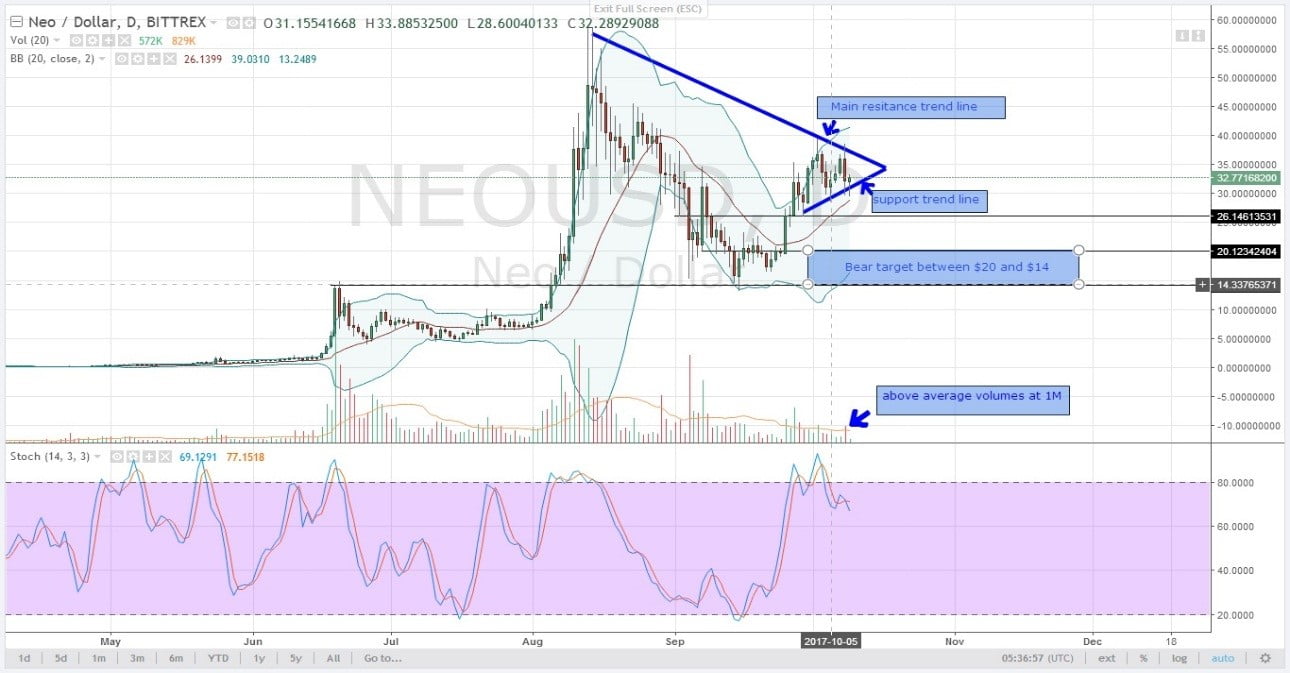 As yesterday’s candlestick closed, our minor resistance level at $35 had been broken with price action testing resistance trend line at $38. It tested that level before reversing lower. Price moved $9 forming a double bar reversal pattern or a bear engulfing pattern, whichever pattern you would prefer. Also notice that this pattern was accompanied by above average volumes which spiked to 1M. By forming this candlestick, a double top was confirmed following similar price action pattern on 02.10.2017 and 03.10.2017. For bears to be completely in charge, conservatives should wait for a break below support trend line at $29. Should it happen with strong volumes at or above daily average, then intraday traders can initiate shorts in lower time frames. Already, there is a stochastic sell signal which gives a hint that bear momentum is still high. Refer Figure 1(above): NEOUSD-Daily Chart-09.10.2017

So just like NEOUSD, there is a clear break below support trend line with increased bear volumes. Yesterday, 33K bears jumped in, that was 5K more orders on average over the last 3 or so trading days. You also note that stochastics turned lower following the break below support trend line. Today, bears should enter short especially if price action breach $286. Our targets remain unchanged at $270 and $220.

The 20 period MA is acting as a reliable resistance trend line and as price action consolidates between $0.55 and $0.50, our profit target remains unchanged. Overly, I anticipate sell momentum to continue over the next few trading days now that volumes are stabilizing. $0.50 remains our immediate support level and if broken, then aim for the lower range of that take profit zone at $0.36. Safe stop losses should be placed above $0.55, which is the 20 period MA.

So far, even though bear momentum is still high, price action is still within the BB squeeze and consolidating towards the apex of that wedge. Additionally, there is almost no movement as price action is oscillating a very narrow $2 which is contrary to the average $7 price change a day. In the last 4 days, there have been a series of lower low relative to the upper BB and a rebound from the 20 period MA which is now a flexible resistance. Any break above $94 and consequent close above resistance trend line will invalidate our bear projection especially if it is accompanied by strong bull volume. For now, sellers should aim for immediate support at $81 while keeping an eye at participation levels as shown by volumes.

Our 06.10.2017 break out was confirmed on 07.10.2017 and yesterday when those two bear soldiers were printed. First off, our minor support at $5 was blasted through yesterday as sellers jumped in. Note those high volumes-at 650K above the daily average of 500K. Secondly, the lower BB candlestick hugging. The latter is particularly indicative of high momentum and since the recent pattern is a classic breakout with a retest of support turned resistance trend line at $5.5, I expect more bear build up. Target support line at $4.0 and move stop loss to break even.

Tags: altcoinanalysiscryptocurencyDashIOTALSKneoXMR
TweetShare
BitStarz Player Lands $2,459,124 Record Win! Could you be next big winner? Win up to $1,000,000 in One Spin at CryptoSlots