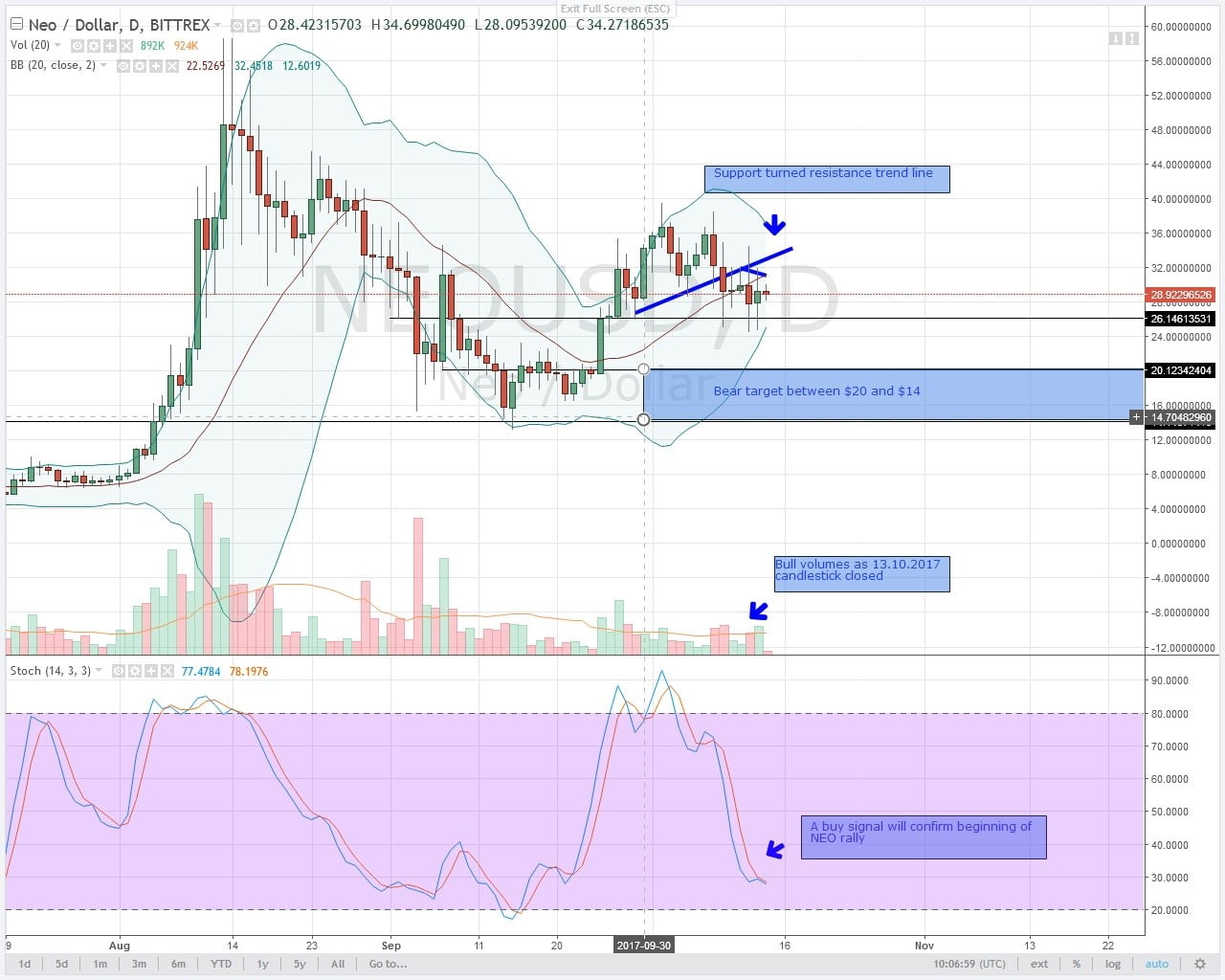 Next Article: Why Investing in Digital Currencies Is a Much Better Idea

12.10.2017 and 13.10.2017 lows of $26 will be our minor support level. Actually, a double bar reversal pattern was anchored there when yesterday’s candle closed. For now, any appreciation to gauge bullish presence will only be valid with prices closing above $33 and a stochastics buy signal in place. In the meantime, the 20 period moving average and support turned resistance is our ceiling and it looks likely to be broken in the short term. Refer Figure 1 (above): NEOUSD-Daily Chart-14.10.2017. The above average bullish volumes of 13.10.2017 drove prices higher confirming that 09.10.2017 was indeed a fake bear break out. Relative to price action characteristics, stochastics were turning from the oversold territory when price broke below support trend line and looked like bears were actually in charge after 09.10.2017. Since there is clear price rejection above $330, it’s safe to wait for a break above that region of resistance marked by the resistance trend line and the 20 period MA before going long. There is a high likelihood that 12.10.2017 break-out below $0.45 and support line will form a basis for a two-bar reversal pattern. Advised from yesterday’s developments, and failure of price action to trend lower, the previous bear projection is now invalid. Since price action is still trending within a tight $0.10 range, I will wait for a break above resistance trend line and fine-tune long entries in shorter time frames with perfect prices around support at $0.45. A safe stop loss will be below second support at $0.38 with an immediate bull target at $0.65. Our bear projection was invalidated on two levels. First off, that bullish engulfing pattern thrusting and closing above the support-turned-resistance trend line and the 20 period MA.  Secondly, an uptick in bull volumes as shown by the volumes indicator, fuelling buy momentum and pushing prices higher. As noted yesterday, any appreciation and candlestick close above $90 means bulls are in charge. Therefore, judging from 13.10.2017 candlestick close-which was by the way accompanied by high -around $13 range, expect some consolidation in lower time frames in the next few trading days. Zoom into lower time frames and buy at any correction towards support. As long as the price is held below that region of resistance confluence, then bears should be in charge. For day trades though, that minor support trend line connecting 09.10.2017 and 13.10.2017 lows remains significant because, on three different occasions, bulls have rejected price erosion below $4.5 resulting in those long lower wicks and hints of buy pressure. However, despite that buy blip, immediate take profit target is at $4 now that bear volumes are surging, surpassing daily averages.