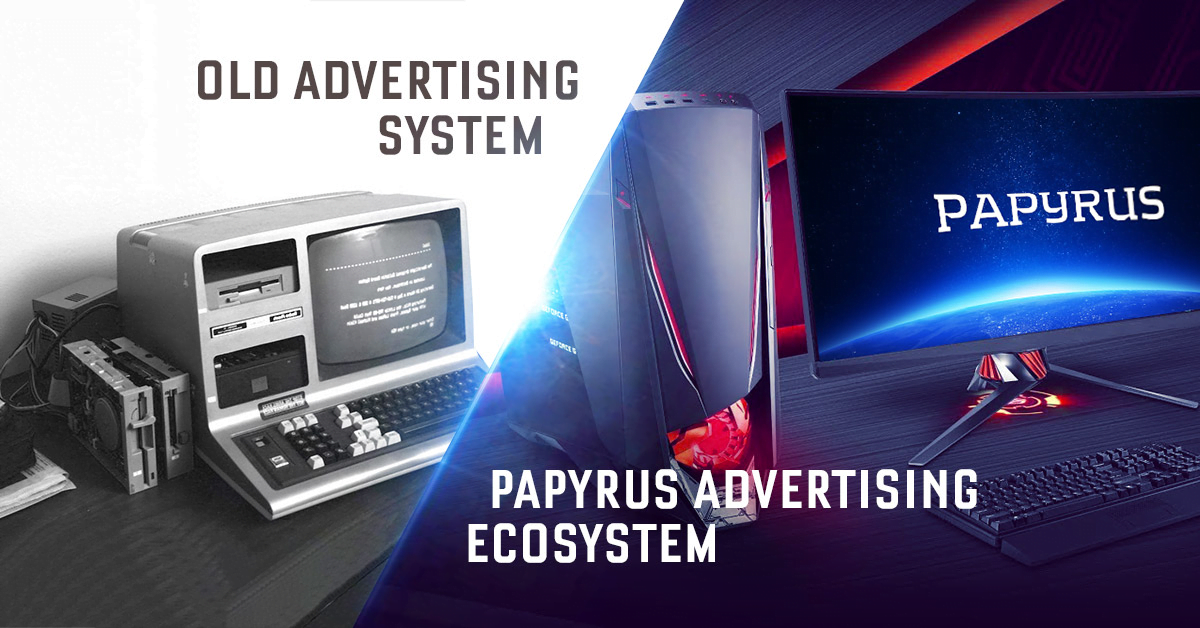 Papyrus: Blockchain, Other Tech Protect Advertisers , Users on the Net

Ad fraud traffic is a real disaster for the digital advertising industry. The size of the market is more than $200 billion (annually) and counting, but more than half of this amount goes to botnet owners and to other unscrupulous website owners, developers, and ad agencies. The key issue of the modern digital advertising market boils down to the fact that the advertiser gets only so much data about his or her campaigns.

Sure, the advertiser can track the well-known metrics—like clicks, views, time spent on the website—but that’s only the tip of the iceberg: the true efficiency of these metrics depends on their price and quality which is impossible to track and verify in the long-established digital advertising market. And still, any sophistication of the advertising performance evaluation methods is based on the above mentioned metrics. The number of clickthroughs and/or views—that’s the key point around which—along with sales volumes—the whole performance assessment of a given ad campaign is based.

Of course, targeting, audience surveys, and other marketing mechanisms and tools are used in order to increase this very performance (converting users into customers). But the current paradigm of the internet implies a relative privacy and anonymity of data. All the data that is used by marketing and advertising specialists is collected by internet giants like Google. These giants are legally obligated to “anonymize” data when reselling it—it’s naive to expect that there’s no detailed ‘folder’ on you somewhere. It’s just this ‘folder’ must stay on the corporation’s servers. Hence, what we have is a paradoxical situation: personal data and behavioural models for real people are so depersonalized and averaged (so that it wouldn’t be possible to track down a person through public sources) that a software engineer worth his salt will have no difficulty creating an army of bots that would imitate the behaviour of a real person on the internet. Well, this is how the marketing and advertising department of a hypothetical company “N” sees it, of course.

The “incompleteness” of personal data, millions of intermediaries, targeting based on them and a lack of customer feedback (to make sure there’s a person at the other end, not a bot)—all this causes the above mentioned pouring many billions of advertising dollars down the drain.

What is fraud, anyway? Primarily, it consists of the already mentioned botnets that mimic human beings and view ads, click links, and visit websites. Depending upon the level of sophistication of their creator, botnets might be so successful in mimicking the behaviour of real people that you won’t even suspect that half of all the clickthroughs to your website was made by money laundering machines. Another method of organizing non-human traffic is as old as in the internet itself—clickbait. In the classic sense, clickbait is an eye-catching ad or headline—anything that so powerfully grabs the attention of the user that he or she clicks the link. And ends up on a website that is of no interest to him or her whatsoever. The advertising publisher skims the “cream” off this interaction—yet another view and a corresponding amount of money from the advertiser’s budget. Bot traffic is most problematic when it comes to the mobile app development. As opposed to their web counterparts, mobile developers have no qualms about running bots that boost the views in their products in order to earn on ads (especially if a given app can be downloaded for free). Of course, advertisers and advertising platforms try to fight this but as in any field having to do with information security the ultimate resolution is not possible: any new identification method based on the depersonalized data paradigm will be countered by yet another ruse or method that will circumvent these verifications.

Papyrus is a token-based online economy for market participants with mechanisms enabling the transparency of arrangements/advertising transactions and the integration of audit suppliers. And it is better than the existing solutions because:

The proposed structure of interactions within the Papyrus advertising ecosystem will not only help increase the quality of advertising and facilitate its delivery to its true target audience but—most importantly—will help eradicate fraud as a phenomenon.

Papyrus uses the now popular blockchain technology. Blockchain, famously, is an end-to-end structure—an interconnected sequence of data blocks containing records (transactions)—that is completely transparent to every network participant. But blockchain itself is not enough—its maintenance costs should be justified and there’s no point in keeping all the logs of all the transactions on it. It’s simply impossible. The transparency is achieved by arranging payments in tokens and using blockchain to control the integrity and chronology of transaction data being kept in separate storage spaces—which is quite important when fighting fake traffic.

Currently, the Papyrus project has no analogue. It has developed a technology architecture that allows for avoidance of well-known blockchain scalability issues. The scalability of the Papyrus project will allow it to quickly and seamlessly grow up to any volumes in accordance with the demands of the market, processing billions of ad impressions on a daily basis. This comprehensive system will bring together users, publishers, advertisers, and developers of decentralized applications (dApps) making their interactions transparent and mutually beneficial.

The Papyrus decentralized digital ad ecosystem is built on top of the Ethereum blockchain and its smart contracts, a network of state channels for bandwidth scalability and a reliable decentralized data storage structure to minimize storage costs and maximize speed for handling large amounts of data.  Papyrus consists of 4 layers of architecture with the components of each layer developed as open source software. Papyrus will also employ blockchain-based identification and reputation management tools for ecosystem participants as well as a decentralized real-time-bidding (RTB) protocol that will support dApps and instantaneous transactions. This framework combines decentralization, capacity, and speed.

So why are high-speed anti-fraud solutions so important? Nowadays, integrating and connecting that kind of system takes a lot of time and effort. Besides, anti-fraud solutions aren’t exactly cheap. On an average, that kind of contract costs $200,000. That is, if an advertising aggregator has signed a contract with a provider, it’s virtually stuck with this solution forever.

The Papyrus ecosystem allows participants to create sophisticated consensus rules that would detect fraud immediately. Basically, the structure of the platform would discourage users from breaking the rules and motivate fair play because fraud would be quite easily detected through cross-validation by several providers and penalty fees would be deducted from their own ecosystem participant’s Proof-of-Stake deposit (placed when registering in the ecosystem).

The key thing that unscrupulous market players cannot hide is the simple metric of conversion that we’ve mentioned in the beginning of this article. Its clumsiness notwithstanding, conversion is a valid metric for the performance of a given ad campaign and the quality of the services provided by publishers or platforms to advertisers. Conversion implies user expenses or a much more complicated model of behaviour (using the advertised product) than any bot can mimic. But unless we have a transparent public accounting and ranking system we can’t possibly know how “clean” a given market participant is.

The advertiser can only take guidance from website reviews and results given to him or her by the publisher. Blockchain and state channels eliminate the very possibility of the manipulation of facts: all the information about ad campaigns, conversion and the level of satisfaction of users with advertising (based on feedback) will be available and completely transparent to all the participants. Papyrus will employ blockchain-based identification and reputation management tools for ecosystem participants as well as a decentralized real-time-bidding (RTB) protocol that will support dApps, instant transactions, and a transparent environment for working with programmatic advertising.

In order to accelerate the market adoption of the Papyrus ecosystem, it will have special open-source gateways that would be easily integrated into traditional advertising systems thus making them part of Papyrus.

Papyrus has completed the working prototype and is starting its first real integrations in the advertising market.Prototype smart contracts have been successfully deployed on the Ethereum mainnet; and the prototype Core code successfully executed a series of dRTB transactions.  After passing the audit by Ambisafe, the prototype PRP token was deployed. Now the contracts remain operational on the mainnet, ready to support the coming registrations of new participants  Papyrus already has started the first strategic partnership and integrations with Airpush, Bancor, WINGS, and BitClave.

It’s quite obvious that service providers with low or suspicious ratings will not be able to dictate the market price for their services which will at least result in the balancing of price and quality.

The current digital advertising market is built by intermediaries and for intermediaries: tech companies collecting data and publishers selling ad spaces. Advertisers together with users are left out—they are on the sidelines. Papyrus aims to change the status quo and to make the digital advertising market beneficial for those who are truly interested in the market as an efficient tool and not for those who use it exclusively as a means of easy money and to create the conditions in which advertisers will be much more efficiently protected from fraud traffic and they will get much higher results for the same amount of money.

Economic benefits would amount to billions of dollars globally, and the internet will become comfortable for users because there will be no malicious and fraudulent advertising anymore. Papyrus does not aim to eliminate or get rid of intermediaries in the process of ad buying but it will make interactions with them completely transparent and clear to all market participants.

The tokens of the project are selling now during the Papyrus crowdfunding campaign that has started on October 12. You can support the idea of properly cleaning up the digital ad market with cryptocurrency on the Papyrus ICO website

Read More
Tags:adtechadvertisingbancorpapyrus BitStarz Player Lands $2,459,124 Record Win! Could you be next big winner?
Next Post