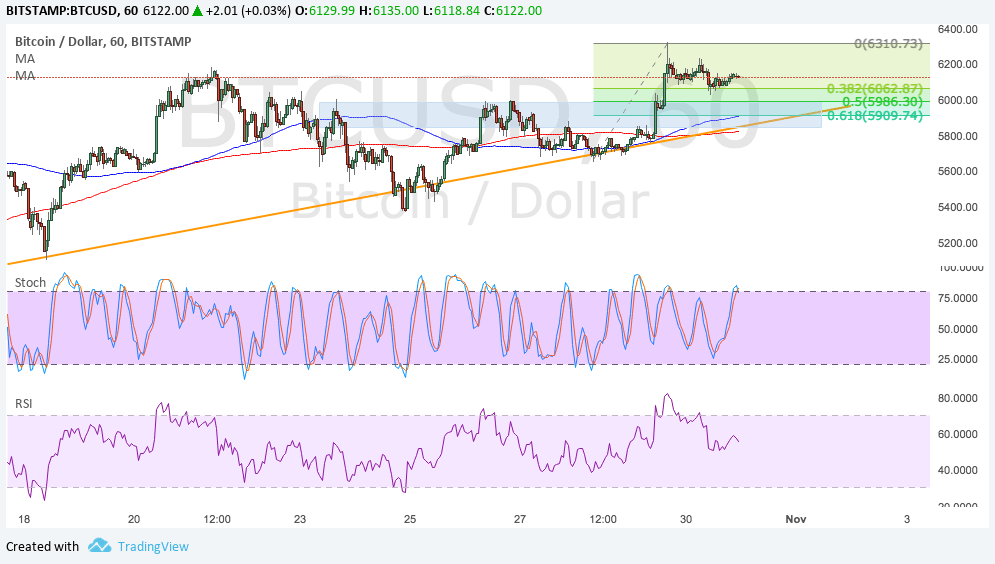 Bitcoin price could be due for a correction to the nearby area of interest around $5900 before heading further north.

The 100 SMA is above the longer-term 200 SMA so the path of least resistance is still to the upside. In other words, the rally is more likely to continue than to reverse. In addition, the moving averages are close to the rising trend line support connecting the latest lows of bitcoin price action.

However, stochastic is nearing overbought levels to indicate rally exhaustion and a return in bearish pressure soon. RSI is already on the move down so bitcoin price might follow suit. This could either mean that a deeper correction is underway or that a break of support could take place and spur a reversal. There are plenty of catalysts lined up for the US dollar this week, particularly the November FOMC statement and the NFP report. These are likely to shape market expectations for the December decision and whether or not an interest rate hike is likely.

Traders are also waiting on the announcement of US President Trump on his Fed Chairperson appointee. Reports are showing that he is leaning towards picking Powell, which could mean a bearish scenario for the dollar that bitcoin price could benefit from.

Bitcoin also has catalysts of its own, particularly the network upgrade or hard fork. Market watchers are eager to find out if the cryptocurrency could enjoy the same result as in the August hard fork, which would likely mean another set of record highs in the coming weeks.