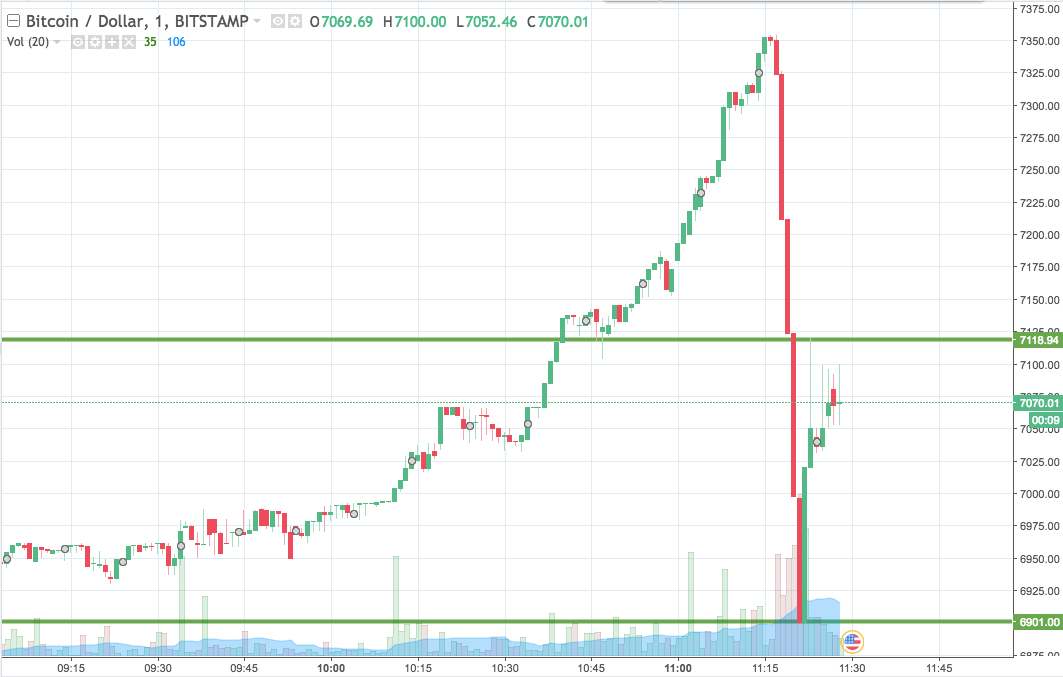 Things are getting a little bit crazy out there in the bitcoin price world. After an immense run overnight brought price to trade in excess of the 7000, just a matter of days post-6000 break, things took a turn for the worse and price gave back a large portion of the run on a severe correction. The chart below shows how things played out but, to briefly explain, we saw price run-up to early morning, intraday highs in and around 7350 before collapsing to around 6900 in a matter of minutes.

This 6900 level served up a degree of support, and we’ve since seen a little bit of a bounce towards 7070, so from a near-term perspective at least, it looks as though the correction will turn out to be just that – a short-term correction.

Anyway, all we can do is play the action as it plays out.

Let’s get some levels in place that we can use to try and push forward into the session today and see if we can draw a profit from the market as we head into what’s likely to be a bit of a wild day.

As ever, take a quick look at the chart below before we get started so as to get an idea where things stand and where we are looking to jump in and out of the markets as price matures.

It’s a one-minute candlestick chart and it’s got our range overlaid in green. As the chart shows, the range we are looking at for the session is defined by support to the downside at 6901 and resistance to the upside at 7118. We’ll jump in long on a close above resistance, targeting 7150. Conversely, if we see a close below support, we’ll jump in short towards 6850.