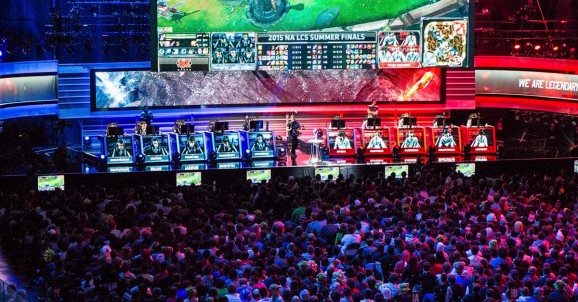 Video games have never been more popular or more captivating. Impressive new technologies and changing consumer habits have led us into a golden age of video gaming that is providing a new experience and new possibilities. One of the most compelling expressions of this is the emergence of esports, which is a beautiful combination of competition, community, betting, and entertainment.

Sports Illustrated reported on the esports industry, and they determined that “Last year, the industry produced an estimated $493 million in revenue…and that number is projected to surpass $1 billion by 2019.”

In other words, esports is big business, and the best businesses are just starting to emerge.

2017 is the year of the blockchain. Best known as the powerful accounting backbone of cryptocurrencies like Bitcoin and Ethereum, blockchain technology is enabling revolutionary changes in the gaming industry. Everything from improved P2P platforms to unique crypto tokens can be attributed to the blockchain. In seemingly every way, the blockchain is a godsend for gamers.

Skrilla, an esports daily fantasy platform developed by Puntaa and Gamurs, capitalizes on powerful blockchain technology to create a single token that allows users to enter contests, place bets, and receive winnings. The Skrilla token launches its ICO this November, and it’s right on time because esports and blockchain seem to be made for one another.

While esports is growing in popularity, the industry requires maturation in order to realize its full potential. For example, with popularity and prominence comes a need for improved security capabilities. With so much money trading hands, users must have confidence that their bets will be honored, and their winnings will be paid. The smart contracts built into blockchain tokens like Skrilla act as a real-time escrow account that receives and releases funds according to predetermined agreements set forth in the contract. This means that Skrilla users can participate with confidence so that the video gaming and community involvement are the focal points of the platform. Even without the best technologies in place, the demand for esports is creating a wild-west environment where unregulated and potentially unlawful platforms are striving to meet consumer demand. In their extensive overview of legal and ethical issues in esports, Forbes acknowledges that “As with any budding big business, legal and ethical issues arise with regularity.” As a result, platforms that can guarantee regulatory compliance and legality are at a premium. Blockchain-based platforms like Skrilla are able to achieve this with greater regularity and greater accuracy because of their data reliability and unbridled transparency.

One largely unacknowledged upside of crypto-tokens is that they operate as a functional currency that can increase in value as the platform becomes more popular. This is a great incentive for early entry because it represents a buy low sell high scenario. Because there are a finite number of ICO tokens, as the platform grows in demand, so do the tokens that power it. Users who participate in an ICO gain valuable perks while also getting in the game at a relatively low cost. ICOs allow users who could never participate in a venture capital fund to participate in a product or platform launch that can have valuable rewards as it develops and matures.

There seems to be no end to the possibilities for esports. Colleges are certifying it as a sport, it’s rumored to have a place in the Olympics, and it’s an entertainment medium that perfectly encapsulates some of our greatest tires. When blockchain, arguably the most transformative new technology, and esports, the most popular competitive trend, come together, everyone stands to benefit. With their ICO launch on November 6th, platforms like Skrilla are providing easy-to-use esports arena that represents the best expressions of esports, community, competition, and technology.

Tags: blockchain technologycryptocurrencyeSportsSkrillastart-ups
TweetShare
BitStarz Player Lands $2,459,124 Record Win! Could you be next big winner? Win up to $1,000,000 in One Spin at CryptoSlots