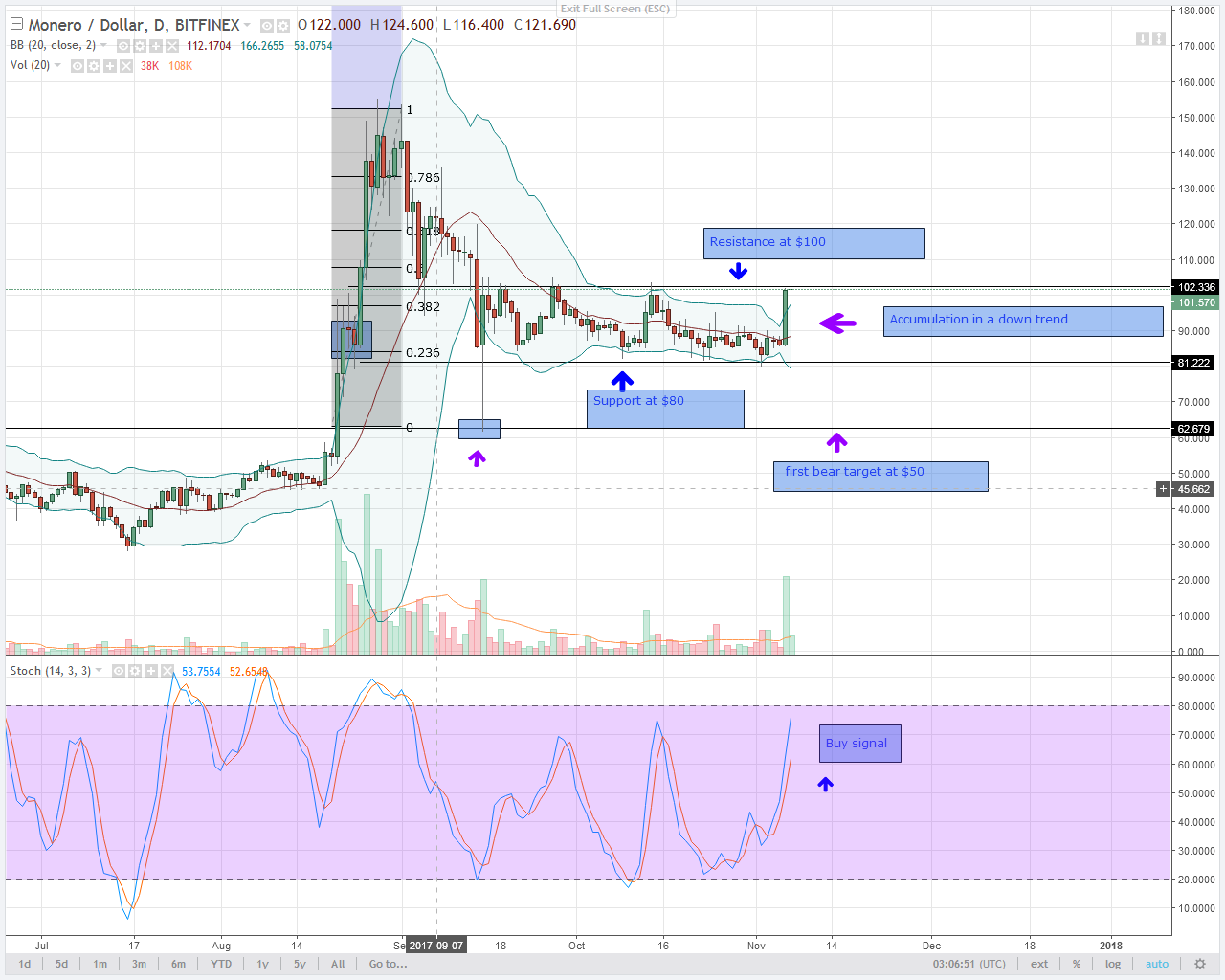 Alt coin Monero moved $16 yesterday breaking above minor resistance level at $90. This price surge followed a bullish divergence pattern after November 2, a common pattern in all other alt coins except NEO. I expect a short term across the board appreciation of alt coin s in the coming sessions.

Alt coin NEM ended up as a bull after yesterday. Since price action is trending within a break out strategy, the two support and resistance trend lines defining the wedge before a break below are still important.

There is a stochastics buy signal in place and a strong reaction at $0.19. This is the break out price on October 31when alt coin NEM prices closed at $0.19 and triggered further NEM slide. If anything, the current correction up is a retest. As mentioned yesterday, we shall wait for a stochastics sell signal to form at the overbought territory.

Even though the sell pressure as denoted with that long upper wick with highs of $0.22 is high, our ideal sell zone remains unchanged at around $0.22 and $0.25.

As mentioned yesterday, the 20 period MA is an important level for alt coin DASH. Over an extended period of time, price action couldn’t close above it until after yesterday’s close of $287 and a test of resistance trend line at $295.

You also notice that this is after a bull divergence pattern was formed between October 9 and November 2. On November 5, DASH ended up with a bullish pin bar and a buy signal indicating DASH bulls build up. With that break above 20 period MA resistance line, DASH bulls can continue buying until a stochastic sell signal shows.

If you paste a Fibonacci retracement tool between August –September Hi-Los, important reversal points to watch out will be at $335 and $370 resistance levels falling at 38.2% and 23.6% correction levels. Both of those levels are significant.

There are two important technical considerations for this crypto pair. First is the obvious price action bull divergence with the stochastics. Note that between October 13 and November 2 lows of $0.40 and $0.32 respectively, stochastics were turning higher and higher.

This bull pressure build up has resulted in that double bar reversal pattern at support minor support line of $0.32. IOTA bulls should also note that the Morning Star pattern between October 21 and 24 marked a support zone which prevented further price depreciation yesterday. As you can see, after November 2 lows of $0.32 price actually inched higher afterwards.

Today, there is a high probability that there will be a break above the 20 period MA and the resistance trend line  following that double bar reversal pattern yesterday. If it does and IOTA end up closing above $0.38 now resistance level, bull target should be at $0.60. This level represents September 30 highs and a confluence point with Fibonacci correction level of 61.8% drawn from August-October Hi-Los of $1.1 and $0.32.

Monero was in a rally mode yesterday. Following a bullish divergence as previously noted, price action was pushed back into the trading range after that double bar reversal pattern on November 2 and 3.

The reversal pattern was accompanied by a stochastics buy signal following sustained buy pressure over a 16 trading day period. Notice how the 20 period MA resistance  line couldn’t hold yesterday’s strong bullish candle. It is a mark of intent by alt coin Monero bulls. I expect prices to correct following this $16 surge propelled by above average volumes.

Unlike other crypto pairs, NEO trade range is very tight. In 4 trading days, price action has been in consolidation within a $4 range. The limits are between the lows of $24 and highs of $28 oscillating within a descending channel.

Zooming in close and you notice that this is a short term bull flag with support level at $22. Most alt coins are moving up and I expect NEO to rise with the tide. To do so, NEO bulls must break above the 20 period MA and the minor resistance line at $28.

Notwithstanding, we cannot ignore that we are in a larger bear trend and we expect USD bulls to jump in at around $40 resistance level.