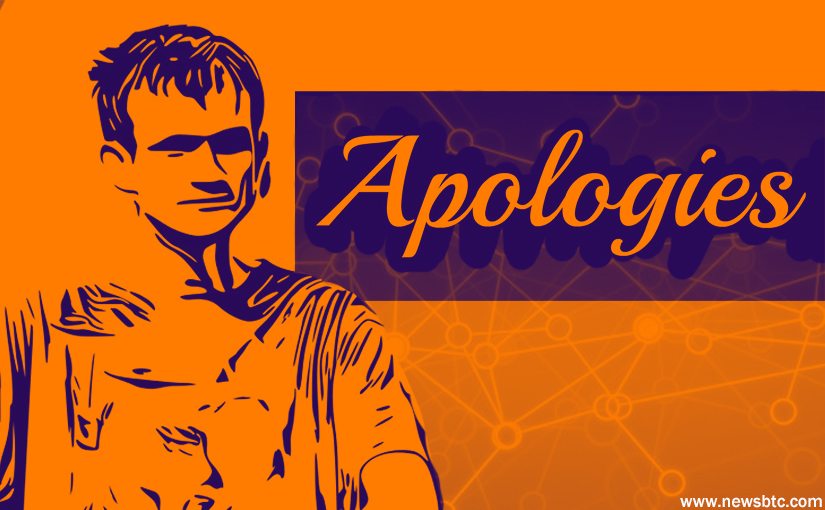 There has been a lot of commotion involving Bitcoin Cash as of late. Things got especially interesting when Vitalik Buterin suddenly started “supporting” this altcoin. More specifically, his tweet caused a fair amount of backlash. Publicly congratulating Ver and Wu on the success of BCH isn’t out of the ordinary. Not even when this altcoin briefly surpassed Ethereum in market cap. However, others saw it as a flawed thought process. In the end, Buterin did the right thing and apologized for this strange comment.

Collaboration is key in the cryptocurrency world. No one will deny that is the case in this day and age. However, there is still a lot of bad blood between BTC and BCH supporters these days. Vitalik Buterin sparked the proverbial hornet’s nest by issuing some comments on this situation. He seemingly hinted at how the community is responsible for this fractured way of thinking in Bitcoin. That was not the case, as a few individuals have riled up some people to support their cause first and foremost.

Moreover, Buterin suddenly found himself in this “war” between Bitcoin communities. Congratulating the BCH team on their success wasn’t appreciated by real Bitcoin supporters. Especially not in the light of his recent other comments either. For all intents and purposes, these “attacks” by both communities shouldn’t have been endorsed or supporter to begin with. Offering words of congratulations to either “side” in this regard is very dubious, to say the least.

I do regret writing the tweet in that way. My goal was to express happiness that the portion of the bitcoin community that dislikes the mainline roadmap now has a clear alternative to crystallize around, and that it is doing so well.

In the end, Buterin explained he wanted to “express happiness” for an alternative Bitcoin solution. Competition is a good thing in cryptocurrency, even when it comes to Bitcoin. Not everyone has the same points of view, yet they still deserve a tool to work with. It is good to see this issue being put to rest in a professional manner, though. Most Bitcoin discussions often erupt in flame wars rather than cordial exchanges on Twitter or other social media.

The bigger question is how all of this will look in a year from now. So far, Bitcoin and Bitcoin Cash co-exist without too many issues. There will always be bickering and mudslinging, though. Political differences are still driving a wedge in between community members. It is doubtful the Bitcoin community will ever come together as a whole again unless something changes dramatically. Right now, that seems highly unlikely. In the end, Bitcoin Cash isn’t Bitcoin and it won’t be for some time to come.

Tags: BCHBitcoin CashBitcoin NewsVitalik Buterin
TweetShare
BitStarz Player Lands $2,459,124 Record Win! Could you be next big winner? Win up to $1,000,000 in One Spin at CryptoSlots