Litecoin still leading as it climbs the crypto table 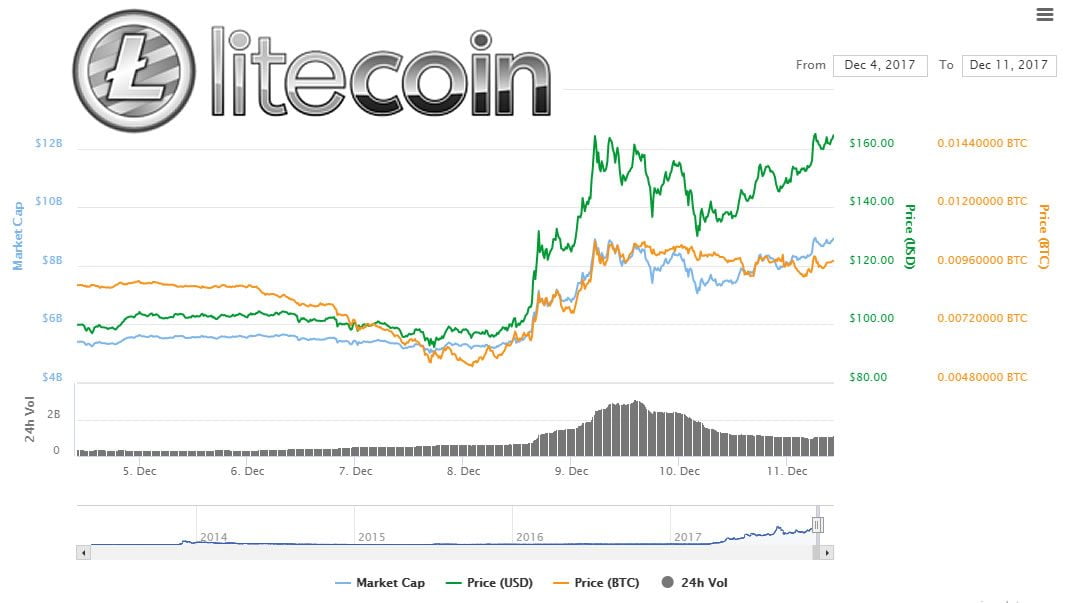 This weekend has seen some pretty wild price swings, especially from big daddy Bitcoin which fell by 26% from Friday’s high of $18,300. As excitement and interest mounted leading up to the launch of CBOE’s futures contracts on Sunday BTC bounced from support at $13,000 yesterday morning to climb back up to around $16,500 where it is trading at the time of writing.

When Bitcoin starts going vertical altcoins usually suffer however there is one coin that has rode out the waves and stayed on top, keeping its recent gains of over 50% in a week and maintaining support levels. Litecoin saw an epic jump from around $100 to over $150 on Friday and into trading on Saturday.  Usually when this happens there is a market correction and support is broken sending the price back down to normal levels.

Litecoin did fall back to $130 on December 10 but has since risen back to its all-time high of $160 where it is currently trading. With all the attention on Bitcoin, its slower transaction speeds and higher fees are emphasized, and Litecoin looks like a better alternative. This is highlighted even further by its price and the fact that it has been extremely stable over the past six months or so when all other altcoins have been swinging all over the charts.

Litecoin is currently the sixth largest crypto currency by market capacity, which at the time of writing is $8.3 billion. Just above it in fifth place is Ripple which has shown very little movement in either direction for the past six months where it has traded between $0.16 and $0.26. XRP has a market capacity of $9.4 billion according to Coinmarketcap.com, total supply is almost 100 billion with around 38.7 billion already in circulation.

Below Litecoin in seventh place on the market cap table is Dash which is at $5.6 billion. Dash, with a maximum supply of 18.9 million and 7.7 million already circulating has traded in a sideways channel for the past week between $660 and $780.

Comparing these to Litecoin’s total supply of 84 million with a circulating supply of 54.2 million it is beginning to look like a far better bet at a far better price. With recent rises in price and interest for what is often called the silver to Bitcoin’s gold, this one could go a lot further and we could be seeing Charlie Lee’s Litecoin reach $200 before the end of the week.

Tags: Litecoinlitecoin analysis
TweetShare
BitStarz Player Lands $2,459,124 Record Win! Could you be next big winner? Win up to $1,000,000 in One Spin at CryptoSlots