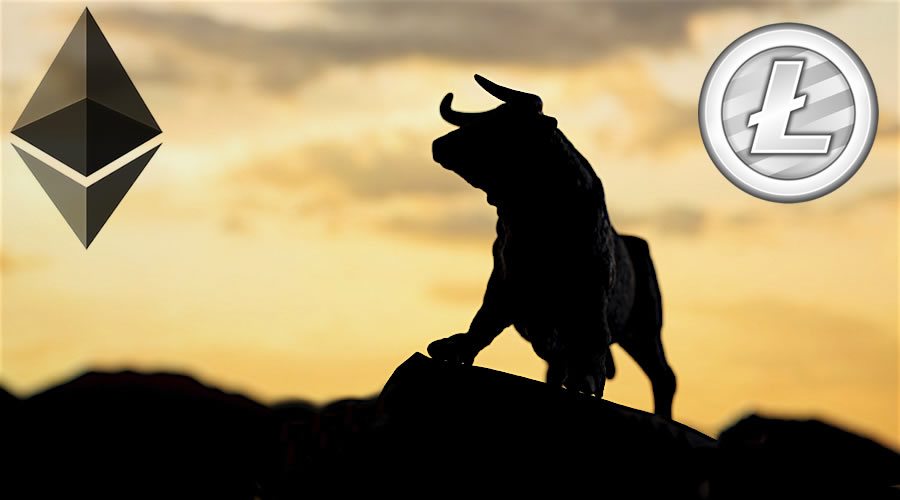 The Bitcoin Bulls dominated last week with some heavy swings in both directions but mainly upwards. Crypto’s King made all the major news channels and papers as it shot from just over $11,000 to over $18,000 in less than a week. Regulated US exchanges launching their futures contracts also added to the zeal in the crypto-sphere.

This week it is time for some of the altcoins to get some Bullish love. Two of the top traded assets, Ethereum and Litecoin both broke record levels and traded at all-time highs during the Asian trading session this morning. LTC has been having a monster run over the past four days, climbing almost 150% from $100 on Friday to over $250 today.

Data from Coinmarketcap.com shows that $4.2 billion dollars has been traded in Litecoin in the past 24 hours. Top exchange was GDAX, which is owned by Coinbase, handling over a billion dollars of that trade and almost 25% of the total. LTC is huge in South Korea so it came as no surprise that Bithumb was the second exchange in terms of transactions with almost $500,000 traded in the past 24 hours, which equated to 11.6% of the total.

Founder Charlie Lee remains cautious however and Tweeted that trading was extremely risky. Litecoin was not alone in the crypto bullpen today. After three weeks of slumber Ethereum finally woke up and headed skywards. From trading sideways between $440 and $460 ETH broke key resistance levels and made moves towards the critical $500 level. It had previously tested this price in late November but failed to break through.

The CryptoKitties fad which drove previous prices up resulted in the network getting drowned in digital moggies. Transactions slowed to Bitcoinesque speeds and traders waited hours for their ETH to clear. The network was slow to recover but recover it did today when it reached an all-time peak of $552 before correcting back to the $525 level where it currently trades.

Big banking news is likely to have caused the some of the rotation out of Bitcoin into Ethereum. Reports that major financial institutions including UBS, Credit Suisse, Thomson Reuters, KBC, SIX, and Barclays were planning to adopt smart contracts based on Ethereum provided a long awaited boost to the blockchain.

Those with altcoin investments will be having a happy Tuesday as both Litecoin and Ethereum have come out on top today.

Tags: Ethereum AnalysisLitecoin
TweetShare
BitStarz Player Lands $2,459,124 Record Win! Could you be next big winner? Win up to $1,000,000 in One Spin at CryptoSlots