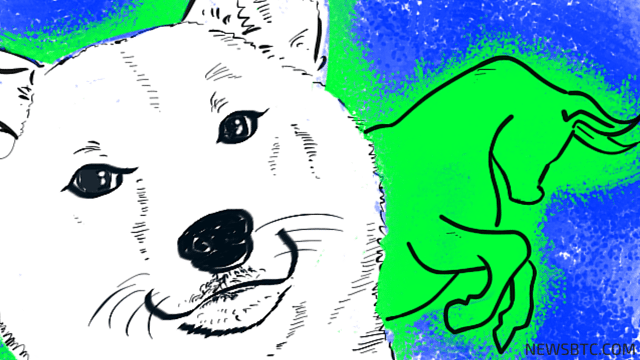 Dogecoin Woofs at Moon with a Billion Dollars

Anything goes in the cryptoland, so much so that an altcoin created as a parody has just reached a billion dollar market capacity. Dogecoin was created in 2013, its mascot is a Japanese Shiba Inu dog made popular by an internet meme dating back eight years.

The dog it seems has broken off its leash after being largely left behind last year as other altcoins too center stage. Defying its creator’s belief, DOGE has risen 900% in the past six weeks from $0.001 to its current high of $0.01. What is more astounding is that it has surpassed the billion dollar market capacity which puts it just behind Russian crypto platform Waves in the market cap charts. Over $120 million has been traded in DOGE in the past 24 hours according to Coinmarketcap. Jackson Palmer, the founder of the cryptocurrency who left the team in 2015, is concerned;

“The fact that most conversations happening in the media and between peers focus on the investment potential is worrying, as it draws attention away from the underlying technology and goals this movement was based on. I have a lot of faith in the Dogecoin Core development team to keep the software stable and secure, but I think it says a lot about the state of the cryptocurrency space in general that a currency with a dog on it which hasn’t released a software update in over 2 years has a $1B+ market cap.”

“To me, this proves that we don’t need shiny features or a ton of innovation and even with a conservative – and in my own case completely distracted – development team for a boom,”

The sentiment was shared by another developer on the team, Max Keller;

“It’s a little scary when you work on software that powers a billion dollar network. This is quite the responsibility. And also one of the main reasons why we are so reluctant to just slap any ‘innovative’ tech into the reference client. Still, I am proud of what we achieved and thankful to be part of such a great community.”

Dogecoin does not really have a grand purpose aside from being a simple internet currency. Its appeal could just be its low cost. There is a psychological barrier to overcome when a single digital coin such as Bitcoin is worth $15,000, new traders would be more comfortable owning several thousand smaller altcoins than a fraction of a Bitcoin. Digital assets trading house Octagon Strategy managing director Dave Chapman told CNBC;

“The two most well-known cryptocurrencies (i.e. bitcoin and ethereum) are considered too expensive for most new entrants. Despite being able to purchase a fraction of each, there is a real psychological barrier around owning something in its entirety,”

DOGE is currently traded the most on Bittrex and Poloniex which have 23% and 20% of the volume respectively.

Dogecoin Woofs at Moon with a Billion Dollars was last modified: January 5th, 2018 by Martin Young

Read More
Tags:altcoinbitcoincryptocurrencydogeDogecoininvestmentPump and Dump BitStarz Player Lands $2,459,124 Record Win! Could you be next big winner?
Next Post