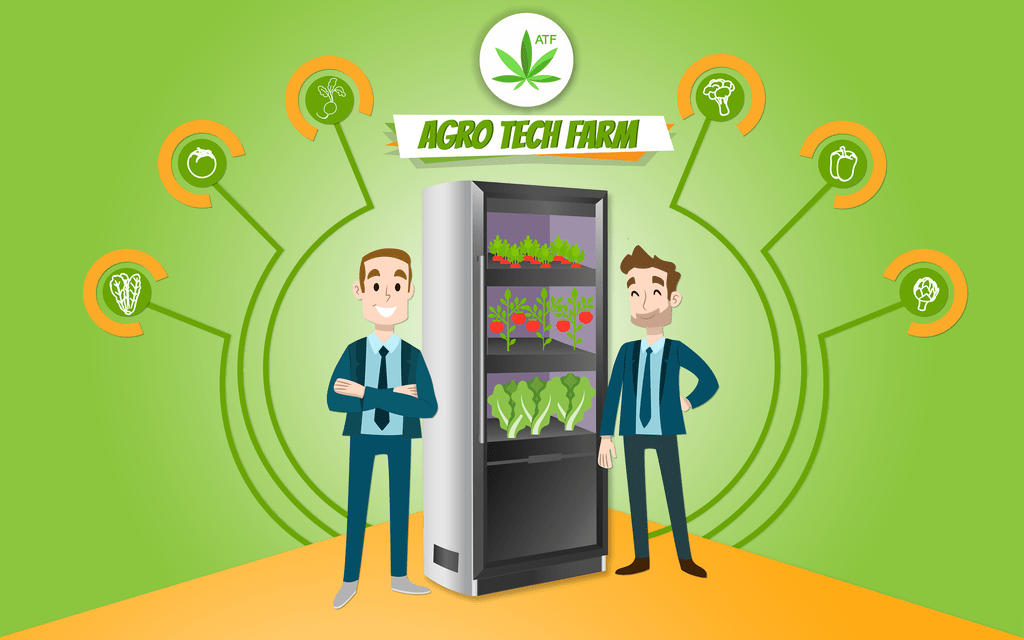 AgroTechFarm CEO Ilya Tsigvintsev has a personal connection to the ATF Homegrowers. For him developing the appliance is more of a personal struggle than a business venture. Due to health conditions, organic food was for him is not a caprice but medication. Here is his story!

Ilya was not of the teens who had acne. Yet, at 20 he started having red rashes that looked quite similar. He initially thought it is a late adolescence outburst and did nothing for years. However, 5 years later, age 25 his condition was getting worse. Thinking it was simply a skin condition he visited a cosmetologist. They told him that this is not typical acne, his body was full of toxins. The most likely cause – poor nutrition. The advice was to go get his digestive system checked.

Unfortunately, the cosmetologist was right and Ilya’s acne was a symptom of a more serious health problem. The cause of his skin condition was an underlying digestive problem – gastritis of the duodenum (small intestines). One of the likely cause for this condition is contact with caustic acids and similar substances.

Seems strange, doesn’t it? How would a substance that destroys organic tissue (bodies are all organic tissue) end up in our food?

Caustic acid in tomatoes and other crops

Turns out that the use of caustic acids is quite common. Googling the term gives out around 2 million results. Guessing by that, Ilya is unlikely to be the first victim of this practice. Farmers use these chemicals together with silicone sprays and colorants to make their crops last longer, larger and more visually appealing.

Although the issue is most prominent in India, according to Ilya European producers also resort to these practices when importing to Russia due to the huge distances.

If you wish to get more information many medical journals contain peer-reviewed papers on the matter. Or if you are feeling too lazy for academia check out this video by Vice.

Want something done well? Do it yourself!

Doctors told Ilya that going organic is the most important step to improving his health.

Unfortunately, during winter time in Russia, it is impossible to grow any crop. This means that almost all of the plants on the market, have traveled more than 2500 km. Keeping tomatoes fresh during such a trip perhaps takes a lot of silicone spray and caustic acid.

Where are regulators you might think. Well, even though many growers in Europe undergo certification, when it comes to Russia, the EU has no jurisdiction. So, a quality European producer might resort to these practices when they are exporting for Russia, simply because they can get away with it. This makes finding clean food even more difficult.

Ilya was having a hard time finding 100% organic food to treat his condition. Going to the farmer’s market did not provide a solution. Since there was no available solution to the problem, Ilya decided to create one.

The farmers market can’t be trusted. Where he lived was too cold for having a garden in the backyard. So, his only option was to find a way to grow at home. His experience with hydroponics and the emergence of indoor gardens got him thinking.

Eventually, he was ready with his concept. However, he lacked the manpower to make it into a working prototype.

Luckily, in 2012 his journey led him to Alexei Kovnerchuk. He was looking for equipment to grow vegetables faster and more efficiently. After a short conversation they realized that they can be of good use to each other.

Fast forward to present day and the ATF Homegrower is a working appliance with a sleek design. Since the prototype is operational Ilya has been getting all of his veggies from the grower. Looking at his picture, there is no trace of his skin condition. Most importantly tho, his digestive problems are in the past.

Want to learn more about the appliance itself? Check out this piece.

Having a working prototype and being healthy is great. However, Ilya and his team know that many others still having the same problem. The aim of their ICO campaign is to raise money for mass production of the ATF homegrowers.

As well as that they have substantial buyback program of 35% of the total yearly profits! You heard right, AgroTechFarm will repurchase ATF tokens each year to bring up the price or reduce downfall during dips like the one we experienced this January.

If you wish to learn more about the ICO and the ATF token this article is for you!

The ATF homegrower is a sleek looking indoor garden. The fact that it is fully automated makes it ideal even for those who have never touched soil with bare hands.

The buyback option and hard cap on the suggest that the team is not following blindly the motto: the more the better. They have a strict plan how the funds will be used and do not plan to raise additional funds. Something quite rare in the ICO sphere where most project do not have a cap on the maximum amount of money they want to raise.

Before investing make sure to your research! Check out their whitepaper and website.

If you are interested in the project come and join the talk over at Telegram! The team is more than ready to answer all of your questions!