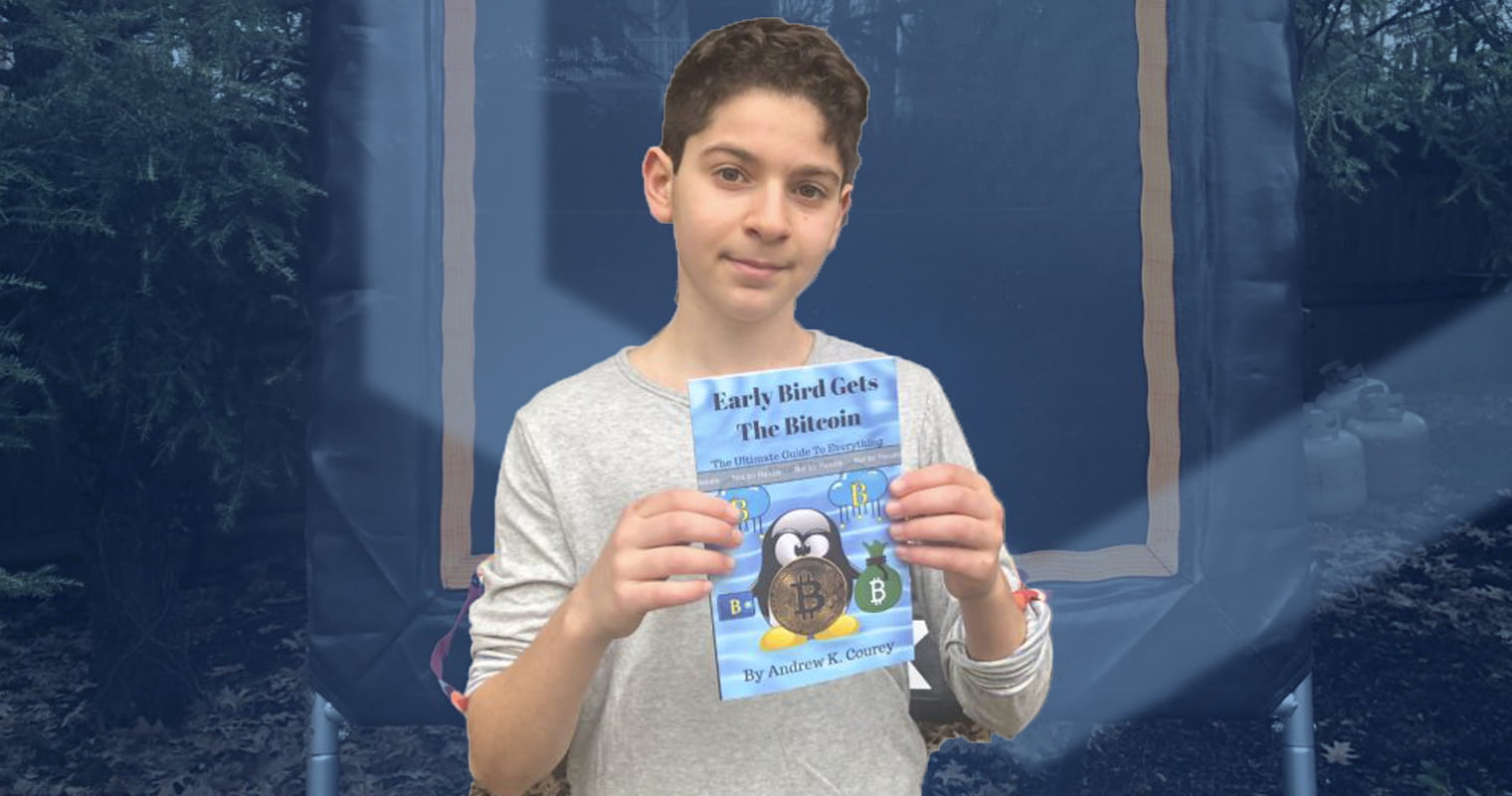 11-year old Andrew Courey, son of Matrix Capital Management founder Jeff Courey, is surprisingly the author of a self-published guide about Bitcoin. “Early Bird Gets The Bitcoin: The Ultimate Guide To Everything About Bitcoin” has been available on the Amazon Kindle since January.
It all started last year when Andrew Courey was planning to earn $20 million by the age of 14, so he could drop out of school. He then looked for investment opportunities, including bitcoin and all the overnight fortunes made through investing and mining the cryptocurrency.
Andrew wasn’t yet convinced of bitcoin as a source of “passive income”, even after the price surged exponentially late last year, where he bought .00222 bitcoin just before Christmas. To completely figure out if it was a good investment, it would require dozens of hours of reading. And that’s what he did. But the idea for the book came from his dad, suggesting that he should make the best out of the time invested in the subject.  Writing and selling a book that simplifies all those complex concepts around bitcoin and blockchain would be a clever way of putting his research to good use.
Andrew spent three months to research, write and, with the help of his parents, edit the 57-page book that includes chapters on bitcoin, bitcoin wallets, the cryptocurrency Ethereum and initial coin offerings.

“Anyone can learn about cryptocurrencies if they’re willing to spend 70 to 80 hours researching every source until they find a couple sources that make sense. The whole book, in the simplest terms, is very easy to read and simple to understand”, Andrew Courey told CNBC.

14 BTC & 95,000 Free Spins for every player, only in mBitcasino’s Exotic Crypto Paradise! Play Now!
“Over the holiday period, he locked himself in his room and just cranked”, his dad added.
Written in a simple and accessible way, Andrew’s book finds real-world analogies to bitcoin and blockchain, such as comparing the distributed ledger technology blockchain to a Google Docs file “shared with everyone that can only be edited by buying or selling bitcoin.”
Another example is how he describes a bitcoin wallet by explaining that there’s a public key available to anyone and a private key that only the owner can access: “Imagine there is a mailbox — the mailman can drive the mail to any mailbox, but only the person with the key can access the mail.”
Maybe because of curiosities such as the current power consumption required for mining being “estimated to be more than that of 159 countries”, Andrew revealed he’s more willing to invest in Amazon shares rather than bitcoin. Anyway, his grandiose plan to reach $20 million in equity may include a startup of his own: a mobile app for math flashcards. Andrew has it all figured out. He aims to scale it to $2 million in earnings so he can sell it for 10 times profit and get to drop out of school. Andrew didn’t say if the mobile app will be based on blockchain technology.
TweetShare
BitStarz Player Lands $2,459,124 Record Win! Could you be next big winner? Win up to $1,000,000 in One Spin at CryptoSlots