The TOSS Token – Metrics, Economics and Bonuses. All You Need to Know 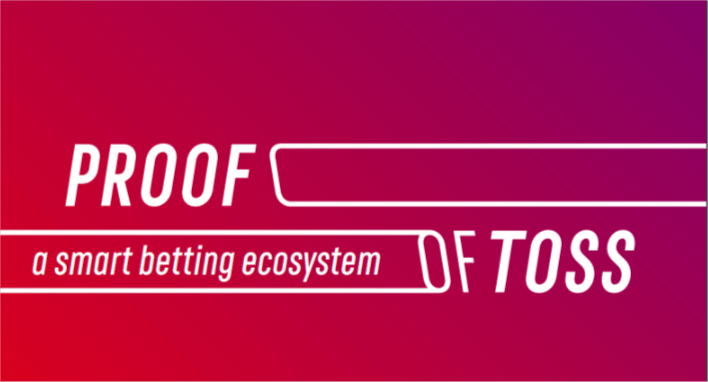 PROOF OF TOSS is a new betting platform built on blockchain where users can create wagers, bet, and judge. The project’s goal is to disrupt the traditional betting industry and improve user experience in this area. The team has developed the first betting protocol on RSK which is fueled by TOSS tokens. The project is in its closed token sale stage now, but everyone can join the whitelist and get 1000 bonus TOSS tokens, for a purchase of any amount.

PROOF OF TOSS is an ecosystem for betting, that will act as a peer-to-peer platform for end-users and also will provide a white-labeled open source solution for operating companies to supply events on any scale. With PROOF OF TOSS, users get transparency, protection from fraudulent activities, great market coverage, and the possibility to bet on anything. Everything on the platform is embedded in the logic of smart contracts, powered by the promising RSK blockchain, that has recently released its main net.

TOSS is a utility token of the ecosystem, that is used to create wagers, place bets, vote on results, create deposits and collateral, receive prizes and rewards. Tokenization, in general, provides betting with many advantages, such as faster transactions and guarantee of fair results. Also, tokens help scale the system and reduce the risk of server crashes and other technical fails.

TOSS token will have only four decimal places because it’s inconvenient to bet with a coin divided into too many parts. If you play with a highly fractional coin, it’s very likely that you will make a mistake and as a result, bet ten times more or ten times less than you wanted. If a token is divided only into ten thousand parts, it is easy to see all the zeros, no need to count them. Such usability is valuable for players.

In PROOF OF TOSS, a total of 1 billion TOSS tokens will be released. 70% will be distributed amongst all buyers of the token sale, according to their purchase, and bonuses. 30% is reserved for the core team and advisers (7%), bounty (1%), whitelist (1%), founders (10%) and 11% for the PROOF OF TOSS Foundation.

The project has an unusual token economy: tokens that won’t be sold will be distributed between all token sale participants in proportion to their purchases. During the token sale, the per token price will be $0.17. However, the actual token price is flexible due to the fact that all unsold tokens will be distributed amongst token buyers. Therefore your purchase will not lose its value but the amount of tokens you receive when the token sale is over may vary. For example, if you spend $85 and don’t qualify for a bonus you will receive a total of 500 TOSS tokens. However, if during our token sale we only sell 200m TOSS tokens, the remaining 500m will be distributed amongst all buyers in proportion to their initial purchase and you will receive an additional 1249,9999 TOSS tokens, totaling your purchase to 1749,9999 TOSS tokens at a price of $0,04857143 each.

Unsold tokens are often burned after the token sale, that allows the owners to control the supply of their tokens. But tokens in PROOF OF TOSS don’t just represent an abstract value, they are used to interact with the platform. The project is aimed to facilitate many users, and thus needs a significant amount of tokens for evolving. By estimation, an amount of billion tokens will cover weekly turnover.

PROOF OF TOSS is going through it’s closed presale stage now. Currently, the minimum purchase is $50000 with a volume-based bonus starting from 30%. The total amount of TOSS tokens available for the private sale is limited to $17500000 worth.

However, the first 10000 people that join the whitelist and purchase TOSS tokens during the open token sale will get 1000 TOSS tokens as an early bird bonus.

The project has launched a whitelist, the subscription box for it is located on the front page of the website.

“This whitelist with a bonus is different from a typical airdrop. Although like the airdrop it does carry a function of building up the community, there is a call to action that represents devotion and belief in the project by the community. We want to build our community with true supporters, not freeloaders”, says CEO PROOF OF TOSS Dmitry Starostenkov.

PROOF OF TOSS in the Internet

Learn more about PROOF OF TOSS at www.toss.pro and join the Whitelist.