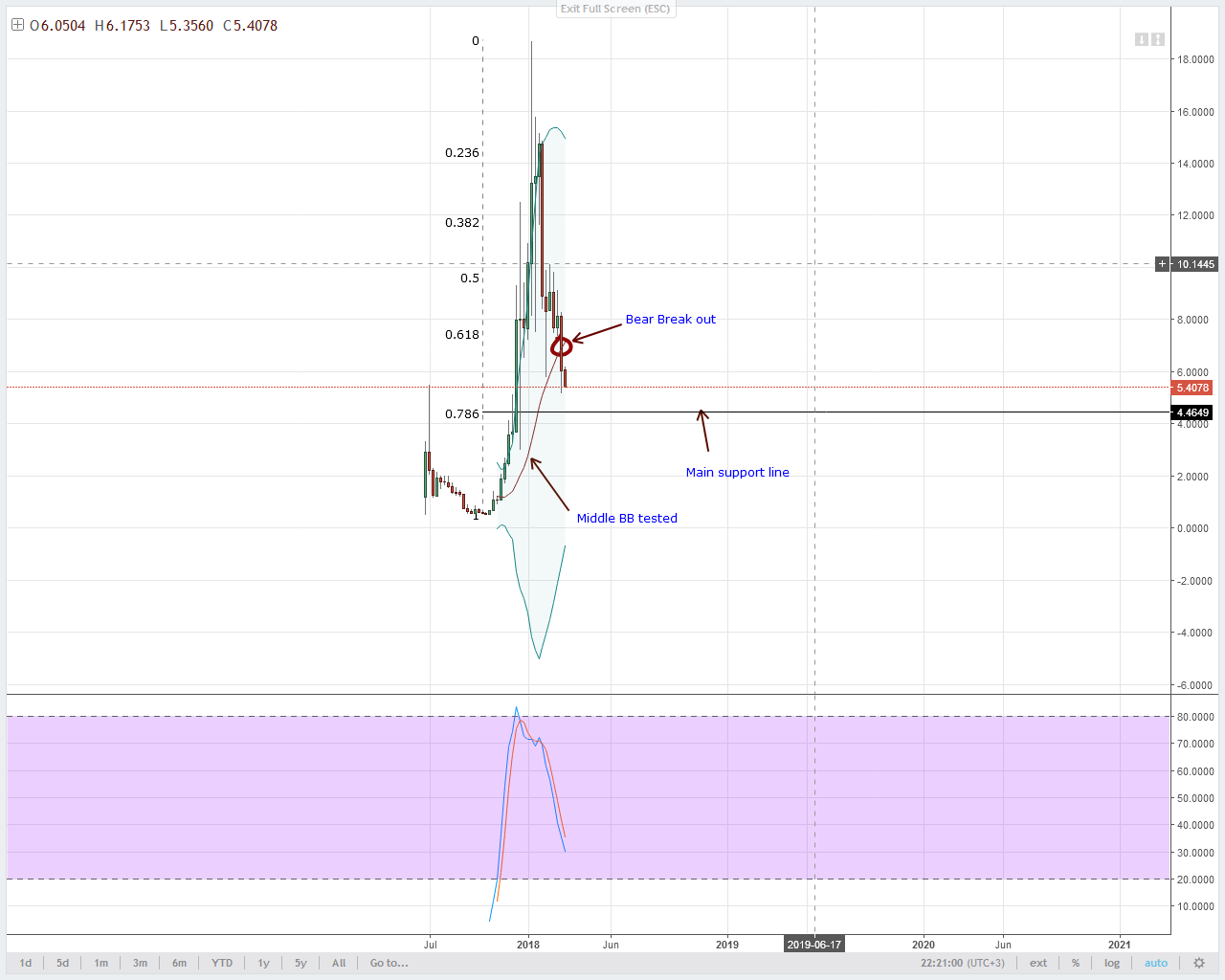 It’s bad guys and if anything, we can start meditating and hope Satoshi appears out of thin air to support BTC. Vitalik in the meantime can say something so nice to neutralize all this FUDs.

ETH and BTC drives cryptocurrencies prices and if there is indirect threat of their underlying economics through outright ban of ICOs without reconsideration or excessive regulation, prices tumble. They already are.

NEO, EOS, Lumens, LTC and NEM (despite recent higher highs) are on a meltdown. However, you are probably a trader reading this. The first reaction is to liquidate your DA holdings until BTC finds strong footing say at $5000 or there about. 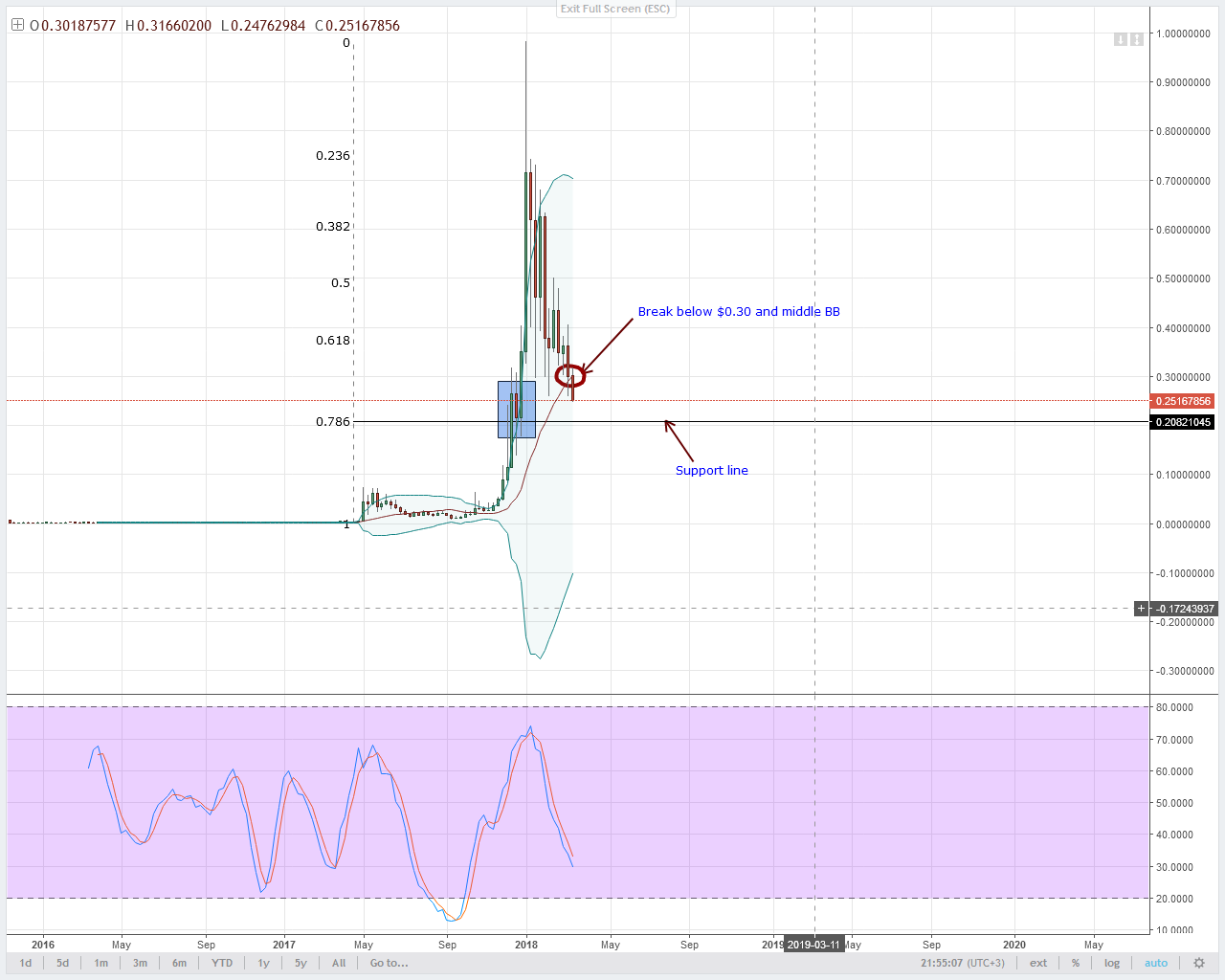 The slide is on guys. Taking cue from yesterday’s preview, we can confidently say that sellers are in charge. Yes indeed, Lumens prices are $0.05 away from the main resistance line at $0.30 and while at it, the slide and break below the middle BB in the weekly chart is nothing but chilling for positional traders.

Anyway, with this technical development, we should be aligning our positions and looking for sell entries in lower time frames. I will recommend selling Lumens with every retest of $0.28-$0.30 with immediate targets at $0.20 which coincidentally is the 78.6% Fibonacci retracement level and our key support line. 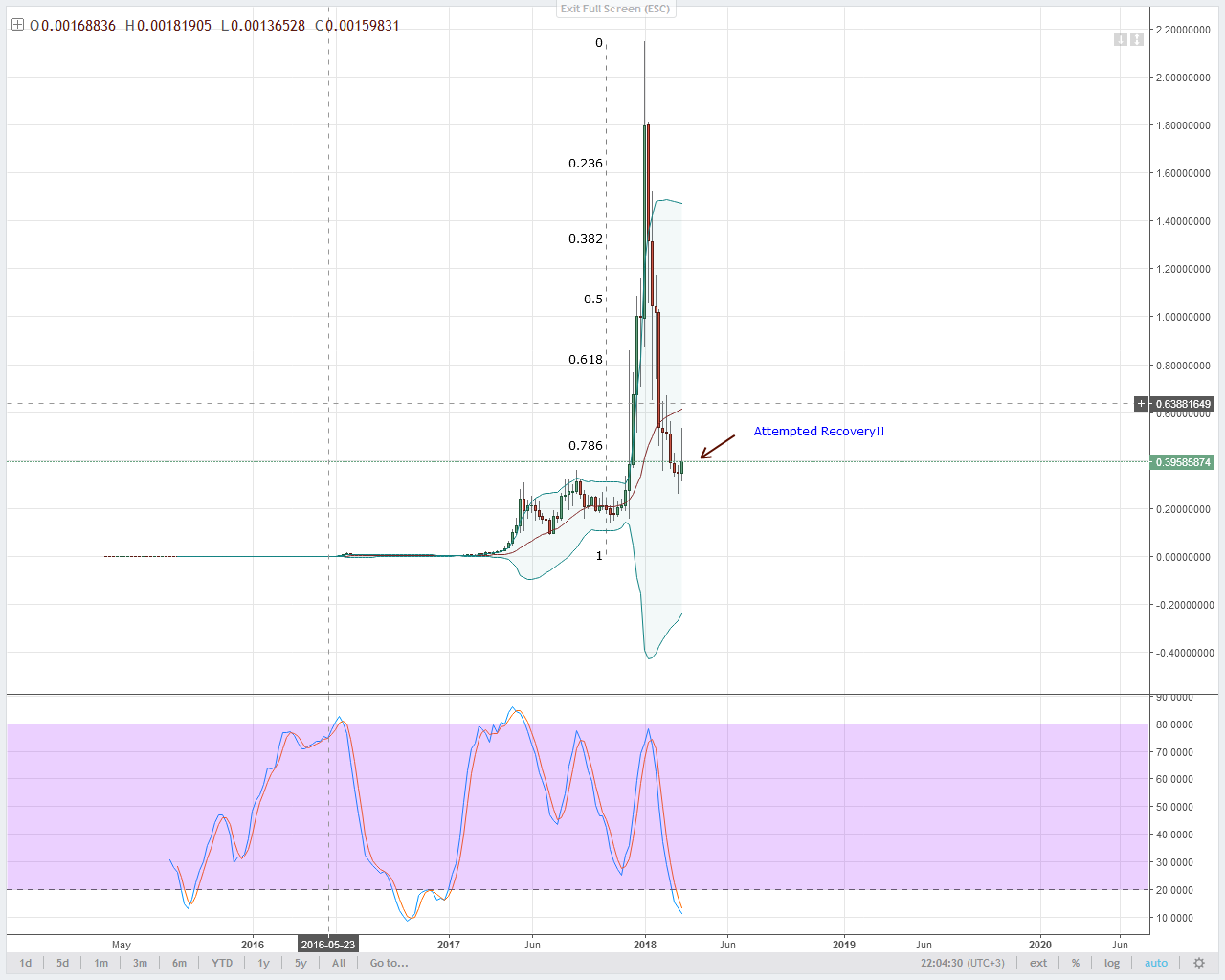 Admittedly, many thought NEM prices were finally on a recovery path after losing more than 90% of its value since peaking in late December 2017. Well, the appreciation has been short lived if current technical formation is anything to go by.

To begin, we can zoom out to the weekly chart and while NEM is still trading above last week’s highs, yesterday’s bear candlestick threatens to erode recent gains.

The altcoins slide in general will drag NEM down and that’s why I will be bearish despite the 15% gain on March 12-13. Any close below $0.25 and last week’s low will definitely invalidate this weak bull move.

On the contrary, if buyers “band” and drive prices past $0.60, there will be some flicker of hope for NEM. Before then, bears are fattening.

Picking out bottoms or tops is dangerous and catching a falling knife is not always something to smile about. In the daily chart, EOS prices were in a brief accumulation but that seem to be bread for bears.

Sellers are on the roll and even after some higher highs relative to the lower BB in the daily chart, the depreciation in the weekly chart is nothing but RAPID! Not only are sellers confirming last week’s bears but that close below the middle BB is worth noting.

Besides, even last year’s highs of $5.5 seem not to deter sellers. From the charts, immediate bear targets should be between $4.2 and $4.4 and remain that way until after there is a shift of momentum.

At the moment, every stochastic high in the lower time frames (<4HR) should be selling opportunities. 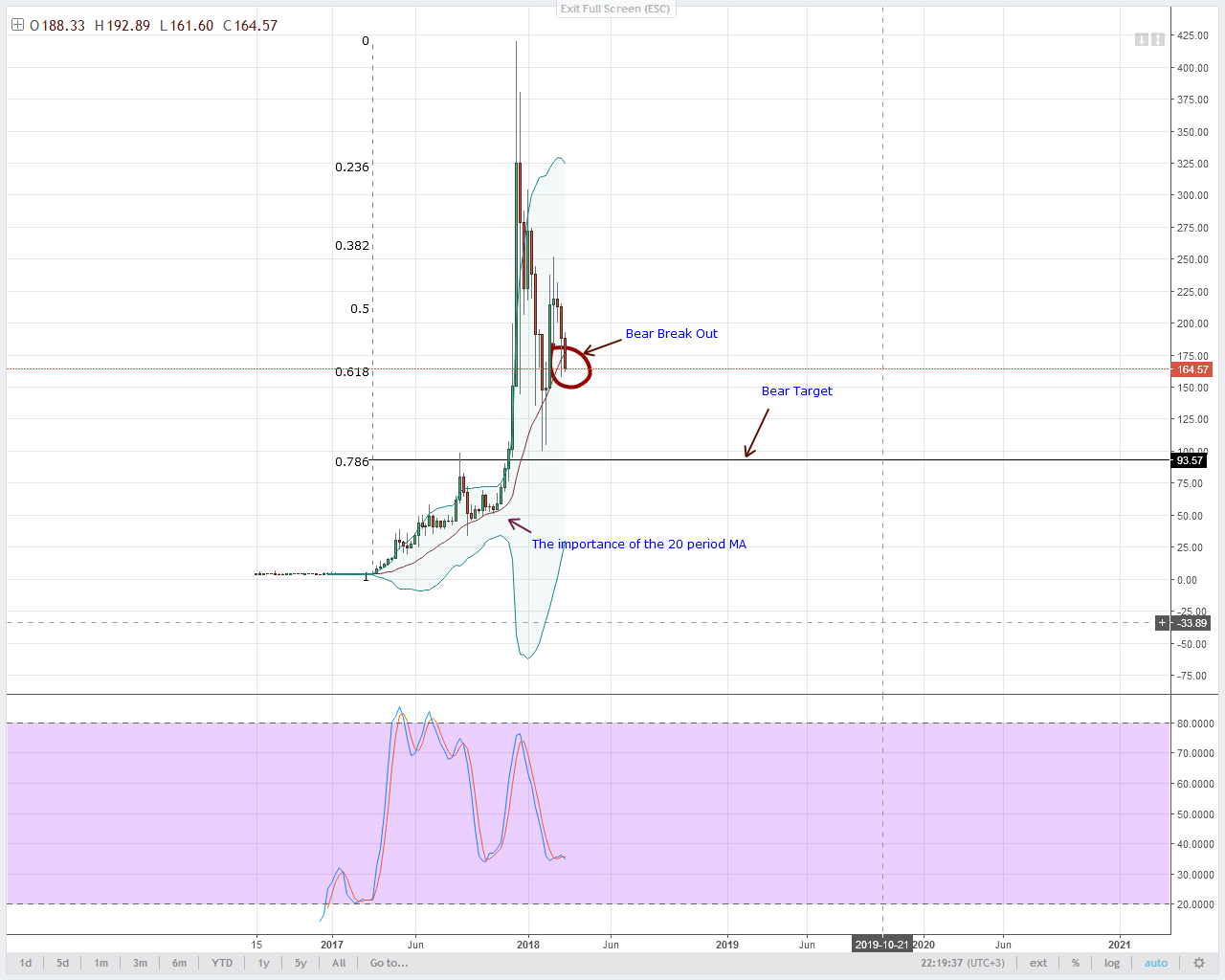 I must admit, LTC is on the sword and maybe Charlie Lee knew something! Damn! Even after a reprieve a couple of weeks ago, prices are now sliding down the roller-coaster and I mean this is hard to see!!

First, should this week end up bearish and below $200, then know for a fact that $100 is the next destination. That is not rocket science guys. If we infer historical set ups even from other securities and /or assets, a strong break below the 61.8% Fibonacci retracement of this coins high lows mean odds of prices testing 78.6% Fibonacci retracement level is high.

It’s the same pattern happening over and over again. At the moment, bears might hit $160, pause, recover slightly before the assault and the battle for $100 begins. That’s around last year’s highs and a main break out level. 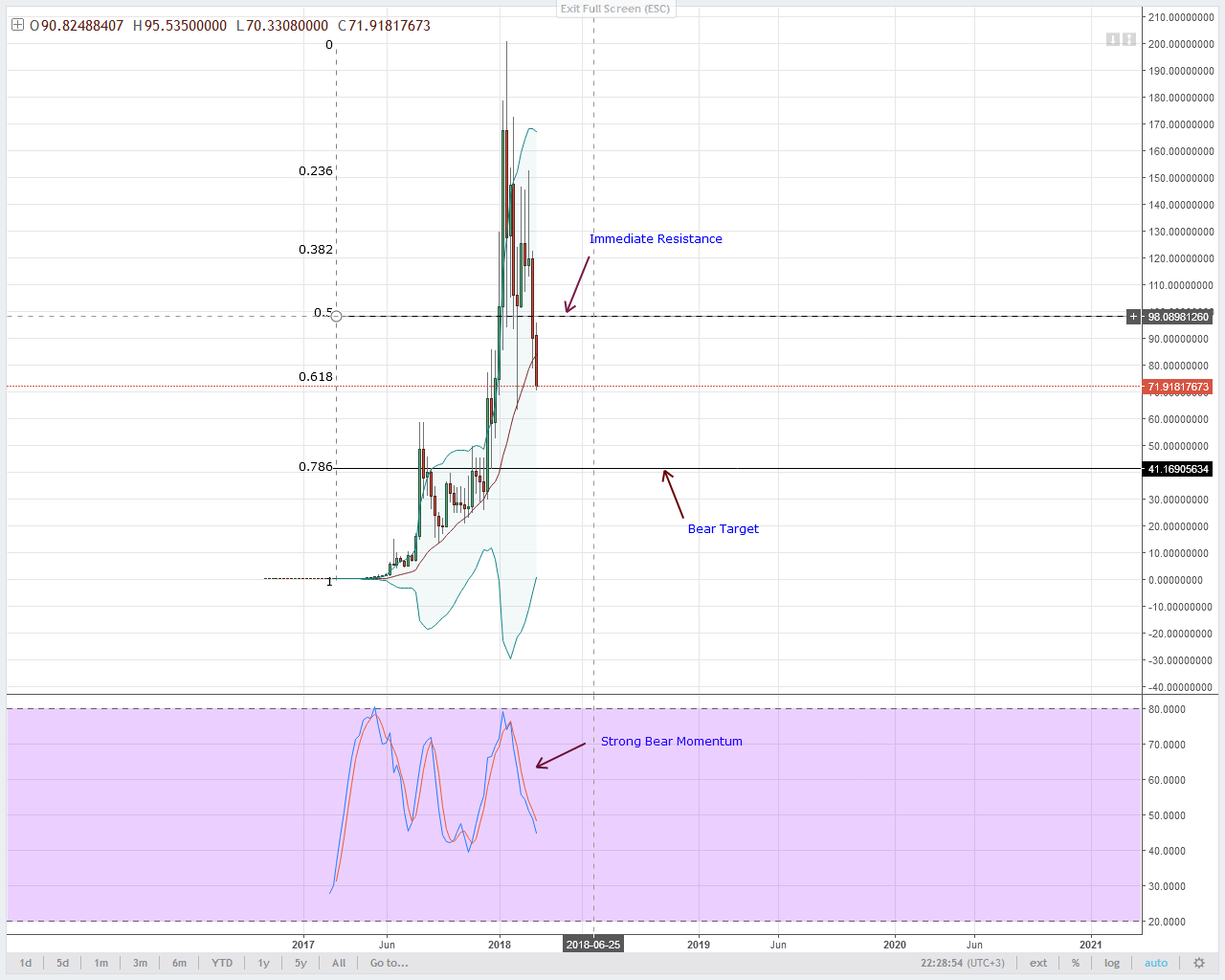 It’s a meltdown in NEO and this might rage on for sometimes. Well, maybe not forever but how about this facilitator losing more than 80% of its value? After all, this is the only coin under our radar that has been a tad bit resilient when bears were running havoc in IOTA and the likes.

In the weekly chart, it’s a shower moment and while we were hopeful of a slight appreciation towards $100, sellers are actually stepping on gas. NEO prices are actually trading below the middle BB.

Bear momentum is high, sellers are having field day! I recommend shorting on every stochastic high with ambitious targets of $40 with first pay load release at $55 or last week’s highs.