Next Article: Argentinian Bank to Use Bitcoin for Cross-Border Transactions

As it is, Bitcoin prices are basically in a consolidation and swaying within a tight $2,200 range with tops at $10,000. Regardless of recent swings, I’m net bullish and today, its likely prices might move higher and sync with April 15 bullish candlestick.

There are some pretty nice developments in the crypto world and because Bitcoin is the most dominant coin, expect to see wild allegation or over ambitious developments. One of them, depending on your view, is the rumor that there are solid plans of replacing SWIFT with the Bitcoin Network in Argentina. Well, this is definitely a BTC shot in the arm. However, the question is: Will the central bank and other dominant banks allow this? I expect a battle between affordability, transparency and decentralization and centralization, lags and inefficiency.

As things warm up, critics often assert their views whenever there is a BTC slide. Statistics shows that Bitcoin prices are down two percent in the last 24 hours and four percent in the last week. Now, despite being moderate losses, it’s fodder for critics. One of them is Joe Davis of the Vanguard Group. Joe cannot be convinced otherwise and sees Bitcoin sliding all the way to zero.

If you ask me, that’s extreme and should it come to pass, then it’s more than $100 billion down the drain. One of the reasons why they are so negative is the fluctuation of Bitcoin prices which contributes largely to their emphasis that Bitcoin is not store of value (SoV). Otherwise, Bitcoin meets all the other characteristics of money as an account of value and medium of exchange.

Perhaps this is the reason why Tangem has solid reasons why they are printing smart Bitcoin banknotes in domination of 0.01 BTC and 0.05 BTC.

It's been the longest, richest, most sleepless week in our recent history — we finally launched limited pilot sales both offline and online, garnered ?????????? demand from the whole world, and are now committed to grow across borders! You are all the very best!! ?? pic.twitter.com/4NNm7Sunwj

Hard to shift and can’t imagine transacting without “feeling” money? That’s the solution for you and a spur for adoption maybe? 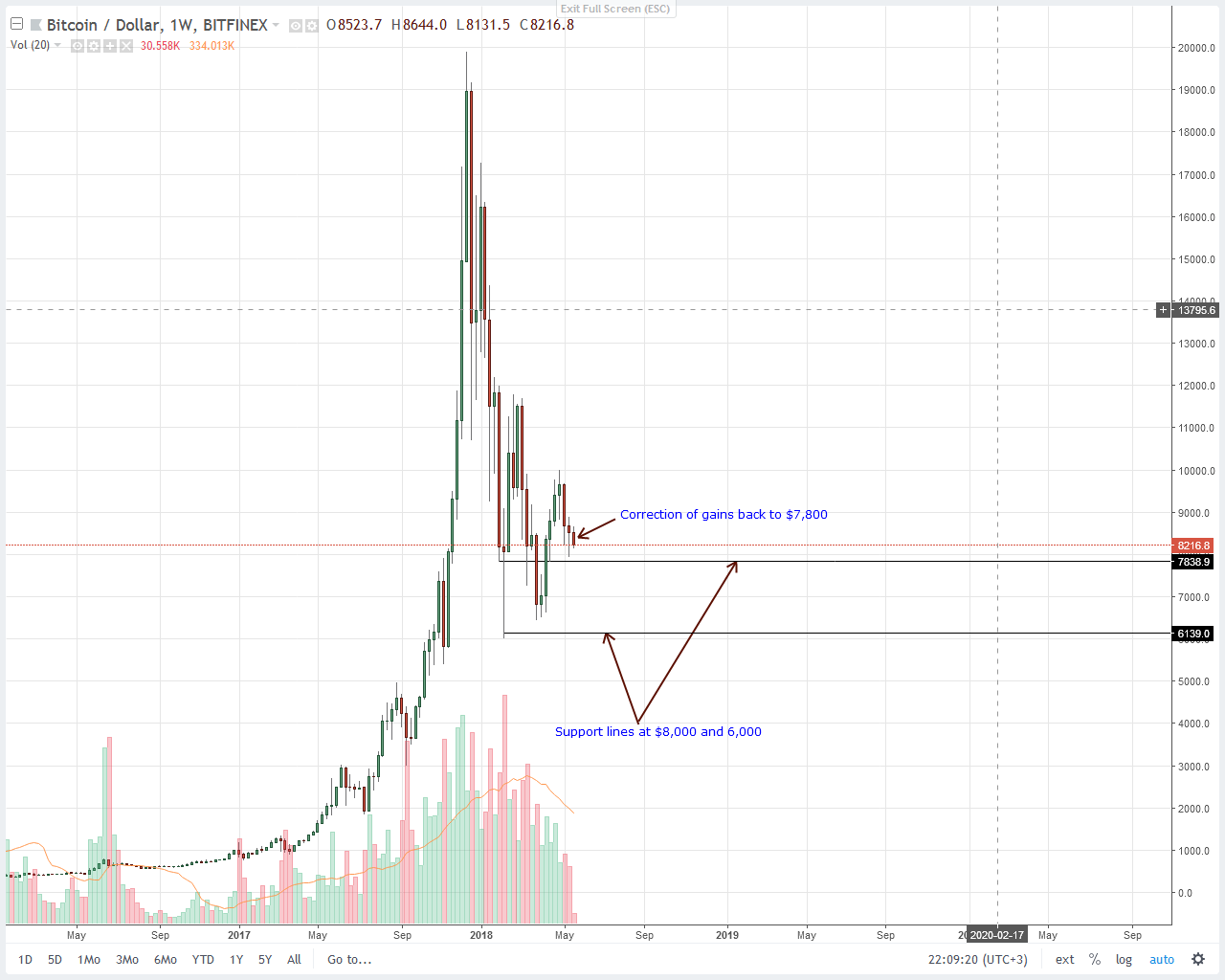 The follow through of week ending April 15 has been reversed and we are back within previous trading range within a consolidating market. Check out how the last six candlesticks are moving within a $2,200 range whose upper limits are at $10,000. If anything, that’s a Sine curve with anchors at around $7800, our main support line in lower times.

Now, here is the thing. We are interpreting these lower lows as short coverings with defining supports at April 22 lows, that’s around $7,800. Therefore, if we get any hints of rejection of lower lows in lower time frame charts as the daily chart, then we can wait for confirmation and load in the direction of week ending April 15 bullish candlestick. After all, market participation is low as these decreasing volumes past the last three weeks show. 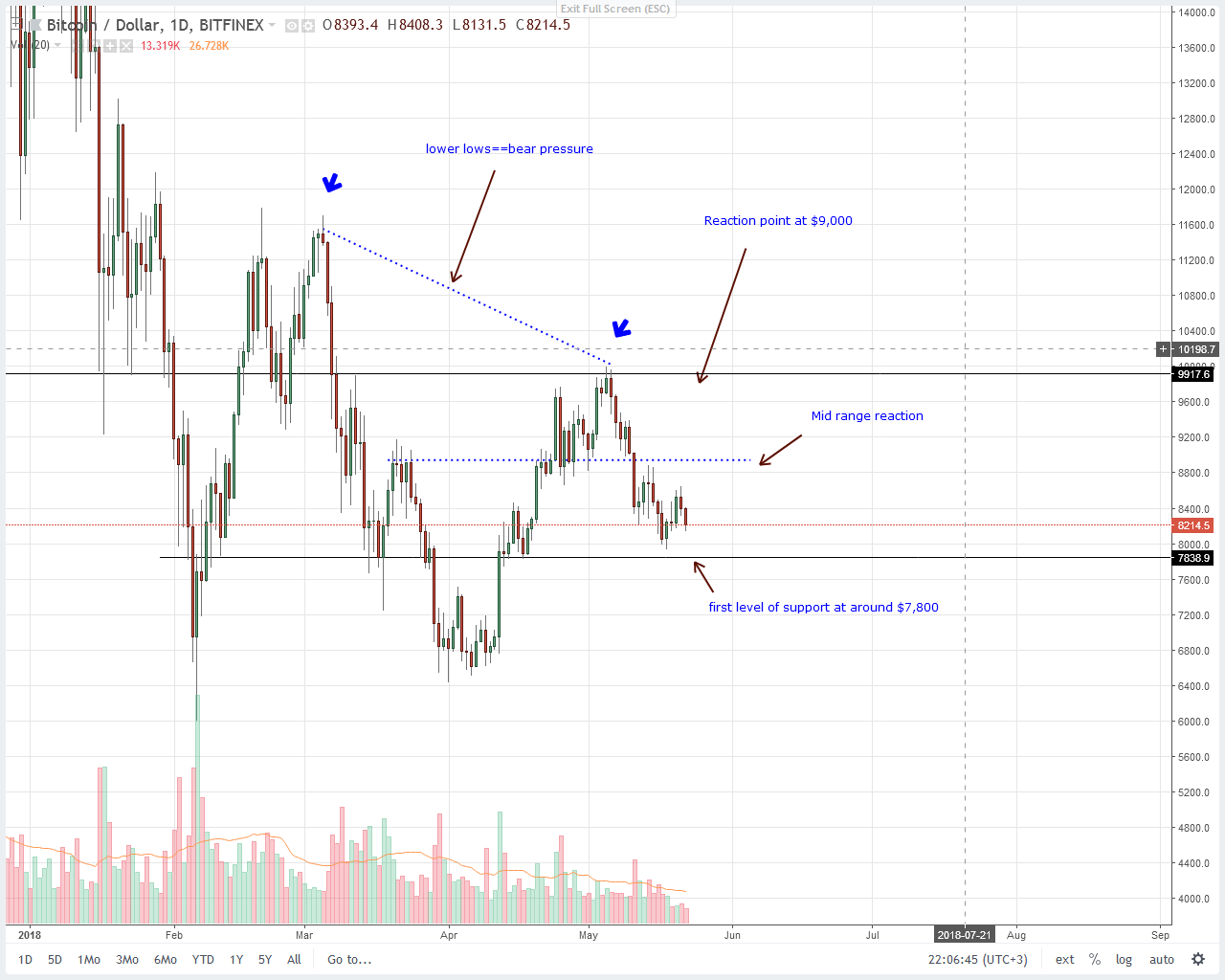 The reason why I’m positive and looking forward for Bitcoin upward trajectory? Well, it isn’t hard to see that prices are building up from May 18 bear pressure rejection and a consequent spike in market participation. There, it’s evident that despite the overall markets being bearish, there is a deal of buy pressure and thus the confirmation in the next two days to May 20. As it is, bears are driving prices lower but the last two candlesticks are still trending within May 20 bullish candlestick meaning there is more urge for upwards that downwards. Because of this, I will recommend looking for undervaluation in lower time frames and buying Bitcoin preferably at around $7,800 and $8000 or waiting for a break above$8,800 or May 20 highs.