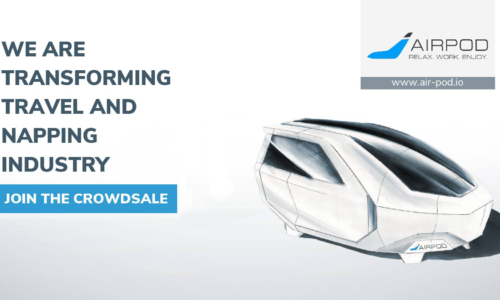 Next Article: Get Paid in Crypto for Watching Movies With a New Blockchain Platform

AirPod, the innovative blockchain-driven private capsule company is the Diamond Sponsor of the CryptoKonf 2018 conference, to be held in Belgrade, Serbia. The event covering Blockchain, FinTech, Compliance, Cryptocurrency and ICOs will be held on 29th and 30th May 2018. At the event, AirPod will also announce the launch of the APOD token crowdsale.

CryptoKonf 2018 is set to be the largest cryptocurrency and blockchain conference in SE Europe. The event will be held at Metropolis Palace Hotel, Belgrade, Serbia from 29th to 30th May 2018. The conference will also feature hands-on technical blockchain development workshops to the delight of developers. Renowned people in the cryptocurrency industry will grace and speak at the event.

Apart from supporting the event as a Diamond Sponsor, the representatives of AirPod will also present their project to the audience and the upcoming token pre-sale and ICO will be introduced during the opening speech. The presale of the tokens will start right after the presentation. The presentation will be transmitted over live-stream and interested investors can follow it live.

Why invest in AirPod

AirPod is the developer of the revolutionary AirPod sleeping pods. These are capsule-like private units that are designed to be used in public spaces such as bus station, airports, shopping centers, and hotels. The sleeping pod is the perfect solution for someone who wishes to do some work, take a nap or just relax in a private space without the need for them to leave the public space. The revolutionary sleeping pods have features such as a high-quality seat that can be transformed into a bed, free Wi-Fi, air conditioning among others.

To ensure transparency of transactions and ease the process of payment, AirPod has used blockchain technology and come up with a unique token known as APOD. The utility token will be used on the AirPod network as a payment option for services. Additionally, the token gives its owners an opportunity to earn stable and regular passive income via the sponsorship program.

The program that will be unveiled after the launch of the project will see every investor who has bought APOD tokens during the ICO become a sponsor of an AirPod unit. The program will allow them to earn up to 80% of the profits generated by the said unit on a monthly basis.

Investors interested in purchasing this utility token can do so during the upcoming presale, It will offer 200 million APOD tokens on sale with each token valued at $0.10. Those who will contribute in the ICO will see their tokens doubled during the sponsorship program. The success of the APOD token is guaranteed as it is influenced by the success of the AirPod business and not by the crypto markets.

What do you think about the APOD ICO? Do you agree that AirPod is set to revolutionize the travel and napping industries? Let us known your opinion in the comments section below.

AirPod Set to Announce Its APOD Token’s ICO During the CryptoKonf 2018 Conference was last modified: May 28th, 2018 by Guest Author